There is Help for Age-Related Sexual Dysfunction Many adults are sexually active into the golden years, but getting older also means increasing the likelihood of encountering problems that put a chill on sex. The good news is there are solutions to many age-related sexual problems.

Here are some common age-related sexual dysfunction issues for men and women, and what can be done about them.

Female sexual dysfunction is common, says OB/GYN Rachel Pope, MD, MPH, chief of Female Sexual Health at University Hospitals. But often women are reluctant to discuss it with their doctor.

Menopausal changes may have a significant effect on sexuality, Dr. Pope says. Loss of estrogen can lower desire and cause the vaginal tissue to become dry and less stretchy. These changes often begin during perimenopause, when hormonal changes are taking place.

It can be especially difficult for women to resume sexual activity if they had stopped having sex after menopause, she says.

“If a woman has gone through menopause years ago and they have not maintained sexual activity, they may experience pain if they do become sexually active again,” Dr. Pope says.

Decreased sex drive also happens frequently as women get older, Dr. Pope says. Intercourse can naturally drop off as people age. Some couples are at peace with it, but some resign themselves to it.

“Many women say this is not necessarily a problem affecting their relationships, but others say it bothers them a great deal,” she says.

Prescription medications used to increase desire include flibanserin and bremelanotide.

Illness or injury often interfere with sex as people age. Dr. Pope sees this especially among cancer patients. The cancer itself or the treatments can have lasting effects on sexuality.

“Many cancer survivors are struggling with intimacy and sexual function in their relationships,” she says. “There is help out there for them.”

Treatments mentioned above can help, as well as sex therapy.

Lichen sclerosus, a skin condition that affect the vulva, can hamper sexuality in postmenopausal women, as the lack of estrogen amplifies symptoms. Again, Dr. Pope says medications are available to treat it, but sometimes it’s a matter of making the correct diagnosis.

She urges women to talk to their doctors about sexual problems.

“A lot of women feel this is a small aspect of their life, or they’re embarrassed to talk about it,” she says. “I encourage them to do virtual visits. It doesn’t have to be a low priority. Sexual function really can improve quality of life, and there are treatments out there.”

Erectile dysfunction is the most common sexual problem for men as they get older, says urologist Nannan Thirumavalavan, MD, chief of Male Reproductive and Sexual Health at UH. About one in four men experience some form of ED.

“It’s incredibly common. At least half the guys by age 40 report some form of erectile dysfunction,” he says. “By age 70, most guys have problems.”

Diseases that affect the blood vessels, including heart disease, high blood pressure, high cholesterol and diabetes, can cause ED. Smoking, alcohol use, certain prescription medications, illnesses and psychological problems also contribute to ED. Prostate cancer treatments – surgery and radiation – are another common cause of sexual dysfunction.

In some cases, lifestyle changes such as diet, exercise and quitting tobacco can go a long way toward stopping the progression of ED, Dr. Thirumavalavan says. Managing diseases that affect the blood vessels also helps. And as we all know from TV commercials, ED medications that increase blood flow to the penis are available.

Penile injections with medication stronger than pills, implants and vacuum devices are also available for some patients who don’t respond to ED pills.

Dr. Thirumavalavan says certain therapies are offered, such as shockwave, stem cell therapy and platelet-rich plasma. However, these are considered experimental and whether any of them work is unclear.

ED can cause many complex problems for men, including relationship issues that extend well outside the bedroom, leading to depression, anxiety and stress,” Dr. Loeb says. “With so many great options for treatment, there is no reason not to bring it up with your doctor.”

“Low testosterone can happen at any age, but increases in incidence as men get older,” he says.

Doctors can determine low testosterone based on symptoms and blood tests. Often, low testosterone is accompanied by symptoms aside from diminished sex drive, including fatigue, irritability and erectile dysfunction. Testosterone replacement therapy may be recommended for men who are deficient. The treatment comes in various forms, including pills, gels and injections.

The bottom line is men shouldn’t be afraid to talk to their doctors about problems that affect their sex life.

“If pills don’t work, there are other treatment options,” Dr. Thirumavalavan says.

The UH Female Sexual Health Program brings together experts from a variety of medical, surgical and behavioral health disciplines who specialize in and understand the many components of female sexual health, including those caused by a physical/medical condition, a biological/chemical imbalance and/or psychological issues related to sexual intimacy. Learn more about the Female Sexual Health Program at UH. Female sexual dysfunction is more common than diabetes. But even though sexuality is important to most women over the majority of their lifetime,... 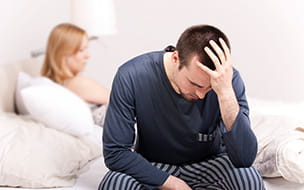 A Treatment For Erectile Dysfunction That's Beyond the Blue Pill