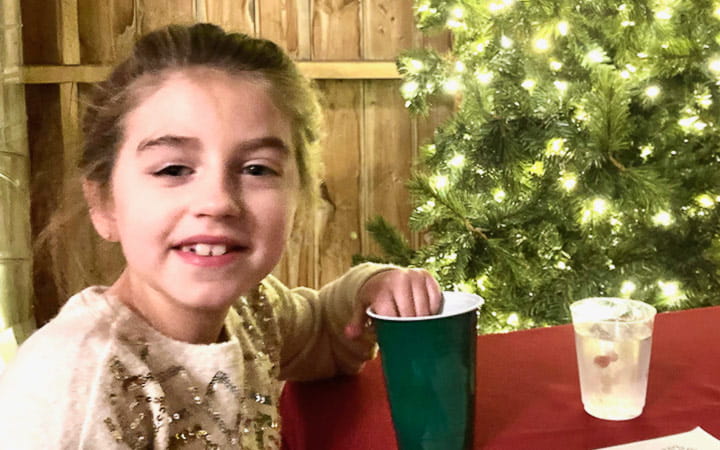 Ivy Williams, 7, loves to read. One of her favorite books is Amazing Amber and Her Lazy Laser Eye, about a superhero who uses an eye patch to strengthen her vision, allowing her to shoot laser beams out of her eyes and defeat a pie-throwing villain.

“I really want to be brave like Amazing Amber,” says Ivy, who was born with significant vision issues.

But here’s the truly amazing thing. To her parents and a team of doctors at the Division of Pediatric Ophthalmology at University Hospitals Rainbow Babies & Children’s, Ivy is a superhero, bravely persevering through multiple challenges to achieve near-perfect sight.

Ivy was born in 2015 with congenital ptosis in her right eye, which caused her eyelid to droop, blocking her vision. Her parents brought her to UH Rainbow when she was just eight days old. Before she turned one, she underwent five surgeries to adjust the position of her eyelid.

“We timed her surgeries around her major motor milestones,” says her mother, Jennifer. “Before she was ready to sit up, stand or walk, she’d have a procedure to correct her vision to help her take that next step.”

Soon after Ivy turned one, she was diagnosed with a related issue, strabismus, a misalignment of the eyes, which required another surgery.

As the UH Rainbow team of ophthalmologists, oculoplastic surgeons and optometrists worked to ensure the proper development of Ivy’s eyes, they were also managing an even more serious issue that had developed called amblyopia (‘lazy eye’). This occurs when there is a breakdown in the signals from the weaker eye to the brain. Over time, the brain can begin to rely more on the stronger eye, worsening the vision in the weaker eye.

“The brain actually needs to learn how to see,” says Faruk Orge, MD, chief of pediatric ophthalmology at UH Rainbow, who first saw Ivy in 2018. “We have a critical period until eight or nine years of age to fully develop vision. If the eye is not functioning during this time, it fundamentally alters the learning capacity of the brain to interpret those images.”

Treatment for amblyopia involves re-training the brain to force it to use the weaker eye by obscuring vision in the stronger eye. Ever since she was an infant, Ivy’s doctors had prescribed various methods to do this, including using drops in her stronger eye to blur her vision, or an eye patch to block her sight.

These methods became particularly challenging when Ivy got her first pair of eyeglasses and started school. But even though the temptation to remove her patch was strong, Ivy persevered. With her parents’ encouragement, and inspiration from Amazing Amber, she continued wearing her patch for up to 10 hours a day.

By the time she was four, the vision in Ivy’s right eye had plateaued at 20/100. Her cornea (the clear portion of the eye) had developed an irregular surface, distorting the light that entered her eye. A possible solution would be a rigid contact lens that would cover the surface of her cornea like a dome. But convincing a four-year-old to wear a contact lens is not easy.

UH Rainbow optometrist Adam Peiffer, OD, MS, who first met Ivy in December 2019, took on the challenge with innovative methods and a lot of patience.

“At first we just needed to get Ivy comfortable with the idea and feeling of putting a contact lens in her eye,” Dr. Peiffer says. He started with soft contacts with no prescription and eventually gave her contacts that corrected her right eye vision to 20/60.

By June 2022, Ivy was ready to take the next step. Dr. Peiffer used advanced equipment at the UH Rainbow Babies & Children’s PRISM (Pediatric Research and Innovation in Sight & Motility) Clinic and collaborated with SynergEyes, a California-based contact lens manufacturer, to help custom-design a hybrid contact lens for Ivy. The lens had a rigid center, which provides a smooth surface for light to enter, surrounded by a flexible “skirt,” which makes it more comfortable.

Jennifer remembers when Ivy received her new lens in the summer of 2022. “She immediately started seeing at 20/30,” she says. “My husband and I started crying because she had never seen that well. It was such a huge victory.”

Ivy had just one question. “Mom and dad, are you proud of me?” she asked.

They were. And so was Dr. Peiffer.

“It took years of work by a multidisciplinary team of pediatric experts to ensure that Ivy developed good vision in both eyes,” he says. “It also took out-of-the-box thinking, advanced technology and the ability to offer dedicated time slots to work one-on-one with young patients. These are the kind of services and the culture that make UH Rainbow unique.” And Ivy herself did the rest of the amazing work! Your Child's Eyes Need Protection From the Sun, Too

Most parents know they need to protect their children's skin from the sun. But many forget the eyes need protection, too. Nearly five out of 10... When Premature Birth Can Result in Eye Problems

When retinopathy of prematurity doesn’t resolve on its own, various treatment options are available. Either way, ongoing follow-up with a...