Can Vaping Cause Erectile Dysfunction in Men? 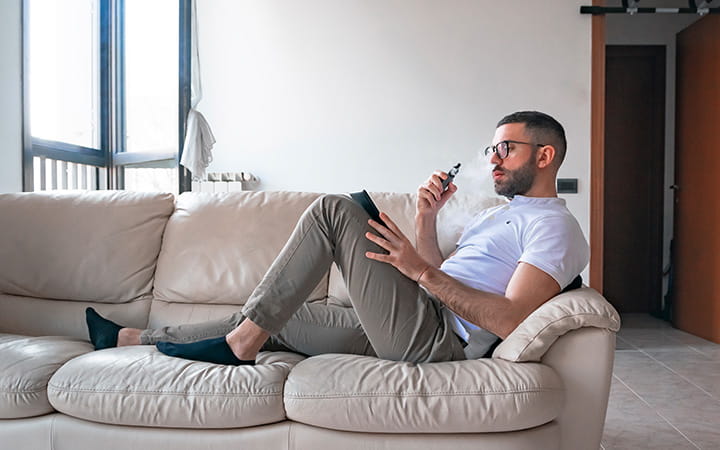 Just like smoking cigarettes or using nicotine gum or patches, vaping is a method by which nicotine is delivered to the body – the whole body, including the reproductive organs. And there is a growing body of evidence that nicotine may be associated with erectile dysfunction in men, regardless of age and other health conditions.

The second most common way to take in nicotine, vaping involves the use of an electronic cigarette that holds liquid nicotine that is vaporized and inhaled by the user. Many believe this is a safer way to take in nicotine because the user avoids the thousands of chemicals in cigarette smoke. Although this is true, we also know that nicotine alone, regardless of how it is delivered, poses many significant health risks.

The Body’s Response to Nicotine

Nicotine is a highly addictive substance found naturally in tobacco. When introduced into the body, regardless of the method, it stimulates the central nervous system to release the hormone adrenaline – a chemical response that is normally associated with stressful or dangerous situations.

The release of adrenaline prompts several physiological changes in the body’s cardiovascular system, including increased heart rate, blood pressure and breathing rate. In addition, the nicotine itself has a vaso-constrictive effect, meaning it shrinks and tightens blood vessels – reducing the amount of blood that can flow through them. This reduces the body’s ability to effectively transport oxygen and can lead to lower energy levels and shortness of breath.

These physiological responses happen every time nicotine is delivered to the body – putting the body into a state of high-stress over and over again. Ironically, although nicotine stresses the body, it simultaneously relaxes the mind. It can lead to pleasurable feelings of relaxation, euphoria and heightened alertness. For many people, the positive sensations override the negative physical effects and they become addicted to nicotine.

Sexual Side Effects of Nicotine in Men

Getting and maintaining an erection is dependent on a strong, steady flow of blood into the spongy tissue and smooth muscles of the penis. During sexual arousal, certain chemicals in the lining of the blood vessels in the penis allow the penile muscles to relax and accept the additional blood flow. These same chemicals then create a seal to “trap” the blood in the penis, creating an erection.

As mentioned previously, nicotine causes blood vessels to constrict, reducing blood flow to all the organs, including the penis. Therefore, men who smoke or vape, are at higher risk for experiencing erectile dysfunction (ED). Sexual health may then be further diminished by the man’s emotional response to incidents of ED, which may include shame, depression, anxiety and feelings of inadequacy.

A Growing Body of Evidence-Based Research

The effects of vaping on sexual health in men is supported by an increasing number of studies that link its use with erectile dysfunction, loss of libido and slower arousal times. In fact, it has been found that men who vaped on a daily basis were more than twice as likely to experience ED when compared to those who never vaped. Research also shows that health problems, including sexual health issues, are directly related to how much, and how often, nicotine is used. In other words, the more you vape (or smoke), the worse its effect on all aspects of your health.

“In one study of over 13,000 men, about 4.8 percent reported e-cigarette use and were more than twice as likely to report erectile dysfunction,” says Nannan Thirumavalavan, MD, a fellowship-trained urologist who specializes in male infertility, microsurgery, sexual dysfunction and men’s health. “The risk of ED is even higher for men who formerly smoked regular cigarettes before switching to vaping. This relationship holds true regardless of age and other risk factors, including cardiovascular disease,” he adds.

Vaping is not a Safer Alternative

Even though vaping doesn’t deliver the toxic chemicals contained in cigarette smoke, it is still very bad for your health. Unfortunately it has become popular among younger men with one study finding that 23.1 percent of e-cigarette users had never smoked cigarettes and most were younger than 35 years old. This may explain why ED is becoming more common in younger men.

To improve your overall health, including sexual health, our experts strongly recommend that men cut down or quit smoking or vaping altogether. If you smoke or vape to deal with stress and think it may be contributing to your erectile dysfunction, you may want to consider participating in a smoking cessation program to help wean you off of nicotine.

And remember, the men’s health specialists at the UH Urological Institute have the experience and expertise to diagnose and treat men with sexual health problems, including erectile dysfunction, regardless of the cause. Secondhand Smoke and Secondhand Vaping: Both Bad for Kids

You’ve probably heard about the health risks of secondhand smoke. Now there’s growing evidence that being around vaping is also risky for kids.