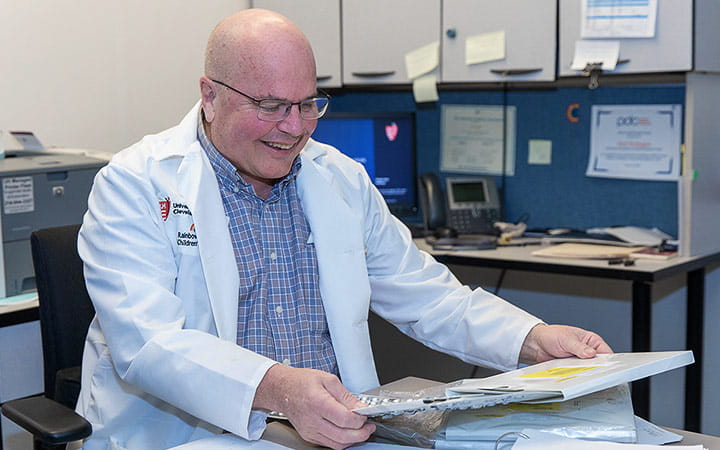 UH Rainbow Babies & Children’s Hospital has been at the forefront of diabetes research for that same century. As groundbreaking as insulin was at the time, experts say the greatest advancements in diabetes management have occurred in the last few decades.

Paul McGuigan, Certified Diabetes Care and Education Specialist and diabetes patient, has had a front row seat to the evolving field of endocrinology. He was one of the first to use an insulin pump to manage his type 1 diabetes as a participant in the Diabetes Control and Complications Trial – a clinical trial he is still an active participant in today!

Paul was diagnosed in 1984. In his mid-twenties building a successful painting and wallpaper business at the time, he shrugged off the constant thirst and 50-pound weight loss. It was one of Paul’s six siblings who finally convinced him to see a doctor.

As it turned out, Paul was in severe diabetic ketoacidosis; his blood sugar was over 1,000 mg/dL. It was a miracle he was still talking and walking. After spending one week in the hospital and receiving the official diagnosis of type 1 diabetes, Paul went home with instructions to give himself one shot of long acting insulin each day and monitor the sugar in his urine.

Shortly thereafter, he made what Paul calls “the phone call that changed my life forever.” He was answering an advertisement in University Hospitals’ House Calls magazine looking for adults who had recently been diagnosed with diabetes to participate in a research study.

This phone call was the beginning of his nursing education. An education that turned in to a career change and work at University Hospitals Rainbow Babies & Children’s Hospital. At UH Rainbow, Paul learned of a type 1 diabetes camp for kids. And it was one summer volunteering at Camp Ho Mita Koda where he met his future wife. The two later celebrated their wedding reception at camp, with Paul’s UH Rainbow colleagues and mentors in attendance.

“I did some of the best work of my life there at Camp Ho Mita Koda,” says Paul. “Many of the kids I worked with at camp ended up being my patients.”

Paul was a nurse with the pediatric endocrinology team for years. He was uniquely qualified to care for and comfort his patients as he managed his own type 1. In 2005, he switched his focus from clinical to research for an opportunity of a lifetime – Paul become UH Rainbow’s site coordinator for the NIH-funded study called Treatment Options for Type 2 Diabetes in Adolescents and Youth or TODAY.

TODAY and it’s follow up TODAY2 were first-of-its-kind trials in the nation, comparing treatment approaches in obese youth with new-onset type 2 diabetes. The study found that people with type 2 diabetes diagnosed during youth have a high risk of developing complications at early ages and have a greater chance of multiple complications within 15 years after diagnosis. Rose Gubitosi-Klug, MD, PhD, Division Chief of Pediatric Endocrinology at UH Rainbow and Professor of Pediatrics at CWRU School of Medicine, was the TODAY2 study Vice-chair and Paul’s guide through the years of data collection and reporting. “When I started this work, I didn’t even use a computer. E-mail didn’t exist. I also wasn’t aware kids got type 2 diabetes, at the time it was an adult disease,” says Paul. “TODAY helped us figure out how to take care of youth onset type 2 diabetes, but there’s much more work to be done. Thankfully the next generation of researchers won’t need an entire office to store hundreds of three-ring binders!”

Another recent advancement in diabetes care Paul considers critically important is the continuous glucose monitor (CGM), a small wearable device that provides an interstitial glucose value every five minutes. UH Rainbow participated in the study that found CGMs are an effective tool for even very young children with type 1 diabetes, and is even more helpful to parents who have spent many a sleepless night since their child’s type 1 diagnosis.

“We are with families on arguably the worst day of theirs lives, when they receive news of the lifelong condition. As caregivers, anything we can do to lower that burden, we do,” says Paul. “These new technologies like CGMs and inhaled insulin we will be studying this year, are truly remarkable to me, having witnessed such dramatic improvements and benefits to the quality of life firsthand throughout my career.”

The UH Rainbow Pediatric Endocrinology research team is applying for NIH grants to continue the great work that began with TODAY. Despite the nontraditional path to his career, Paul says he wouldn’t change a thing, and is grateful for every day with his family and his UH Rainbow work family. A recent study says people who develop type 2 diabetes as children or teens are at high risk of developing complications from the disease as soon... The children were participants in a pivotal trial of a tubeless insulin pump that continuously adapts insulin delivery levels based on blood sugar...