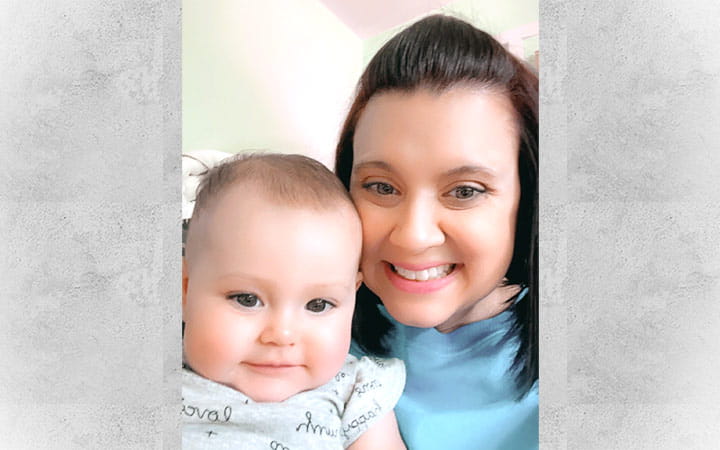 Jana Thomas and her daughter.

Jana Thomas knew something was wrong a few days after giving birth to her second daughter in March 2021.

“I just didn’t feel right,” the 38-year-old says. “I felt off, but wasn’t sure what was going on. My heartbeat was very slow. I could feel it beating slowly in my chest and thought it was odd, but didn’t know what to do.”

When she described her symptoms to people, most told her she was stressed and tired from recently giving birth. But nine days after her daughter’s delivery, her symptoms became more serious: pressure in her chest, pain that radiated to her jaw, and a tingling sensation in her left arm. Jana checked her own blood pressure which she discovered was very high. She told her husband to get her a chewable baby aspirin and call 9-1-1.

At the hospital in her hometown of Marietta, Ohio, doctors ran tests that didn’t immediately identify Jana’s problem.

“I came to the hospital and they thought I was young and healthy and couldn’t be having a heart attack, even with all of the typical symptoms,” she says. “I think everyone thought I was overwhelmed from just having a baby.”

After hours at the hospital, one doctor decided to run Jana’s troponin levels a second time. Troponin is a protein found in cardiac muscle fibers and when there is damage to heart muscle cells, it’s released into the blood. This time, her troponins were elevated.

“I was almost sent home having an active heart attack,” Jana says.

Even when examined in the cardiac catheterization laboratory, Jana’s caregivers didn’t know what they were seeing. They couldn’t find the cause of the heart attack. But one, by chance, had previously worked at University Hospitals. He suggested Jana transfer care to UH.

“When our team looked at Jana’s images, we immediately recognized that she had suffered a SCAD,” says Heather Gornik, MD, Co-Director of the Vascular Center at UH Harrington Heart & Vascular Institute and a national expert in SCAD.

SCAD stands for spontaneous coronary artery dissection. The condition causes a small percentage of heart attacks overall, but is responsible for 40 percent of heart attacks in women under the age of 50, says the American Heart Association. The average age of a patient who suffers a SCAD is just 42. Jana’s SCAD involved one of the main arteries of the heart, the left anterior descending coronary artery and may also have involved another one of the coronary branches.

Symptoms of SCAD include chest pain or discomfort, shortness of breath, nausea, lightheadedness, sweating and pain in the shoulders, arms, back, neck or jaw.

“Like Jana, patients who have SCAD are generally healthy and have no or few risk factors for heart disease. They aren’t generally overweight, smokers or diabetic, so even if they seek treatment for classic heart attack symptoms, they’re often misdiagnosed with problems like anxiety or indigestion,” Dr. Gornik says. “Post-partum SCAD is a particularly serious condition with a higher risk of severe heart damage and poor outcomes. Unfortunately, symptoms of post-partum SCAD may also be dismissed as being related to the anxiety and stress of the post-partum period, and there can be a delay in making this diagnosis."

Misdiagnosis of SCAD can lead to treatment that may cause more damage.

Based upon imaging studies of the vessels of the body outside the heart, Dr. Gornik and the UH team also diagnosed Jana with fibromuscular dysplasia. This disease causes cells to grow abnormally in artery walls and is seen in about half of people with SCAD. Jana was also found to have had a dissection in one of her carotid arteries that supplies blood to the brain.

During her hospital stay, Jana was closely monitored and treated with medications. When she was discharged, Dr. Gornik told Jana to get to an emergency room if she experienced certain symptoms including symptoms of SCAD or even a severe headache.

Three weeks later, Jana began feeling lethargic with a terrible headache. Once again she rushed to her nearest local hospital and once again she felt she wasn’t taken seriously and treated with enough urgency.

“Especially the second time, I had to be like, ‘Look, this is what I have. This is what I need, now!’” she says. “I’m a mom of two little girls. They need their mom. I have to be there for them.”

It took two days before she was once again transferred to UH in Cleveland where it was discovered her SCAD had worsened and she had experienced another heart attack. A repeat coronary angiogram showed she developed a rupture with an aneurysm in her left anterior descending coronary artery. She underwent emergency open heart surgery performed by UH cardiac surgeon Joseph Sabik, MD. Dr. Sabik is Chairman, Department of Surgery and Surgeon-in-Chief at UH Cleveland Medical Center.

“Jana developed a very severe complication following her initial SCAD with both worsening of the original tear in her coronary artery and an actual rupture of this artery. Her case is one of the most severe cases of SCAD I have cared for at UH, and I feel very fortunate this was discovered here at UH, where I was able to call upon my skilled and experienced cardiac surgical colleagues to rapidly mobilize to perform emergency life-saving surgery,” Dr. Gornik says.

Jana says, “The most important thing I think needs to be expressed from my story is that women, especially after having a baby, need to be okay with speaking up if something is off. You have to advocate for yourself and be willing to go elsewhere if people where you are aren’t listening.”

Several months later, Jana says she feels good. She takes medications and participates in cardiac rehab. Her heart status and her blood vessels outside the heart affected by fibromuscular dysplasia are being monitored. She’s joined a Facebook support group for SCAD patients and has participated in the UH virtual patient information and support group for patients with fibromuscular dysplasia and SCAD.

“I am hopeful that with quality follow-up care, Jana will remain healthy and be able to put this traumatic series of events in her past and move ahead with her life. I’m excited for her long future ahead as a mom to her two babies,” Dr. Gornik says.

“I’m so thankful to be here with my daughters,” Jana says. “I’m gaining strength and confidence in my body every day.” 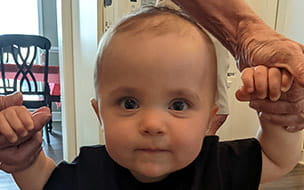 Vinny’s complex congenital heart disease was detected before he was born. Mom and Vinny’s health were followed closely during pregnancy by the...