Cooking Out? How to Avoid the Potential Health Hazards of Grilling 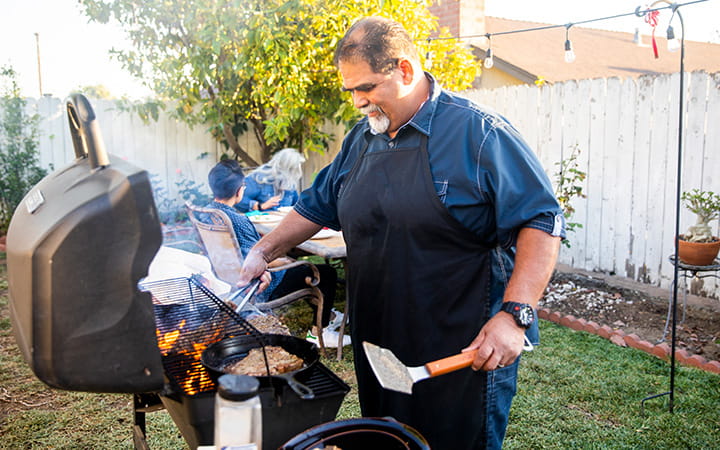 Outdoor grilling is one summer’s great pleasures, but the alluring sound of sizzle and smell of smoke also can mean possible health hazards.

Cooking meat at high temperatures creates compounds that are linked to cancer. The compounds, polycyclic aromatic hydrocarbons (PAHs) and heterocyclic amines (HCAs), form when beef, pork, poultry or fish are cooked over an open flame or using other high-temperature methods.

High heat creates HCAs – that’s the black char on grilled food and the coating that accumulates on grill grates over time.

Fat dripping onto hot coals or wood creates smoke containing PAHs. The smoke then coats the meat with the carcinogenic compounds. PAHs are a risk when grilling or smoking meats, even though smokers cook at lower temperatures.

These chemicals have been shown to damage DNA, which may increase risk of certain cancers. Studies have shown the carcinogenic effect in animal research.

While no definitive link has been made between the chemical compounds in cooked meat and cancer in humans, evidence has been accumulating. A 2017 study found that among women diagnosed with breast cancer, those who consumed large amounts of grilled, smoked and barbecued meat had a higher risk of dying.

It’s unknown how much you would have to eat over time to pose a concern. The type of meat and how long it’s cooked affect the level of HCAs and PAHs.

Jacqueline Wolff, a dietitian at UH Parma Medical Center, says if you eat barbequed meats once in a while, you’re probably safe. But she suggests limiting consumption and offers these tips to minimize exposure to the compounds:

Also, be sure to clean grill grates after each use to keep harmful chemicals from sticking to your food. If you use a wire brush, be sure to wipe the grates down with cloth or paper towels afterward in case any brush bristles break off and stick to the grill.

Wire brush bristles have been known to get into food. If accidentally ingested, they could cause serious problems, such as puncturing tissues in the throat or perforating the intestinal tract. So wipe down your grill with a cloth or wadded up paper towels after scrubbing it with a wire brush.

At University Hospitals Seidman Cancer Center, our team of caregivers provides the most advanced forms of cancer care, from prevention, screening, diagnosis, treatment through survivorship. Our single disease-focused teams design personalized cancer treatment plans for every patient who entrusts their care to us. Learn more about cancer services at UH Seidman Cancer Center. What Cancer Patients Need to Know About COVID-19 Vaccines

Whether you should get vaccinated depend on many factors, such as the type of vaccine, the type of cancer you have or have had, if you are in...