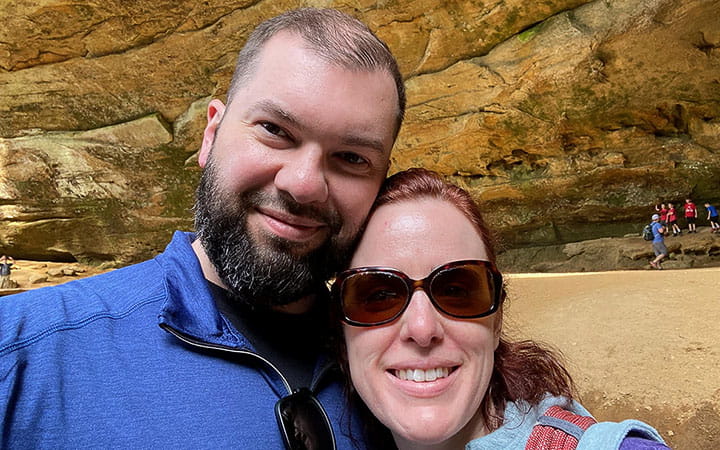 Quick action by his wife and teamwork by the health care providers in the UH comprehensive stroke system saved Matt Antenucci, 38, of Mentor, from the debilitating effects of stroke.

Matt felt strange after trying to buckle his 3-year-old nephew into a car seat following an afternoon of shopping with him and his wife, Laura, at a local discount store.

He couldn’t get the buckle to snap, so he stood up and stretched for another go at it, when something went drastically wrong.

“I stood up to kind of stretch, and I thought, ‘This is weird,’ and I froze right there," he says. “I became paralyzed.”

Laura asked if he was okay, and Matt just stared at her.

“I couldn’t say anything, but I could see her,” Matt says. He did not know it then, but he was having a stroke. His right side was completely paralyzed.

Laura got him into the car and quickly called 9-1-1. Fortunately, the Mentor Fire Department is located a short distance from the store parking lot.

“I was very lucky where it happened, how it happened -- the timing of everything was kind of ideal for that situation because they got me care very quickly,” Matt says. “I was at the right time at the right place for the wrong situation.”

Emergency medical services arrived in minutes and took him to Lake Health’s TriPoint in Concord, where emergency room caregivers consulted with neurologist Anthony Furlan, MD, the neurology attending physician that day at UH.

As the “stroke care quarterback,” Dr. Furlan determined Matt was an eligible candidate for the clot-busting medication tPA and for further treatment at UH. The team at Lake Health, which is the newest member of UH’s fully integrated comprehensive stroke network, gave him tPA and then put him on board a helicopter to UH Cleveland Medical Center in University Circle.

Although he couldn’t move the right side of his body, Matt could remember everything that happened from the time of the stroke, such as the ambulance ride, the helicopter flight and going into surgery for clot retrieval and stent placement.

“It’s kind of weird. I couldn’t move, I couldn’t talk, yet I can remember it all,” Matt says.

At UH Cleveland Medical Center, he was taken straight into the angio suite, where a stroke team led by Yin Hu, MD, UH Division Chief of Neurological Surgery, was prepped.

Matt found it reassuring to hear Dr. Hu say he was going to be okay. “We got you,” he remembers the doctor saying. “He had a good bedside manner,” Matt says.

Dr. Hu says the stroke was caused by an embolism, or clot, in the cervical carotid artery, one of the main arteries that supplies blood to the brain.

“In younger patients, like Matthew, one of the causes of a stroke is a dissection of the cervical carotid artery,” Dr. Hu says. “A dissection is an injury to a blood vessel where a layer is peeled away from the vessel wall. The dissection causes an embolism to be sent to the area of the injury.”

Dr. Hu used a minimally-invasive procedure called mechanical thrombectomy, in which he carefully threaded a catheter through the arteries to the site of the clot, while monitoring the journey with a continuous X-ray.

Next, he inserted a tiny net-like device called a stent retriever into the catheter and guided it to the blockage. He then pushed the stent retriever through the clot. The retriever was then expanded to the size of the artery wall and captured the clot. Dr. Hu then pulled the clot out backwards, removing it entirely.

“We were able to aspirate the clot, completely opening up the blood vessels on his left side of his brain," Dr. Hu says. “Then we placed a stent on the way out, where the dissection occurred because it was reducing the amount of blood to his left side of the brain.”

The procedure was done in an hour and Matt was taken to the neurosurgical intensive care unit.

By the next day, Matt was up and awake but unable to speak and a bit groggy from medication.

By Tuesday, he was up and walking, and in the afternoon he said hi to a nurse, but his speech was limited to one or two words at a time. By Wednesday, he could say small fragments of sentences, but he wasn’t making sense. Michelle York, UH speech language pathologist, helped him slow down a bit and think out the words.

Three days later, he was transferred to the UH Rehabilitation Hospital in Beachwood. His fine motor skills hadn’t yet returned to his right hand, but he was well enough to go home after his rehab stay.

Strokes in young patients are uncommon, but when they do occur, an artery dissection is a common cause in up to 20 percent of young adults, Dr. Hu says. “The true incidence may be higher since many cases may go undiagnosed due to minor self-limited symptoms.”

UH neurologist Sophia Sundararajan, MD, who has been seeing Matt for follow-up care, says these kinds of tears in the inner lining of the carotid artery can be the result of putting the neck in an awkward position.

“The most common causes of dissection are due to trauma but also can be seen with stretching and twisting of the neck,” she says.

Language was Matt’s biggest challenge in recovering. “I had to talk cautiously at first. I had to say it in my head before talking out loud for the first couple of weeks after I got home,” he says.

Text messages baffled him. Although he could see the words, the sentences didn’t make sense. He continued speech therapy at Lake Health in Mentor for two months and slowly, his reading comprehension came back.

On Feb. 15, 2021, just a little more than two months after the stroke, he returned to his job as a general manager of manufacturing at Brennan Industries in Euclid. He gradually worked up from half days to full days. Although fatigue sets in now and then, he feels good.

Dr. Sundararajan says Matt is recovering very well. “This is because his wife quickly recognized his stroke and got him to a hospital quickly, which allowed him to get aggressive treatment before the brain had too much permanent injury,” she says. “He has had to work with therapy, but is at the point where most people meeting him would not notice anything wrong.”

Dr. Hu says, “He recovered so well because the EMS and other ancillary staffs were able to get him to us in a timely fashion for us to perform our parts. Without them, it would have been too late. We just want to thank all the medical staffs and participants involved in his initial diagnosis, transport, procedure, and recovery. That just shows the result of well-coordinated team work.”

About the doctors, Matt says, “They were all great! The nursing staff was exceptional as well. I would love to thank them. Dr. Sundararajan has been great with my follow up care. Dr. Furlan was great in the hospital, very upbeat and reassuring me that I was doing well in my recovery.” Many physicians think the fear of COVID-19 is preventing stroke victims from seeking out emergency care that could save their life and reduce their... 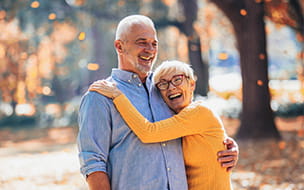