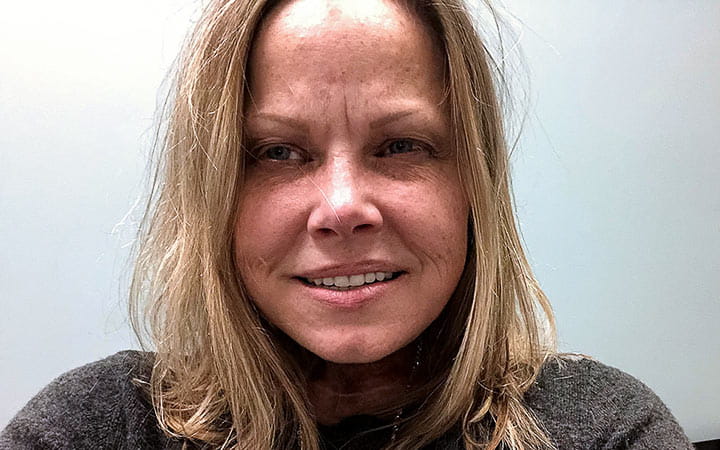 Every day, for nearly half her life, Kerrie Cirino McDowell has felt the after-effects of her treatment for thyroid cancer.

They aren’t subtle: Pain when she moves her neck, difficulty swallowing and speaking because of tightness in her throat. “A lot of stuff got messed up,” says McDowell, who is 48.

Sadly, she was misdiagnosed by a doctor she saw when she was 25, who interpreted the mass on her neck as a swollen gland. One year later, a specialist diagnosed her as having stage 3 thyroid cancer. At that point, it meant removal of her thyroid and thymus gland, chemotherapy, swallowing radioactive iodine and having radiation beamed at her neck externally. And multiple surgeries over the years followed.

All of it helped save her life, but it also meant ongoing physical struggles because of scar tissue and the effect of radiation on the bones in her neck.

Then she heard – from a UH pain management physician and a UH ENT specialist – that the UH Connor Integrative Health Network offered care that could address her ongoing issues. UH Connor’s therapies are a complement to a patient’s standard medical treatment by UH physicians, which is why the word “integrative” is emphasized. All of it is under the umbrella of one health care system, which means our caregivers are aware of all treatments that a patient is having.

Kerrie was ready to try. It meant driving once a week from her home in Medina to the UH Landerbrook Health Center in Mayfield Heights, but she says she didn’t mind.

It was a little more than two years ago that Kerrie got an integrative medicine consultation at UH Connor, and since then, she’s been treated under the guidance of David A. Vincent, DC, Medical Director of Chiropractic and Massage Therapy at UH Connor.

“I’ve had chiropractic manipulation, myofascial release, massage therapy and trigger point therapy,” McDowell says. “By three months in, I started to feel better, and I was able to swallow food better. I used to have to drink a lot of fluids just to do that.”

She adds, “Talking is easier, and I can move my neck with so much less pain. And I sleep much better.”

She used to have a throat expansion treatment by her gastroenterologist – by means of an endoscope inserted in her throat – every three months, and now only needs to have that procedure once a year.

Dr. Vincent has seen the improvements too.

“She’s found this therapy very helpful for reducing her symptoms,” he says. “As a result, she is able to live a highly functional life, without pain medication.

“And her overall neck mobility has improved dramatically over the past two years.”

Kerrie says she is extremely grateful at how her conditions have improved, and she continues her treatment. It allows her to do what has become a mission for her.

“I am so glad I found Dr. Vincent and Tammy McConaughey (a massage therapist at UH Connor), as I am now able to live my life in helping foster children,” she says. “I show them love, giving them my time and a home to call their own, until they are reunited with their own families.” A Return to the Cornerstones of Health

Eight-year-old Cooper had trouble channeling his boundless energy and strong emotions. A positive change came about following a consult with a...