Hockey captain skates back to strength after knee injury

The Lake Erie Monsters team captain knew the eerily familiar feeling when he slammed into the boards and his knee buckled in the battle over the puck.

Exactly one year earlier, Bryan Lerg’s other knee became a casualty of the contact sport that has been his life’s passion. This January, the left winger ruptured the anterior cruciate ligament (ACL) at a game in Chicago. The same surgeon – affiliated with University Hospitals Parma Medical Center, the team’s Official Hospital – took care of the player, whom he knows from covering games regularly at Quicken Loans Arena.

With a professional athlete, at the pace with which they play and the stress they put on their joints, we know they’re going to push the repair and the healing result to the limits

In the three years under UH Parma Medical Center’s care, the surgeons at the Center of Orthopedic Surgery have performed surgery on Monsters players’ knees, shoulders and hands. Jared Levin, MD, did an anatomic ACL reconstruction on Lerg, which allows the athlete’s ligament to function most like the original anatomy, with the most natural anterior, posterior and rotational control. Over time, Dr. Levin expects this will give Lerg the best advantage for full range of motion in the joint – and the strongest return to high-demand sports.

While the injury ended Lerg’s season, the leading scorer prior to surgery isn’t taking it easy. He works daily with the team’s trainer, Brent Woodside, to rehabilitate his knee and keep his other muscles conditioned for the rigors of American Hockey League action – and a crack at his ultimate career goal: a chance to play in the National Hockey League. The Lake Erie Monsters are an affiliate of the NHL’s Colorado Avalanche.

When the NHL calls, Lerg will be ready.

“They know when to push on me and when to back off,” Lerg said of his trainer and surgeon. “I’ll rehab all summer, and eventually I’ll be back to full strength.”

“Through our partnership with University Hospitals Parma Medical Center, we see they continue to be industry leaders and experts in terms of quality, personalized service and overall care they provide for our team,” Ostrowski said. “They also share the same values that we do – excellence, innovation, teamwork, quality, diversity and experience. Together, we make a great team and look forward to a great future with them.” 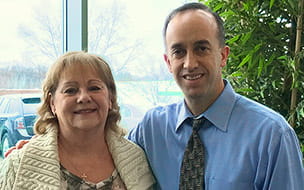 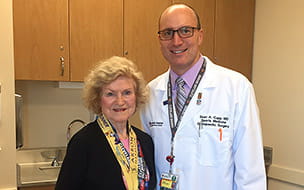 When knee pain threatened to interfere with Agnes Smith’s love of competitive running, she turned to sports medicine expert Sean Cupp, MD for...