Should Your Child Have a Tonsillectomy?

If your child has frequent throat infections or sleep difficulties, you may be wondering whether your child's tonsils may need to come out -- a procedure called a tonsillectomy.

Tonsils are the tissues that sit in the back of the throat. Part of your immune system, the tonsils' purpose is to filter out viruses, bacteria and allergens, says pediatric otolaryngologist Jay Shah, MD.

More than 530,000 tonsillectomies are performed annually on children under age 15, making it one of the most common surgical procedures in the United States.

But how can a parent know when -- or whether -- it's time for tonsils to come out?

“The most common reason we take tonsils out is because of sleep disturbances due to obstruction from the tonsils and adenoids,” he says.

The three signs that may indicate your child’s tonsils are causing sleep difficulty are:

A sleep study may be conducted to diagnose sleep apnea if there is uncertainty about the diagnosis of obstructive sleep apnea or if your child has other medical indications for a sleep study, Dr. Shah says.

Another indication to get a child’s tonsils removed is recurrent strep throat, Dr. Shah says.

"Specifically, it would need to occur seven times in one year, five times over two years or three times over three years," he says.

Children who don't have this frequency of infections will outgrow throat infections, he says.

One reason not to have your child's tonsils removed is a bout or two of tonsillitis, which is when the tonsils become inflamed and infected by a bacteria or virus.

"Your child may have a sore throat, fever, painful swallowing and decreased appetite,” he says. “The back of the throat will be very red.”

Tonsillitis is common among kids in the pre-school to teenage years, but it doesn’t warrant the removal of the tonsils unless it’s a recurrent issue, Dr. Shah says.

If the infection is bacterial, such as strep throat, your child will have more severe symptoms, Dr. Shah says.

Signs of a bacterial infection include persistent high fevers of greater than 102 degrees, and no improvement after three to four days. Large, tender lymph nodes in the neck and white patches on the tonsils can also be signs of strep throat.

"If you are uncertain if the tonsillitis is bacterial or viral, you can visit a doctor for a throat swab or culture,” Dr. Shah says.

When It's Time for a Tonsillectomy

If your child does have their tonsils removed, it’s a quick procedure lasting about 30 minutes with a one- to two-week recovery time.

“The child’s throat will be sore for at least a week,” Dr. Shah says. “It’s good to have popsicles and soft foods on hand. Avoid anything sharp as it can scratch the back of the throat and lead to bleeding.”

In addition to taking precautions against sharp foods, your child will need to take it easy for about two weeks. While most kids return to school or daycare in a week, you should limit their activity for two weeks until they're fully recovered.

Routine dental care – visiting a pediatric dentist for a cleaning and exam every six months – is key to a lifetime of good oral health. The pediatric dentists at the UH Rainbow Dental Center can spot warning signs of problems before they become emergencies, preventing painful and expensive dental problems from developing. Learn more about the UH Rainbow Dental Center. You know it's important to take your kids to well-child visits to keep them updated on immunizations, but those are far from the only benefits.... 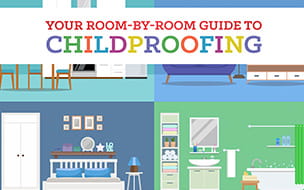 Your Room-By-Room Guide to Childproofing Your Home

With potential dangers lurking around every corner, childproofing your home can be a challenge. This guide is a good start to keep your little ones...