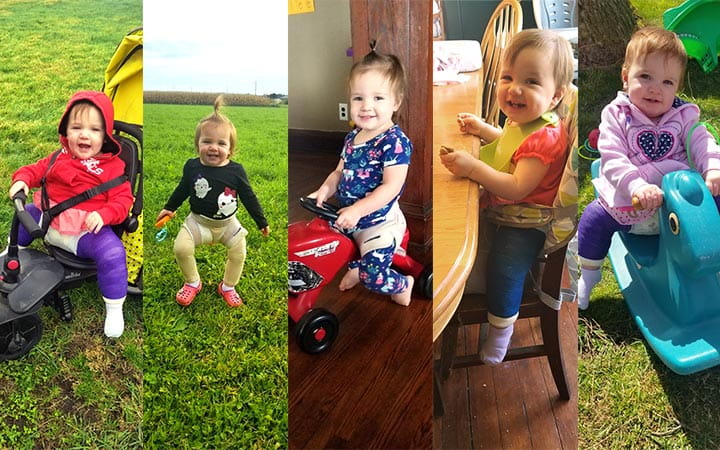 When Sawyer started to walk, her mother noticed a slight limp in her step. An X-ray revealed Sawyer had developmental dysplasia of the hip, a condition in which the femoral head or ball part of the hip joint is partially or completely, out of the socket. If the condition is not fixed, the hip joint will not grow properly, and could lead to pain and arthritis at a young age.

UH Rainbow pediatric orthopedic surgeon Allison Gilmore, MD, performed a closed manipulation procedure and application of a spica cast to put Sawyer’s hip back in place and keep it there.

When Heidi first saw her daughter’s spica cast, she was overwhelmed. “I was about to give birth to our third child, and I kept thinking how are we going to do this? We knew it would be hard, but we weren’t sure how hard until we were living it,” says Heidi.

At the beginning, Sawyer wasn’t a big fan of her cast – after all, she suddenly wasn’t able to do the things she had just learned how to do. Heidi and her husband were determined to help their daughter gain back some independence. They found a travel chair that allowed her to sit at the kitchen table to enjoy meals together as a family. They adapted a tricycle with a harness strap so they could push Sawyer around the house and outdoors. Within a few days, Heidi noticed her daughter’s spirit start to shine.

The spica cast is critical to the correction of developmental dysplasia of the hip. According to Sawyer’s nurse practitioner Michelle Calabretta, families often are overwhelmed by the adjustment the cast causes to day-to-day life. The care team at UH Rainbow guides families through the lengthy process, as the child typically needs to be in a cast for two to four months, or long enough to remodel the hip socket for the femoral head to fit in it anatomically.

“Our team provides tips and tricks for parents and offers constant support throughout the recovery process. Heidi was super inventive and creative in how she adapted situations for Sawyer. We’ve been able to share Sawyer’s experience to help other families starting the spica cast journey,” Michelle says.

Sawyer is thriving! Currently out of her cast and in her fifth month of wearing a removable rhino brace, Heidi is hopeful she will get the all clear from the pediatric orthopedic team early next year. “There’s no stopping our little girl! We are so thankful for the doctors, nurses, and therapists who played a part in Sawyer’s hip dysplasia journey,” Heidi says.

Developmental dysplasia of the hip is relatively common, occurring once in every 1,000 births. It is more common in girls than boys. Early diagnosis and treatment is key. 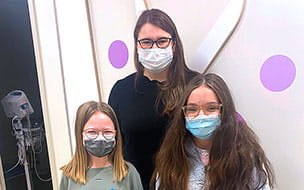 A UH Rainbow nephrologist asked a young kidney transplant if she would consider connecting with Lily, share her experience and be a mentor. Jordan Nudelman was 14 when she developed severe stomach cramps and lost her appetite. The problem was constant. And because the high school...