A new proposed approach to the staging of heart failure has the potential to improve public knowledge of the condition and to encourage patients to be treated in its earlier stages, when guideline-directed therapy can have the most benefit.

The details of the proposed new approach to staging of heart failure:

“For example, with stage B, it doesn’t just look at how the heart beats, whether it’s stiff or weak,” he says. “It also adds in additional things that can point towards the heart not being normal.

“Before, we would just choose an echocardiogram or an MRI to determine whether something’s wrong with the way the heart’s beating. This new approach adds other tests, including biomarkers or heart catheterization data, showing that the patient has more fluid than they need to have, even though the patient may be asymptomatic. The lack of symptoms remains, but the definition of what is an abnormal heart is expanded.”

Heart Failure as a Preventable Condition

The emergence of at-risk and pre-HF categories, similar to pre-cancer or pre-diabetes, may also lead the general public to consider heart failure as more of a preventable condition or one more effectively managed through early detection, Dr. Ramani says.

“I think that’s a great analogy,” he says. “With a pre-heart failure situation, in the majority of cases, the risk factors are modifiable through good clinical follow-up and appropriate medical therapy.”

For other patients, the new proposed staging system will allow heart failure specialists to keep patients in the lowest stage as long as possible, he says, helping to prevent progression from stage B to stage C, or sometimes even reversing from stage D to stage C.

“Often times, we get patients referred when they’re in extremis,” he says. “They’re really, really sick. However, with good medical therapy, a lot of the comorbid conditions, particularly things like frailty and renal dysfunction are often reversible. If we can catch the patient early on, we can deal with their complex medical issues, make the appropriate referrals and get them what they need.”

Being an active partner in the care and management of your heart failure empowers you to improve your symptoms and positively affect your long-term health. The heart failure team at UH Harrington Heart & Vascular Institute works with each patient to minimize symptoms, slow or stop the progression of underlying disease, reduce the need for hospitalization, and help live a longer, healthier life. Learn more about heart failure care at UH Harrington Heart & Vascular Institute. What a Preventive Cardiologist Can Do For You

A preventive cardiologist practices a subspecialty of medicine that is focused on lowering patients’ risk for developing heart disease and having a... 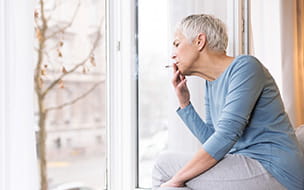 How You Could Be at Higher Risk for COVID-19

Wondering whether you could be at heightened risk for COVID-19? Check if or how many of these characteristics apply to you.