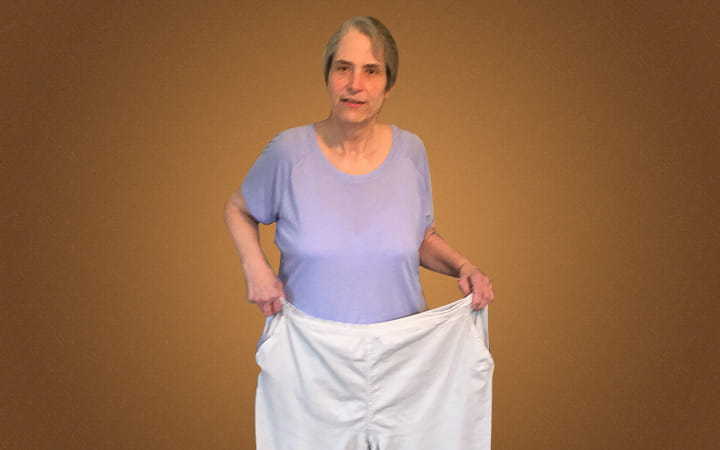 Jean H. of Mentor has a long history of orthopedic problems that began when she was 10 years old. Born with a congenital defect in both knees, over the course of her adult life she has had two knee replacement surgeries, back surgery and, most recently, hip replacement surgery – which proved to be her biggest challenge. Jean’s body mass index (BMI) was too high for the procedure to be safe and she was told she needed to lose at least 125 pounds before her doctor would move ahead with hip replacement surgery.

“My hip pain was probably my biggest incentive to lose the weight,” Jean says. “I had to use a wheelchair at work and I couldn’t sleep, lie down or even sit without pain.”

Jean also was concerned about her health in general – she already had sleep apnea and knew the excess weight was putting a strain on her heart. “But until recently, I just wasn’t ready to change my eating habits,” she says.

Up until age 3, Jean was a petite child – in fact, family members called her Teeny Jean. After her third birthday she began to gain weight.

“I don’t really remember eating a lot,” she says. “But I do know we often had pizza or spaghetti for dinner. And once I was a teenager, with a driver’s license, I could get anything I wanted – I just ate way too much of the wrong types of food.”

Jean says she didn’t feel fat as a child. “I was always out there with the boys playing sports, being active – a real tomboy. And as a teenager, I played high school volleyball,” she says. However, Jean’s active lifestyle combined with her knee problems resulted in frequent injuries.

“When I got married and became pregnant, I knew I couldn’t risk hurting myself. My husband was a long haul truck driver and I needed to stay well to take care of the baby,” she says. “So I limited my activities and then I really began to put on weight. For me, eating was a coping mechanism – I ate to deal with frustration and stress. And when my daughter unexpectedly passed away at age 25, I ate to deal with my grief.”

Over the years Jean tried every diet out there but nothing seemed to work. Eventually her hip pain got so severe that she had to take a leave of absence from work.

On the recommendation of her niece, who had undergone gastric bypass surgery at University Hospitals, Jean consulted with bariatric surgeon Leena Khaitan, MD.

“I was ready to go ahead and get the surgery right away, but Dr. Khaitan explained there was a lot of work to be done before the procedure could be scheduled, including attending medically supervised weight loss classes, a psychological assessment and insurance clearances.” she says.

Finally, almost one year later, all the pre-surgery requirements had been met and Jean underwent gastric sleeve surgery at UH Geauga Medical Center, a campus of UH Regional Hospitals in February 2020.

“I was very happy with Dr. Khaitan and the nurses who cared for me were all very nice and helpful,” Jean says. “I was only in the hospital for two, maybe three days. And there was very little pain. I filled my prescriptions for pain medications when I went home, but never finished them.”

Once home, Jean and her husband changed their ways.

“We shop together now and the sweet stuff isn’t in the house anymore,” she says. “All my cravings disappeared after the surgery and my husband is diabetic, so it is a good thing for both of us, although we do allow ourselves the occasional treat. The pandemic also helped because all the restaurants were closed and I had to start cooking for myself – even though I don’t like cooking and never have. Now I cook big batches of healthy food and divide it into portions so I’m not tempted to overeat. It became a personal challenge – losing the weight was my job now.”

After just nine months, Jean had lost enough weight to be approved for the hip replacement surgery she needed so much. Performed by UH orthopedic surgeon Steven Fitzgerald, MD, Jean’s hip replacement surgery was also a success. “I was only in the hospital for one night and my physical therapist had me up and out of bed right after the surgery,” she says.

Jean, now 65, has now lost more than 170 lbs. and is just 15 pounds away from her target weight. “It’s harder to lose it now but I’m determined,” she says. “I went shopping just last month to buy all new clothes. Up until then I was just wearing the old baggy stuff but I decided it was time to reward myself.”

Now retired, Jean makes time every week for exercise. “I go to the Y several times a week to use the indoor track. I can now walk a mile nonstop with the use of two canes. I still need the canes because of the strength deficit between my hips. Until that is corrected, I walk like a penguin,” she quips. She can also ride the recumbent exercise bike for three to four miles without stopping and takes a Silver Sneakers exercise class twice a week.

“It still surprises me that I’ve made so much progress,” she says. “And right now the only food in the fridge is chicken and spaghetti, so it’s time to get cooking.” 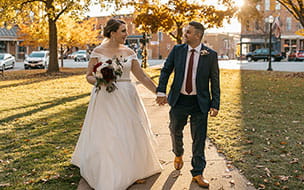 Ailene Zaebst walked down the aisle at her wedding more than 140 pounds lighter from bariatric surgery, completing a weight-loss journey that began... 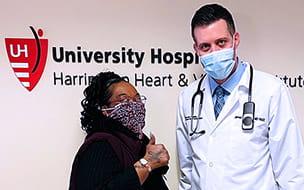 Katrina Cox of Bedford is now a healthier and more active mother and grandmother, thanks to a whole-health approach for care at University Hospitals.