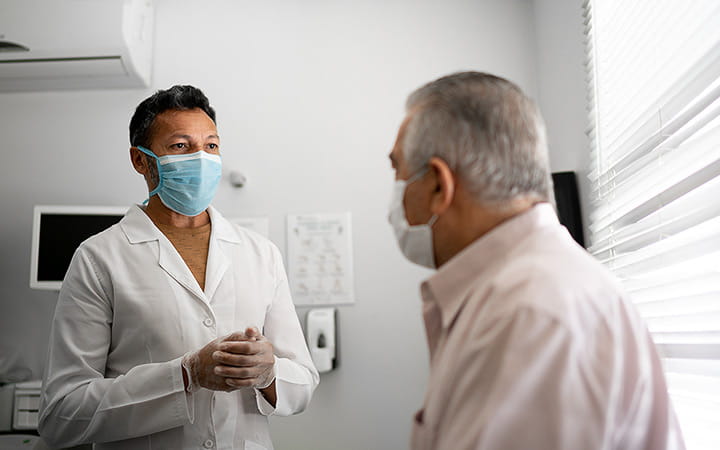 Mike Guzi Jr., 90, is a retired employee of the Office of Small Business Programs – Department of Defense. An avid traveler in his younger days, Mike spent many wonderful years with his wife – deceased as of last year – traveling around the country in their RV. Nowadays, Mike enjoys spending time with his family, friends and neighbors.

Mike was diagnosed with an enlarged prostate gland, a condition medically known as benign prostatic hyperplasia (BPH). Quite common as men grow older, the condition often causes uncomfortable urinary symptoms as a result of the blocked flow of urine from the bladder. In addition, when a man with BPH is unable to completely void his bladder, bacteria can grow in the stagnant urine. As a result, the condition can cause UTIs, which happened in Mike’s case, unfortunately.

Mike initially had another procedure that was only partially effective in relieving his BPH symptoms.

Next, Dr. Jaeger recommended Mike have a GreenLight laser prostatectomy, a laser treatment that removes prostate tissue. During this minimally invasive, highly effective procedure, the patient is put under anesthesia, and a telescope containing a laser fiber is inserted into the urethra to the level of the prostate. The doctor uses the laser to rapidly but gently vaporize the excess prostate tissue responsible for limiting the flow of urine.

“Dr. Jaeger has great people skills,” Mike says. “I always felt better whenever I left an appointment at her office. From my pre-op appointments to the procedure itself, everyone involved – including the nurses and the anesthesiologist – was very professional. The entire team made me feel comfortable and confident about the care I was getting.”

Mike had his GreenLight laser treatment in June 2020. “During my follow-up appointment with Dr. Jaeger, tests confirmed that my urinary flow had greatly improved, which I already knew because I felt better immediately after the surgery. At the end of the follow-up, Dr. Jaeger told me she wouldn’t need to see me again for another year, not unless any symptoms came back.”

Nine months after his GreenLight laser treatment, Mike remains free of BPH symptoms. Best of all, Mike hasn’t had a UTI since before the procedure.

“If your doctor recommends it, I’d encourage anyone with BPH to have this procedure,” he says. “And if you can get it done at UH, by all means do so. I can’t speak more highly of the doctors and staff at UH Urology Institute. Is Your Family Complete? Why You Might Consider a Vasectomy

Many couples will reach a point where they decide not to have more children or not to have children in the first place. For men, an increasingly... How Having COVID-19 May Affect Men's Sexual Health

Most of us are familiar with the common symptoms of COVID-19: fever, shortness of breath, fatigue and loss of smell or taste. But some research has...