Finding the First Relief From Nerve Pain in 17 Years 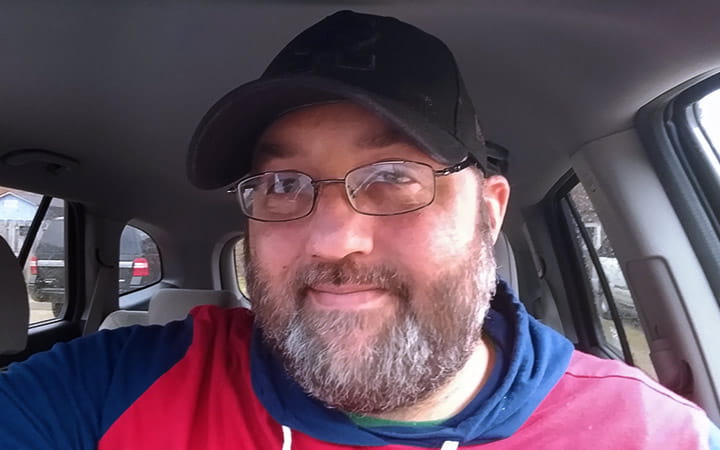 Think back 17 years. Perhaps you were in high school or college, or in the early part of your career.

Now imagine that for all those years, you were dealing with extreme and chronic pain in your back. That’s a long time to suffer, but that has been Bill Elliott’s life. The 41-year-old Brook Park man has dealt with back and nerve pain that originated with a landscaping accident when he was 24, and was aggravated by a car accident and a fall and other injuries over the years.

He’s had five surgeries total in the past seven years, including two bone fusions. The surgery and a few dozen steroid injections over the years helped some, but ultimately gave him no long–term relief. Nor did opioids, though it was all too easy to become physically dependent on them.

“I detoxed off those, and didn’t ever want to take them again,” Bill says.

Having been athletic – he was a linebacker on the Brunswick High School football team – he could not have imagined a future with such immobility. He spent last summer, for example, in his second–floor bedroom, because it was excruciating and nearly impossible to take the stairs. He couldn’t stand for more than 10 minutes at a time, or lift anything. He was sure that eventually he’d be in a wheelchair.

Not surprisingly, the incapacitation also led to depression.

Then, a physician he saw referred him to Kutaiba Tabbaa, MD, a pain management expert at the Comprehensive Pain Center at UH Parma Medical Center.

For Bill, that was when everything changed, due to a new treatment that hasn’t even been covered by insurance for all that long. It’s an opioid–sparing infusion therapy that includes ketamine – the component that helps control neuropathic and central pain.

It gave him the first relief from nerve pain that he had experienced.

As Dr. Tabbaa explains, ketamine has been used for many years as an anesthetic agent in hospital settings. In the late 1980s to early 1990s chronic pain research showed that ketamine played a significant role in treating chronic pain, working on the NMDA receptors involved in central and neuropathic pain. Last year the FDA also approved ketamine for the treatment of depression through nasal spray with in–office monitoring by a psychiatrist.

During the intravenous infusions that Bill receives (every three weeks at this point), the chronic pain is essentially turned off, and chronic nerve pain receptors are reset. “That manages the pain for a longer period of time, after the infusion stops,” says Dr. Taabaa.

The relief lasts, Bill says. “I do still have constant pain at the surgery site and in the lower back but this has worked for the nerve pain, which has been unmanageable.”

He used to work sometimes as a DJ at parties and musical events and longs for those days with friends who loved electronic music as much as he did. He also wants to be able to be active with his 12-year-old sons, and going camping with them again. His wife Brandy died four years ago at 39 after a brief illness that affected her lungs, so his parents moved into his home to help him and the boys.

The IV treatment has made a big difference in his life, and his outlook.

“Each time I’ve gone the pain leaves another part of my body,” says Bill. “First, it left the part of my back where my surgery was. The second time, the pain left my feet and lower body. Before that, the pain would shoot all the way down to my big toe.”

“I’m so grateful to have been referred here,” Bill says.

For Dr. Tabbaa, who is based at the UH Comprehensive Pain Center, the past few decades have been devoted to his search for new ways to provide pain relief. He recalls how lidocaine/Bretylium blocks (Bier blocks) were used in the 1990s, though not with tremendous long-term effects. Ketamine, too, was used then as well by itself in high dose, but it wasn’t until he added a few others medications to the infusion that it knocked out stubborn and excruciating nerve pain. The infusion takes about 30 minutes.

“Nerve pain has always been very hard to treat,” Dr. Tabbaa says. “This resets the central nervous system, and with the pain relief, it allows for movement again that would have been too painful before.

“The infusion gives the patient a window of opportunity to decrease pain, but more importantly to remodel the unused and weak muscles, which eventually creates stability, improves function and decreases the reliance on a chronic pain therapies.”

“The Parma comprehensive pain program team empowers our patients to become the active component of this program and accept the challenge of becoming well.”

More movement is exactly what Bill wants – whether it’s playing catch with his kids, going on walks with them, or dancing to house music, which had always been a huge source of fun for him.

“I may never be pain-free, but this has given me hope that I can stay at a manageable level that allows me to do the things I enjoy.”