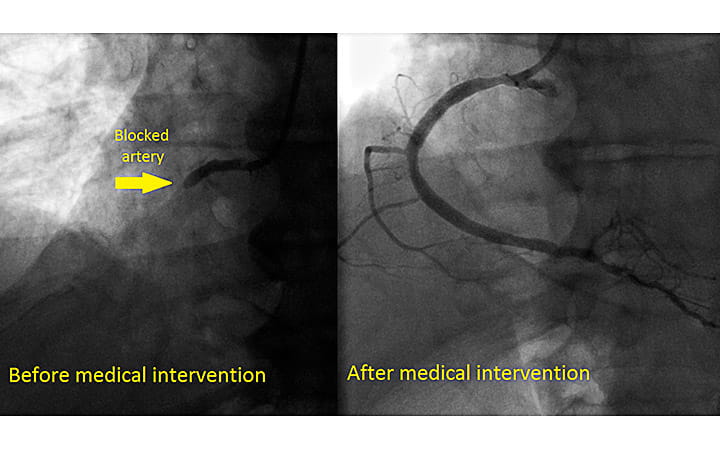 During a heart attack, cardiologists say “time is muscle.” The time between when you arrive at the hospital and when your blockage is opened matters. The American Heart Association recommends a “door-to-balloon time” (D2B) of no more than 90 minutes. University Hospitals Portage Medical Center in Ravenna, Ohio blew that recommendation away earlier this month with a D2B of 6 minutes.

James Bates of Mantua, Ohio was driving for work on Sept. 12 when he began experiencing chest pains. They went on for about an hour before he pulled over in a parking lot and called 911. The call came in as a possible stroke, but when Aurora Fire Department paramedics arrived on scene and did an EKG they realized Bates was experiencing ST-elevation myocardial infarction, or STEMI, a heart attack. The paramedics alerted UH Portage Medical Center and transferred the EKG information directly to the Emergency Department. When the ambulance arrived at 10:36 a.m., UH Harrington Heart & Vascular Institute cardiologist Anjan Gupta, MD, was waiting. The paramedics took Bates directly to the cardiac catheterization lab where Dr. Gupta discovered a 100 percent blockage of Bates’ proximal right coronary artery. The doctor sucked out the clot through mechanical aspiration at 10:42 a.m. and then placed a stent. Relief just 6 minutes after arrival.

“I knew exactly when they released it and opened it up. It was like, wow! I just felt it immediately. It was kind of weird, being aware of it the whole time,” said the 64-year-old who had been experiencing tiredness for three to four weeks prior to his heart attack.

Bates felt as if he could return to work the very next day – a Friday, but waited until Monday. As a construction supervisor, he could avoid taking stairs and lifting heavy loads as his doctor directed.

Close coordination between EMS, the emergency department and cath lab is responsible for Bates’ rapid treatment and quick recovery.

“Everyone knew their individual roles in the team,” said Dr. Gupta. “They communicated with each other very efficiently and produced great results. It was incredible that we could open up Mr. Bates’ blocked arteries within 6 minutes and it was all possible due to great coordination.”

Not only did UH Portage achieve a D2B (or in this case, technically “door-to-reperfusion time”) of 6 minutes, but only 31 minutes passed from the time Aurora Fire Department paramedics arrived on scene to the time Bates’ blockage was opened, which includes about 20 minutes of drive time.

“UH Portage works very closely with the EMS system to coordinate care of STEMI patients,” said Dr. Gupta. “Appropriate medications are given to the patient in the field and on arrival to UH Portage the patient is directly transferred to the cath lab. Our cath lab team is incredibly efficient. It is the overall coordination between the EMS, ER and the cath lab team that leads to great door-to-balloon times.” 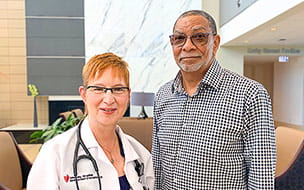 Just three days after being fitted with a LifeVest defibrillator, Glynn Crawford experienced a life-threatening abnormal heart rhythm. The wearable... 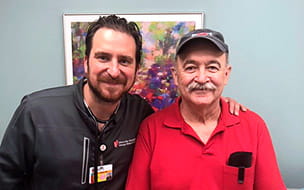 Persistence, determination and medical skill pay off to save the life of a 63-year-old man whose heart attack caused ventricular fibrillation – a...