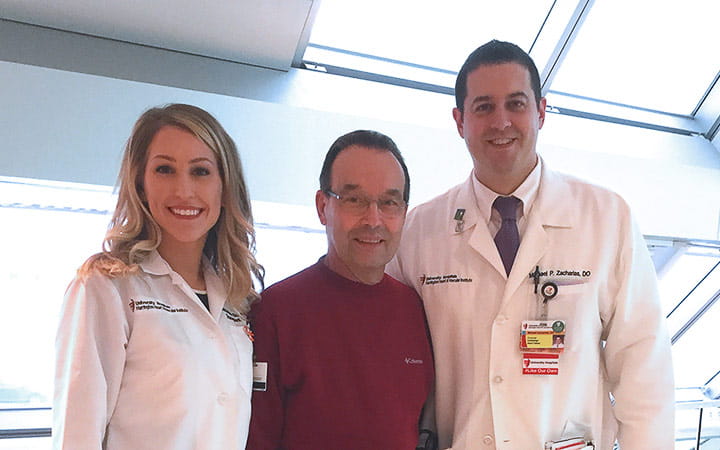 In June, 2016, 68-year-old Larry Sekula’s heart was no longer able to pump the blood his body required. Left with no other options, and in dire need of a heart, his physicians listed him as status 1A on University Hospitals transplant list. Just 19 days later, Larry received his miracle.

Larry’s cardiac issues began in 2006 when he was diagnosed with myocarditis – a virus that attacks the heart, causing heart failure. At that time, he underwent open heart surgery at a hospital in his hometown of Erie, Pennsylvania. Although he retired from General Electric post-surgery, Larry was able to enjoy his retirement, spending time with family and golfing whenever possible.

With time, Larry’s heart began to show signs of failure. In November 2015, he had a pacemaker and defibrillator implanted to help his heart maintain a normal rhythm.

Then, in April 2016, a diagnosis of ischemic cardiomyopathy took him back to the hospital. His heart had weakened to the point that it could no longer pump an adequate amount of blood on its own. A left ventricular assist device (LVAD) was placed in his left ventricle – the main pumping chamber of the heart – to keep him alive. But, it was clear that Larry needed a new heart.

“Dad, you’re headed for a transplant,” said Debra Carlson, RN, Larry’s daughter and a registered nurse at University Hospitals Geneva Medical Center. A cardiac nurse for more than 20 years, Debra knew what her dad was facing.

In the hospital for more than a month after receiving the LVAD, Larry recovered with Debra and her husband in their Perry, Ohio home. One day, Debra noticed one side of her father’s face drooping and he was rushed to the emergency department at UH Geneva Medical Center. He was experiencing mini-strokes due to blood clots forming near his heart. Larry was stabilized and transported via helicopter to University Hospitals Cleveland Medical Center and placed in the Neurological Intensive Care Unit.

“I felt very comfortable at UH,” said Larry. “I felt comfortable with my doctors, nurses and with my surroundings.”

Michael Zacharias, DO, a cardiologist with UH Harrington Heart & Vascular Institute who specializes in heart failure, was one of Larry’s primary physicians during his stay at UH Cleveland Medical Center.

“Dr. Zacharias approached me and asked if I would entrust UH with my heart transplant,” said Larry. “Without hesitation, I said yes.”

The condition of Larry’s heart, coupled with his extreme risk for a life-threatening stroke, warranted the hospital’s highest status for transplant. At that point, all he could do was wait.

“The staff in Tower 5 at UH Cleveland Medical Center made the time I spent there wonderful,” Larry said. “I got to know people there and see how caring they truly are. Not only did they lift my spirits, but I saw how they raised each other’s spirits as well.”

On June 26, 2016, Larry received what he calls a miracle. An organ donor had given him the most precious gift – a heart and a new chance for life.

The 12-hour surgery was performed by a team of cardiac and transplant surgeons at UH Harrington Heart & Vascular Institute and the outcome has been astonishing, Larry was discharged on July 8 to his daughter’s home to recover. Within two months, he was back on the links, golfing with friends.

“Seeing him today, you’d never know he went through such a struggle with his health,” says the Heart and Lung Transplant Coordinator at UH. “He has even come back to UH to talk with a patient who has been waiting for a new heart. Seeing Larry’s remarkable recovery has renewed the patient’s hope.”

“My biopsies, echocardiograms and blood work were all done at the Cleveland VA,” said Larry. “As a veteran, I’m grateful that this resource is available to all those who served. I appreciated the ease with which the two organizations collaborated to get me where I am today.”

Looking back, Larry is grateful to everyone that has been involved in his care. Along with the compassionate people he encountered, he also credits his own inner strength to carry him through. When asked what he would say to others facing serious health issues he said “Stay strong, believe in yourself, and place your trust in UH.”