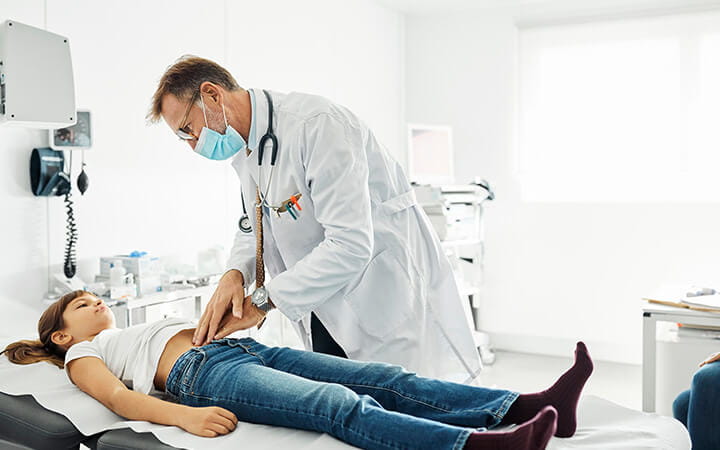 Doctors are trying to zero in on the cause of an unusual spike of severe hepatitis cases in children in the United States and Europe.

The infections causing hepatitis – inflammation of the liver – are still extremely rare. More than 200 cases have been detected worldwide, including a handful of recent cases in Ohio as well as 9 other states.

What Is Causing Hepatitis in Children?

“We believe some sort of virus is causing these illnesses. The most likely culprit is a virus known as an adenovirus,” Dr. Edwards says.

Adenoviruses are common and there are more than 50 types. Most often, they cause cold symptoms such as sore throat and coughing or gastrointestinal distress that passes in a week or two.

The subtype associated with the current acute hepatitis outbreak in children is called adenovirus subtype 41 and cases have been found mostly in children under age 5. Some of the children have needed liver transplants.

“We’ve never seen a strain like this before that attacks the liver with such ferocity,” Dr. Edwards says.

What Are the Symptoms of Hepatitis in Children?

Adenoviruses spread easily, most often through respiratory droplets when people talk, sneeze or cough. The virus also may spread from fecal contamination and can live on surfaces.

Parents should be aware of the symptoms of hepatitis in children. Early symptoms include:

Dr. Edwards says precautions are the same as for other viruses: Wash hands with soap and water (alcohol-based hand sanitizers are not very effective against adenoviruses). Avoid touching eyes, nose or mouth with unwashed hands and avoid close contact with people who are coughing or sneezing.

Is There a Link Between Pediatric Hepatitis and COVID-19?

Dr. Edwards says the cases may indicate that young, otherwise healthy children are susceptible to a virulent strain of adenovirus.

“Most of us have had adenoviruses in our lives. It’s usually not a big deal. You just have a viral illness and you get better in a couple days,” she says.

“But kids under 5 haven’t had it. If a severe strain comes around, they have no immunity from previous, mild adenovirus infections. I assume that’s what we’re seeing, but it will take more research before we know that is what’s happening.”

Dr. Edwards adds that rumors that the hepatitis cases are linked to COVID-19 or the COVID-19 vaccine are false. The CDC found no link between COVID-19 and confirmed cases in Alabama, where the first U.S. cases were found.

Misinformation linking the hepatitis cases to the vaccine has spread on social media.

“The vast majority of children with liver failure are under 5, and the vaccine hasn’t been approved for them,” Dr. Edwards says.

“We don’t think COVID-19 or the vaccine are involved in any way, shape or form.”

UH Rainbow Babies & Children’s has the region’s largest coordinated network of pediatric care providers, committed to delivering the very best care to children of all ages. Find out more about our pediatric practices and find a provider near you. Why Do Children Tend to Fight off COVID-19 Better Than Adults?

Though kids can get COVID-19 just as easily as adults, most infected children experience mild symptoms or no symptoms at all. Why is this? COVID-19 Booster for Kids Under 12: What Parents Need to Know