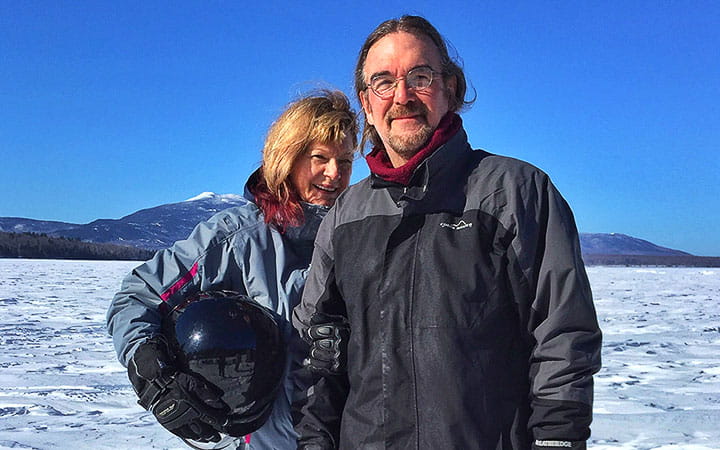 Exploring rocky, remote elevations fills Alan Studt’s leisure time. So luck was on his side when – just weeks before he was found to have four significant blockages in his coronary arteries through a coronary artery calcium score (CACS) test – the guitarist and graphic designer enjoyed a vacation climbing in the mountains of Idaho with his girlfriend.

The diagnostic cardiac test performed after Alan’s return home gave the Parma man a more sobering and immediate goal: to undergo further cardiac evaluation and, if needed, a stent replacement or bypass surgery before a serious heart attack struck.

“At first I wanted whatever was the best test to look at my heart,” says Alan, 62, who opted for a calcium score because the noninvasive test is offered free at all University Hospitals radiology locations. “Then my goal was to get a bypass before something happened.”

Far from a perfect score

A calcium score is a low-dose CT scan of the heart that shows calcified plaque in the coronary arteries, an indicator for atherosclerosis. The test is a useful and recommended tool for predicting future risk of heart attack. Zero is a perfect score. Under 399 means some hardening of the arteries is present. A calcium score over 400 reflects significant heart disease and an elevated risk of a heart attack.

Alan’s calcium score was a whopping 1638. Considering his older sister had a heart attack and his brother had a heart procedure around the same age at which he was diagnosed, Alan wasn’t completely surprised. He knew he could not waste any time and pursued an appointment with a cardiologist at UH Parma Medical Center.

“Any patients with a coronary artery calcium score over zero deserves to be evaluated by a cardiologist for optimal risk assessment, risk factor modification and further cardiac testing as needed,” says Farshad Forouzandeh, MD, PhD, who performed an coronary catheterization on Alan through his wrist, a procedure that only took 10 minutes.

“As opposed to the old days, when the cardiologist performed the catheterization through the groin, requiring the patient to lie flat for four hours after the procedure, we now do 90 percent of our heart catheterizations through the right wrist, which makes it much simpler and safer. Our patients can sit right up after the procedure and generally go home the same day even if stent placement is needed.”

In Alan’s heart arteries, Dr. Forouzandeh found four blockages that were 70 percent to 95 percent occluded, including the left anterior descending artery, known as the widowmaker because a blockage to this major vessel can trigger sudden death. Alan was scheduled for a quadruple coronary bypass surgery the next day.

“Everyone says they can’t believe he had open heart. I guess it’s because he was in good shape and his heart was strong from the start.”

As a nurse who spent many years of her career rehabilitating cardiac patients who had undergone coronary bypass surgery or other cardiac events, Gale has been particularly impressed with Alan’s care in UH Parma’s Heart Center. She even noted that the UH cardiac surgeon used a wound vacuum with Alan’s incision, resulting in the thinnest, cleanest scar she has ever seen.

“When my family goes into the hospital, I am very observant and not shy about speaking up,” Gale says. “I could not find one issue with the Heart Center, nurses or doctors. They were all top-notch – just amazing.”

Many insurance companies and health systems don’t cover this test. UH offers it at no cost to the patient. Coronary calcium scoring is recommended for men and women age 45 and older who have never been diagnosed with coronary artery disease but have a history of high blood pressure or cholesterol, type 2 diabetes, smoking or a family history of heart disease.

Alan’s only previously known warning signs were moderately high cholesterol of 250 and high blood pressure. While he has consistently taken medication for hypertension for about 15 years, he stopped taking his cholesterol-lowering statin due to side effects.

Never again will Alan stop taking a medication without consulting his physician.

“We are fortunate to have new classes of medications beside statins that can lower LDL with little or no major side effects,” says Dr. Forouzandeh. “Also, there are ways to improve statin tolerance. Cardiologists can help with these.”

Alan, for his part, intends to continue following up regularly with his cardiologist.

“I’m living the life,” says the musician, who counts “Here Comes the Sun” among his favorite songs and remains hopeful to once again climb in the mountains next year.