The one-year results from the five-year Chocolate Touch study, published in the journal Circulation and presented as a late-breaking clinical trial at the meeting of the American College of Cardiology in March 2022, show that the second-generation Chocolate Touch device is just as safe as the first-generation Lutonix device, but importantly, is more effective in keeping the treated artery open after one year.

Interventional cardiologist, Mehdi Shishehbor, DO, MPH, PhD, President of UH Harrington Heart & Vascular Institute and holder of the Angela and James Hambrick Chair in Innovation, is the international principal investigator for the Chocolate Touch study and lead author of the Circulation paper. The study includes 34 sites in the United States, Europe, and New Zealand.

"At a minimum, the Chocolate Touch device is as safe as the Lutonix, but with better patency at one year," he says. "We hope the improvement in patency will translate into lower likelihood of needing repeat procedures for our patients." 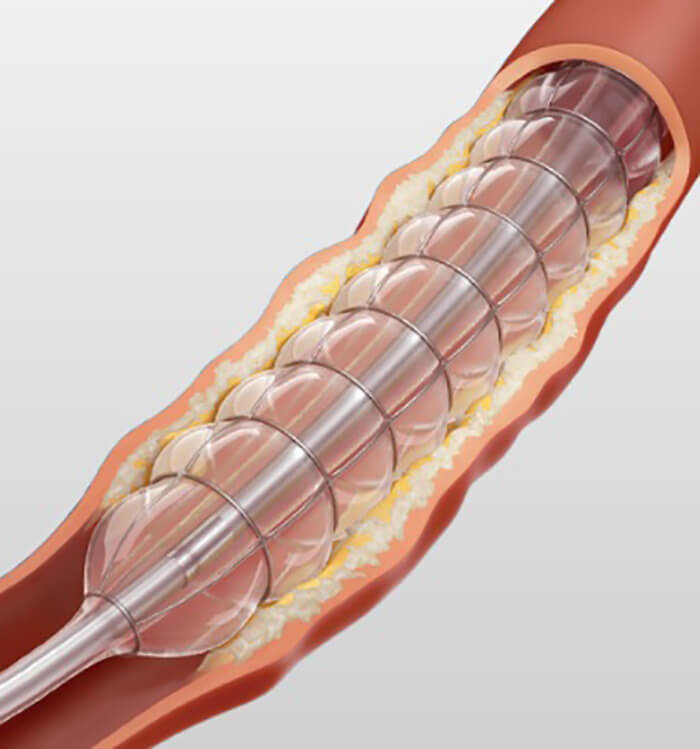 For the study, Dr. Shishehbor and his colleagues around the world enrolled 313 patients who were undergoing percutaneous transluminal angioplasty (PTA) for superficial femoral and popliteal artery disease, randomizing them to receive either the Lutonix device or Chocolate Touch. They then compared outcomes for the two devices in terms of artery patency without the need for additional procedures at 12 months. In addition, the researchers gathered safety data, including major adverse events at 12 months, defined using a composite of mortality related to the affected limb, major amputation and revascularization procedures.

Dr. Shishehbor says he attributes the success of Chocolate Touch to the addition of a nitinol cage in the device’s design.

“The Chocolate Touch device is not just the balloon and the drug, there is a third component, a nitinol cage that constrains the balloon,” he says. “That nitinol cage controls how the balloon is inflated, which minimizes trauma and inflammation to the vessel wall which likely translates into better patency.”

Dr. Shishehbor and his national and international colleagues on the Chocolate Touch study are continuing to collect and analyze data. Results from year two of the study are expected in early 2023.

In the meantime, Dr. Shishehbor says he encourages heart and vascular specialists to take a close look at current study results.

“In this prospective, multicenter, randomized trial, the second-generation Chocolate Touch drug-coated balloon met both non-inferiority end points for efficacy and safety and was more effective than Lutonix at 12 months for the treatment of femoropopliteal disease,” he says. “The trial is very encouraging in that the second-generation device can be more useful and more efficacious in treating patients with PAD.”