Device supported by $4.8 million DOD grant expected to save lives from trauma-induced coagulopathy

When a soldier suffers a traumatic injury on the battlefield or a motorist is involved in a serious crash, the coagulation system in their blood often goes haywire from the injury. This condition, called trauma-induced coagulopathy (TIC), is deadly serious. Compared with people who do not have coagulopathy, those who do have three to four times greater mortality and are up to eight times more likely to die within the first 24 hours following injury. To make matters worse, there’s currently no quick, point-of-care way to diagnose TIC, whether on the battlefield or in the ambulance, making early intervention nearly impossible. 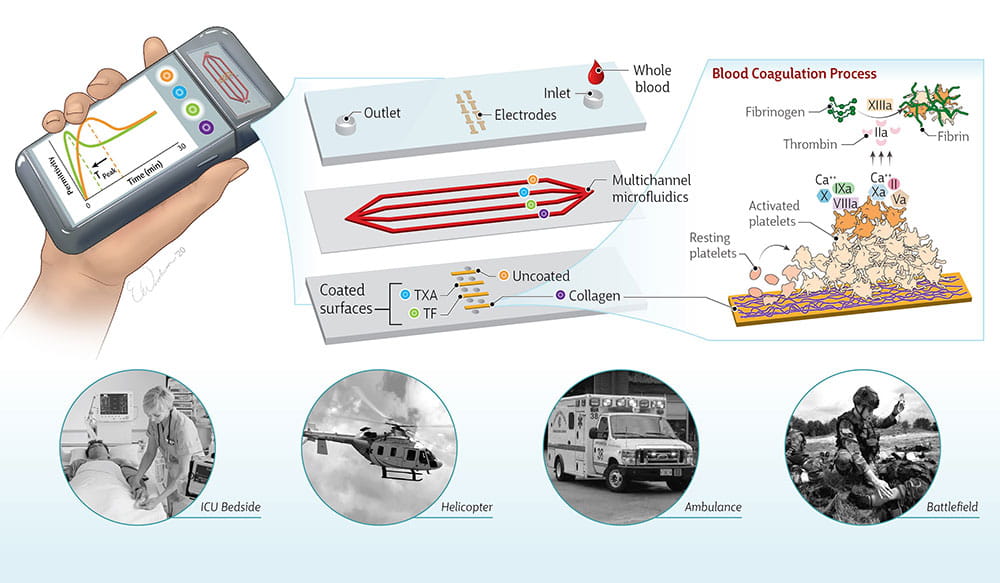 However, a multidisciplinary team from UH Rainbow Babies & Children’s Hospital, Case Western Reserve University and the University of Pittsburgh is well on the way to changing that. They’ve recently received a $4.8 million grant from the U.S. Department of Defense to develop and validate a multichannel, handheld blood coagulation analyzer for early, rapid and comprehensive assessment of TIC.

“TIC is a complex imbalance between bleeding and clotting,” says UH Rainbow hematologist Sanjay Ahuja, MD, Dominic Piunno Endowed Chair in Hemophilia & Bleeding Disorders and one of the investigators on the project. “Unfortunately, there is no good way to measure it, either on the battlefield, in the ambulance or even early on when the patient arrives in the emergency room. So we are trying to close that gap.”

To create the new device, the research team is building on its previous work to develop and validate ClotChip, a point-of-care coagulation analyzer developed by engineers from the Electrical, Computer and Systems Engineering Department at Case Western Reserve University. ClotChip requires just a single drop of blood and delivers results in about 15 minutes. The new device in development, dubbed TraumaChek, requires four drops of blood because it has four different channels for analysis, but Dr. Ahuja says he expects it to generate similarly speedy results.

Work to validate and optimize TraumaChek is well under way at UH Rainbow, Dr. Ahuja says. He’s studying the device in patients with known coagulopathies to test the different channels. Once this work is complete, the device will be testing in real time with trauma patients at the University of Pittsburgh Medical Center.

Given the previous success of ClotChip and the pressing need for a better solution for diagnosing TIC in trauma patients, Dr. Ahuja says he’s optimistic about the prospects for TraumaChek.

“We’re taking a big leap from a complex measurement of trauma-induced coagulopathy and trying to make it a very simple point of care measurement,” he says. “That leap requires this multidisciplinary team to come together. If we can develop a device that identifies TIC on the battlefield or in the ambulance and we are able to save lives, it will really be a game-changer.” 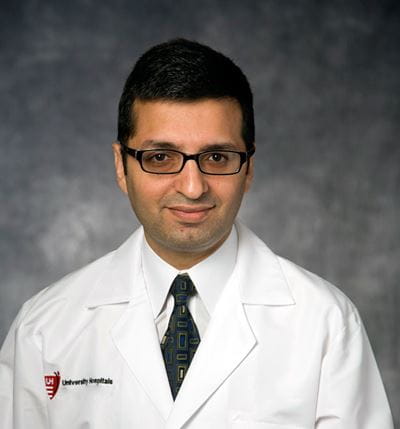