Raymond P. Onders, MD, FACS, Chief of General and Gastrointestinal Surgery, Director of Minimally Invasive Surgery, University Hospitals Cleveland Medical Center; Margaret G. and Walter K. Remen Chair in Surgical Innovation and Professor of Surgery, Case Western Reserve University School of Medicine, is a world-renowned surgeon whose work in diaphragmatic pacing has and continues to impact the practice of medicine and human health across the globe. Dr. Onders, a surgeon at University Hospitals for the past three decades, and his team of researchers developed a diaphragm pacing system (DPS), which improves the functionality of the diaphragm in patients using ventilators. As a result, the number of days patients use ventilators is reduced and allowing patients to breathe on their own again. Over the years, this technology has helped patients suffering from spinal cord injury, severe neurologic disorders, post-surgical patients, and, most recently, in the medical community’s response to COVID-19 and the shortage of ventilators.

A native of Cleveland, Dr. Onders graduated from Kent State University and Northeast Ohio Medical University. While in medical school, he debated between family practice and surgery, but with his United States Air Force obligations, he decided to become a surgeon.  In the early 1980s and his future Air Force career, the thought of space travel intrigued Dr. Onders, “you may only need a surgeon on board since trauma may need hands-on surgical care and other health care needs can be accomplished through video.”

It was around 1997 when Dr. Onders established a mentor relationship with a colleague after having performed an appendectomy on the colleague’s daughter. His colleague had a passion for research, specifically understanding the diaphragm and how to improve the functionality of the diaphragm in patients who have trouble breathing. It was at this time in which Dr. Onders' life changed, and he devoted his academic career to the “great muscle of respiration.”

With a mentor in place and financial and moral support from life-long family friends, Walter and Margaret Remen, Dr. Onders, the Margaret G. and Walter K. Remen Chair in Surgical Innovation, worked with colleagues from the CWRU School of Engineering to study how stimulating electrodes in the muscle can cause the diaphragm to function again. This muscle loses mass faster than any other muscle in the body if not used regularly. The loss of functionality occurs when patients use ventilators for breathing. Dr. Onders and his team discovered implanting electrodes into the muscle near the phrenic nerve, which controls the diaphragm, and stimulating the electrodes with a small battery-powered external pulse generator causes the diaphragm to contract.

The first patient population to test and receive the DPS implants were spinal cord injured (SCI) patients. Most SCI patients require the use of a ventilator to breathe for life, and thus allowing such individuals to once again breathe on their own is truly life-changing. In 2000, Dr. Onders implanted the first DPS in a young quadriplegic man, thereby demonstrating as a proof-of-concept that the technology worked.

Around this time, while trying to obtain FDA approval to test the DPS, Dr. Onders was contacted by the friends and family of actor Christopher Reeves, best known for his leading role in the movie Superman. Reeves had become a quadriplegic after a tragic accident. Dr. Onders implanted the DPS in Christopher Reeves (Superman!) in 2003. Shortly after that, while being interviewed by Katie Couric, a well-known news reporter, she asked whether ALS (amyotrophic lateral sclerosis) patients could benefit from the DPS. As a result, Dr. Onders set out to also obtain FDA approval to use the DP system on ALS patients. The FDA approved the Spinal Cord device in 2008 and subsequently for the ALS patient population in 2011.

Over the last sveral years, Dr. Onders has been working and trying to decrease the length of time many other patients have to use a ventilator.  Every year in the United States, over 100,000 patients have to undergo a tracheostomy for failure to wean off a ventilator. This leads to both significant morbidity, mortality, and cost. The totality of this research led to the derivation of the DPS, TransAreis System (TS), a temporary percutaneous intramuscular diaphragm stimulator intended for patients at risk of or on prolonged mechanical ventilation. The use of TS will alleviate the burden of mechanical ventilation by conditioning the patient’s diaphragm to reduce or avoid the severity of ventilator-induced diaphragm dysfunction. In early 2020, the FDA approved TS for use in high-risk cardiac surgery patients under a study centered at UHCMC. This study has been fast-tracked with the research community at UHCMC and has been able to actively recruit patients to grow our knowledge base in this technology rapidly.

During this time, the medical community began to realize the COVID-19 pandemic was happening. Dr. Onders had previously been working with intensive care researchers in Milan and Madrid, which soon would become COVID-19 hotspots. As we all now appreciate, this pandemic’s most feared complication is severe pneumonia resulting in respiratory failure requiring mechanical ventilation. Given a large number of afflicted patients, a shortage of mechanical ventilators has become a reality in many parts of our nation and globe. Recognizing the need to free up ventilators, ICU beds, and clinical staff resources during the COVID-19 pandemic, Dr. Onders promptly applied for immediate FDA authorization to use the new TS device on any patients at risk for prolonged mechanical ventilation including patients with COVID-19. Working closely with the FDA and Synapse Biomedical  University Hospitals helped found this manufacturer of the technology, on April 13th, 2020, Dr. Onders received the FDA Emergency Use Authorization. That night the first patient implanted in the US occurred at University Hospitals Cleveland Medical Center.

In a short period, a series of patients have benefited from the diaphragm pacing technology. One patient was transferred to UHCMC on April 11th from Columbus after a month of having a tracheostomy with a mechanical ventilator because of failure to wean. He could not be sent home on a ventilator because of the lack of ventilators do to the COVID-19 pandemic. Forty-eight hours after being implanted with the diaphragm pacing technology at UHCMC, the tracheostomy was removed, and the patient was free from the ventilator. He could now plan on going home.

During these difficult times, innovations need to be accelerated. When asked, What did you learn most from working with surgeons worldwide and teaching them how to perform the diaphragm pacing operation?, Dr. Onders replied, "It is the collaboration of researchers around the world sharing their knowledge that helps patients not only in Cleveland but worldwide." 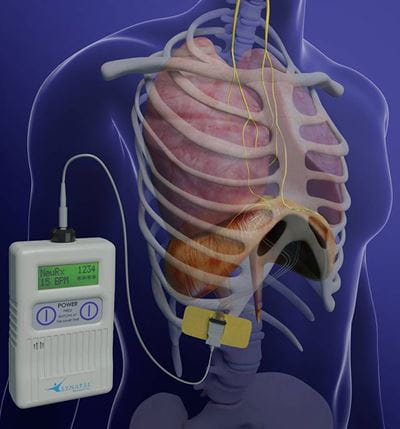