Department of Marketing and Communications

Cleveland, Ohio – Mukesh K. Jain, MD, University Hospitals Chief Scientific Officer, has been elected to the National Academy of Medicine, joining a distinguished organization that has made important contributions to health, medicine and science. This honor underscores Dr. Jain’s role in helping shape research and health policies that improve the lives of millions of people around the world.

“Dr. Jain has brought tremendous vision and experience to University Hospitals, where he leads our overarching research enterprise,” said Daniel I. Simon, MD, President, UH Cleveland Medical Center. “We applaud this recognition of a colleague who has been with UH for 10 years, and who has had such an impressive impact around the world.” 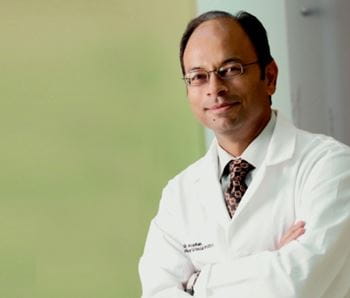 Through his role as UH Chief Scientific Officer, Dr. Jain also holds the endowed position of Chief Scientific Officer for the Harrington Discovery Institute at University Hospitals in Cleveland, Ohio – part of The Harrington Project for Discovery & Development – a $300 million international initiative to advance the development of medical breakthroughs by inventive physician-scientists for societal benefit. Under Dr. Jain’s leadership, the institute provides over $15 million each year in financial support to 35 Harrington scholars across North America and the United Kingdom, as well as support to physician scientists in the Cleveland community.

Dr. Jain also serves as Chief Research Officer for University Hospitals Harrington Heart & Vascular Institute and holds the endowed position of Ellery Sedgwick Jr. Chair & Distinguished Scientist. He also is Vice Dean for Medical Sciences at Case Western Reserve University School of Medicine, where he is a Professor of Medicine.

Marco A. Costa, MD, President, UH Harrington Heart & Vascular Institute noted, “In addition to his scientific and leadership contributions, what is particularly impressive is the enormous commitment that Dr. Jain has made in educating and training others. Indeed, many of his trainees now grace the faculties of the most prestigious institutions in the country and constitute the next generation of leaders in cardiovascular medicine.”

He came to UH in 2006, beginning his UH career as the Chief Research Officer for UH Harrington Heart & Vascular Institute. Under his direction, the program has grown to include more than 100 faculty, trainees and other staff. National Institutes of Health (NIH) funding for cardiovascular research, which is awarded through Case Western Reserve University School of Medicine, exceeds $35 million since its inception. The UH Harrington Heart & Vascular Institute’s clinical trials program has 95 active drug, device and stem cell trials, following more than 2,700 patients.

The National Academy of Medicine (NAM, formerly known as the Institute of Medicine) is a nongovernmental organization that is part of the National Academies of Sciences, Engineering and Medicine. It provides nonpartisan research to inform health policy decisions on biomedical, science, medicine and health issues to policymakers, health leaders and the general public. To be elected is considered one of the highest honors in the fields of health and medicine, and recognizes individuals who have demonstrated outstanding professional achievement.

As noted by NAM President Victor Dzau, MD, “These newly elected members are outstanding professionals who care deeply about advancing health and health care in the U.S. and globally. Their expertise will help our organization address pressing health challenges and improve health, science and medicine for the benefit of us all. It is my privilege to welcome these accomplished individuals to the National Academy of Medicine.”

Dr. Jain is past-President of the American Society for Clinical Investigation (ASCI), one of the oldest and most prestigious honorific physician-scientist organizations in the United States. In addition to his role with ASCI, his clinical and academic contributions are recognized by numerous awards and honors including election to the American Association of Physicians (AAP) and the Association University Cardiologists (AUC). He was recipient of the 2015 Judah Folkman Award in Vascular Biology from NAVBO as well as mentorship awards from Harvard Medical School and University Hospitals. Dr. Jain is a member of the American Heart Association’s Advancement of Science and Basic Science Council, serves on multiple editorial boards and has been the recipient of numerous NIH grants.

Dr. Jain earned his medical degree at the University of Buffalo School of Medicine and Biomedical Sciences, and completed his internal medicine residency at the Beth Israel Deaconess Medical Center in Boston. He completed fellowships in research at Harvard Medical School and in cardiovascular medicine at Brigham and Women’s Hospital, Boston.

An internationally renowned specialist in cardiovascular medicine, Dr. Jain is widely recognized for pioneering studies establishing a family of genetic factors termed Kruppel-like factors as nodal regulators of metabolism, immunity and the cardiovascular system. Additionally, he has translated this work into animals and humans, efforts that bear important implications for numerous biomedical disciplines.