Since March 2022, gastroenterologists at UH Cleveland Medical Center have been using the first-to-market polyp detection system as an added layer of screening during colonoscopies. The module has an exceptionally high rate of identifying polyps (adenomas) that potentially lead to colorectal cancer (CRC) if left untreated.

“This pioneering technology directly impacts our ability to improve colon cancer screening and prevention and offers a solution that will likely reduce health care disparities in our community,” says Gerard Isenberg, MD, MBA, Chief Medical Quality Officer for the UH Digestive Health Institute. “Studies have shown that AI-assisted colonoscopy can increase polyp detection rates, and every one percent increase in adenoma detection rate [ADR] reduces the risk of interval colorectal cancer by three percent — there is currently no other technology that accomplishes that rate of success.”

The initiative is sponsored by Medtronic and Amazon Web Services to improve CRC screening and prevention in medically underserved communities. After a competitive grant process, University Hospitals was selected as one of 62 facilities in the United States to receive the donated GI Genius™ intelligent endoscopy modules. The new units will be placed at UH Main Campus in each general endoscopy room. Another unit will be moved to UH Ahuja Medical Center. Plans are in place to expand to 20 modules throughout the health system, improving access to Greater Cleveland communities.

“This pioneering technology directly impacts our ability to improve colon cancer screening and prevention and offers a solution that will likely reduce health care disparities in our community.”

The five-year survival rate for people diagnosed with localized stage CRC is 91 percent. However, only about 37 percent of patients catch their cancer this early in disease progression. As a result, CRC remains the third most common and second deadliest cancer among adults in the U.S. Additionally, African Americans are disproportionately affected compared to other races. The five-year survival for CRC is lower in this racial group, with substandard outcomes impacted by reduced access to early diagnosis and optimal treatment. 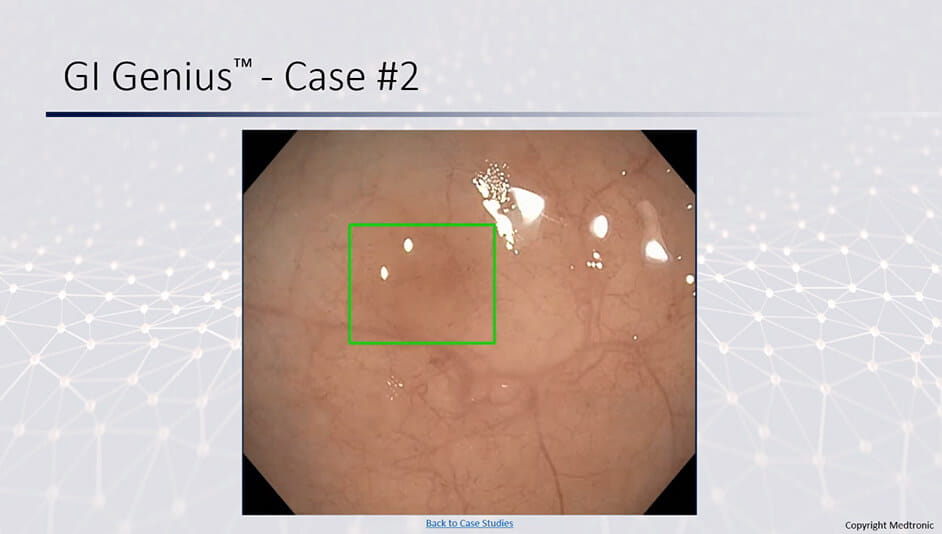 A sessile serrated adenoma (highlighted by green box) that was picked up by the AI module but not seen by the endoscopist.

Based on data from the Ohio Cancer Incidence Surveillance System, the mortality rate from CRC is higher in Northeast Ohio than it is nationally. Part of this higher incidence is attributed to the lower screening rates in underserved communities. The same database shows that early onset CRC (below age 50) is increasing in NE Ohio. “This statistic is worrisome and demonstrates why we need to start screening at age 45 in people with no risk factors as now recommended by several national organizations; even earlier in those people with risk factors,” says Dr. Isenberg.

The GI Genius module uses advanced AI software to highlight suspicious polyps or subtle changes with a visual marker in real time. Serving as the gastroenterologist’s ever-vigilant second observer, the module has a 99.7 percent sensitivity rate and less than one percent rate of false positives. “In the field of endoscopy, AI lends itself well due to the heavy reliance on visual data,” says Dr. Isenberg. “A 30-minute colonoscopy provides approximately 54,000 image frames, generating 270 GB of data to analyze. You can easily see why if one is even just slightly distracted, a polyp could be missed. These AI units function as a second observer during colonoscopy and reduce the rates of missed pre-cancerous polyps.

Authorized by the Food and Drug Administration (FDA) in April 2021, the module is the first commercially available computer-aided system to detect colorectal polyps of varying sizes, shapes and morphologies in real time. Results of the first U.S. trial of GI Genius, published in July’s issue of “Gastroenterology,” showed a nearly 50 percent reduction in missed colorectal polyps versus standard colonoscopy.

“A diagnosis of colorectal cancer is terrible news for individuals and their families,” says Dr. Isenberg. “We look forward to helping our community by providing access to a tool that will help detect lesions before they become cancers and hopefully prevent more cases.”