Approach is a solution for the current contrast media shortage, as well as other scenarios

A team at University Hospitals Harrington Heart & Vascular Institute is the first to report successfully using cardiovascular magnetic resonance imaging (CMR) for left atrial appendage closure (LAAC) pre-procedural planning in a patient undergoing the procedure to reduce the risk of stroke from atrial fibrillation. Painstaking planning for the minimally invasive procedure is necessary to accurately predict the size of the device needed and is typically done with either transesophageal echocardiogram (TEE) or coronary CT angiography (CTA). This new third option of CMR promises to help overcome some of the disadvantages of the other two imaging modalities, UH experts say, such as the significant risk of esophageal injury in old and frail LAAC patients posed by TEE and reliance on contrast media necessary for CTA, given the current global shortage.

Writing in the Journal of the American College of Cardiology, the UH team reports the case of an 82-year-old female with paroxysmal atrial fibrillation, prior stroke, heart failure with preserved ejection fraction and advanced chronic kidney disease. She was referred for the LAAC procedure due to gastrointestinal bleeding and gait instability with increased fall risk.

“The patient could not tolerate TEE due to dysphagia, and because of her kidney function, it made CT prohibitively risky for her,” says UH interventional cardiologist Steven Filby, MD.  “We thought to explore a different option, so we worked with the cardiology advanced imaging section and they came up with a protocol for MRI to be used for pre-procedural planning for LAAC. We implemented that and executed it wonderfully. It predicted the device size perfectly.”

In the time since the first LAAC case with CMR, the UH team has used the new method as a response to the global contrast media shortage with three other patients, with 100% success and 100% predicted success. 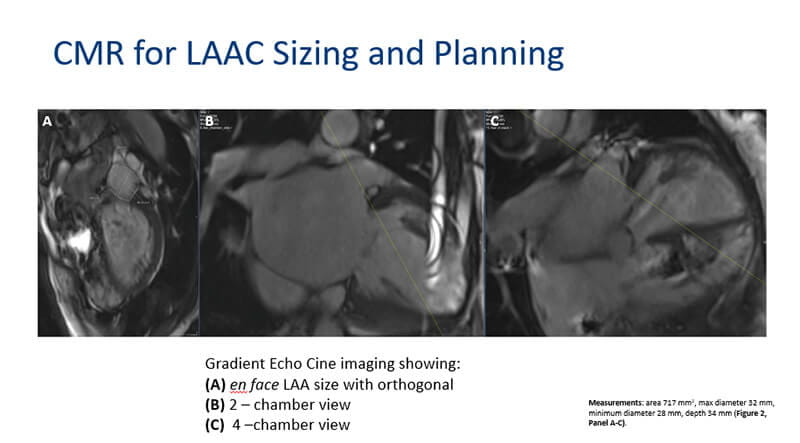 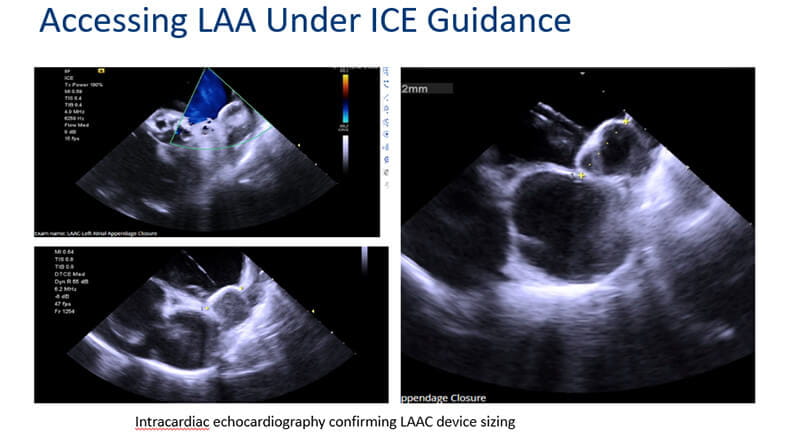 Intracardiac echo during procedure with selected device in place.

“When we were told that we had a limitation on diagnostic imaging that uses contrast, we quickly pivoted to MRI because we had already demonstrated that it was successful and effective and led to a great result,” Dr. Filby says. We’ve started doing MRI as a matter of protocol for those LAAC patients until such time that the contrast shortage is alleviated.”

Even beyond the current issues with contrast media, Dr. Filby says that the new CMR imaging modality for LAAC will prove to be an attractive option in other scenarios. There are patients with esophageal injury or varices, for example, who cannot undergo TEE. In fact, Dr. Filby says, a recent study found that as many as 80 percent of LAAC patients undergoing TEE suffer esophageal injury as a result – 40 percent having a significant injury.

“TEE is not a benign procedure,” he says. “Patients don’t enjoy it. And then when you get into situations like COVID where you don’t want to be placing a tube down the esophagus where they might then aerosolize infectious matter through cough or sputter – all these things lead to advantages of non-invasive imaging.”

The current case is not the first time UH Harrington Heart & Vascular Institute has innovated to help improve LAAC process and outcomes. Specifically, the team has studied the potential advantages of CTA as an alternative to TEE for these patients. Dr. Filby and the UH team published a prospective study of 71 LAAC patients in the Journal of Invasive Cardiology in 2021 showing that pre-procedural cardiac CTA-guided device sizing was consistent with the final deployed device in 97.2% of patients evaluated. Procedure success rate was 100%.

“UH is at the leading edge of using CT as a preferred alternative to TEE,” Dr. Filby says. “Our center has shown improved success rate, efficiency rate and safety rate with the use of CT over TEE. CT provides so much more information for planning the procedure. We feel awkward without it. MRI provides similar advantages, although with slightly less resolution than CT. Although some people would say TEE is probably the gold standard, we and the devotees of CT frankly feel that CT really outstrips TEE for planning the procedure, just because the information provided is so much more comprehensive and three-dimensional. You’re able to plan the procedure in a much more sophisticated fashion and execute it more efficiently.”

Now CMR joins CT as a non-invasive imaging alternative. Dr. Filby says he and his UH colleagues will continue to use CMR for appropriate LAAC patients long after the issues of contrast media are resolved.

“We’ve already developed the protocol for the imaging, so we’ve got the workflow down,” he says. “We’ll continue to use this as an alternative option, even after the contrast shortage resolves.”