In 1907, Oklahoma was admitted as America’s 46th state. Ford produced the Model R. And the Cleveland Zoo began relocating to Brookside from Wade Park. The year also marked the establishment of Orthopaedics at University Hospitals.

“Dr. Allen studied throughout Europe and was head of surgery at Lakeside Hospital,” says Randall Marcus, MD, the Charles H. Herndon Professor and Department of Orthopaedics Chair from 2003 to 2017. “At the time, there were only general surgeons who may have spent time doing bone and joint work, so he started a division of orthopaedic surgery that remains today one of the pre-eminent academic orthopaedic programs in the country.”

Here is a look at the past, present and future of one of the nation’s finest orthopaedic programs.

Past Department Chairs and Leaders

1924: Maxwell Harbin, MD | Was named the first Chief of Orthopaedic Surgery at Lakeside Hospital, Rainbow Children’s Hospital and Western Reserve University, serving in that role until 1953. During his tenure, the hospitals united as University Hospitals of Cleveland.

1953: Charles H. Herndon, MD | Was the sixth chairman and the first to be board-certified in orthopaedic surgery. A nationally prominent pioneer in orthopaedic research and bone transplantation, he served in the United States Army during World War II.

Over time, he expanded the department to 17 clinical faculty and nine basic scientists.

“To be a leading academic department, Dr. Herndon believed you had to have outstanding clinical faculty, and you had to lead the profession in science,” Dr. Marcus says. “Recognizing philanthropy’s role in top-notch research, he grew our endowment 10-fold during his tenure.”

Through the years, he served as president of both AAOS and ABOS, performed Ohio’s first total joint replacement and recruited lauded surgeons to Cleveland. Upon his retirement in 1982, grateful patients, colleagues and residents endowed the Charles H. Herndon Professorship.

1979: George H. Thompson, MD | Served as Division Chief of Pediatric Orthopaedic Surgery at University Hospitals Rainbow Babies & Children’s Hospital and University Hospitals Cleveland Medical Center for nearly four decades. A widely published expert in spine and hip pathology, Dr. Thompson always ensured his young patients were the center of his attention. He excelled at the balance between exceptional care and the academic mission. Retiring from clinical practice in 2018, he remains active with research, education and lectureships.

1982: Kingsbury G. Heiple, MD | Led the department through the early days of orthopaedic subspecialization. Considered an exemplary surgeon, he was involved in training over 200 orthopaedic residents and served in ABOS leadership roles from 1979 to 1985. The recipient of prestigious research awards, his investigations received National Institutes of Health (NIH) funding from 1959 to 1985. Today, the Kingsbury G. Heiple and Fred A. Lennon Professorship of Orthopaedics pays tribute to his legacy.

1983: Henry Bohlman, MD | Was among the first surgeons to pursue orthopaedic subspecialization. He led the spine center at University Hospitals Case Medical Center (now UH Cleveland Medical Center) until 2010. A pioneer of modern spine surgery, Dr. Bohlman developed an international clientele and trained 77 fellows throughout the United States. Since the time of his leadership, the Spine Division at University Hospitals Cleveland Medical Center has continued to pursue innovation, including an anterior approach for spinal surgery and the use of neuromuscular and intraoperative monitoring. In 2008, his fellowship protégés raised over $1 million in support of the Henry H. Bohlman MD Endowed Professorship in Spine Surgery. 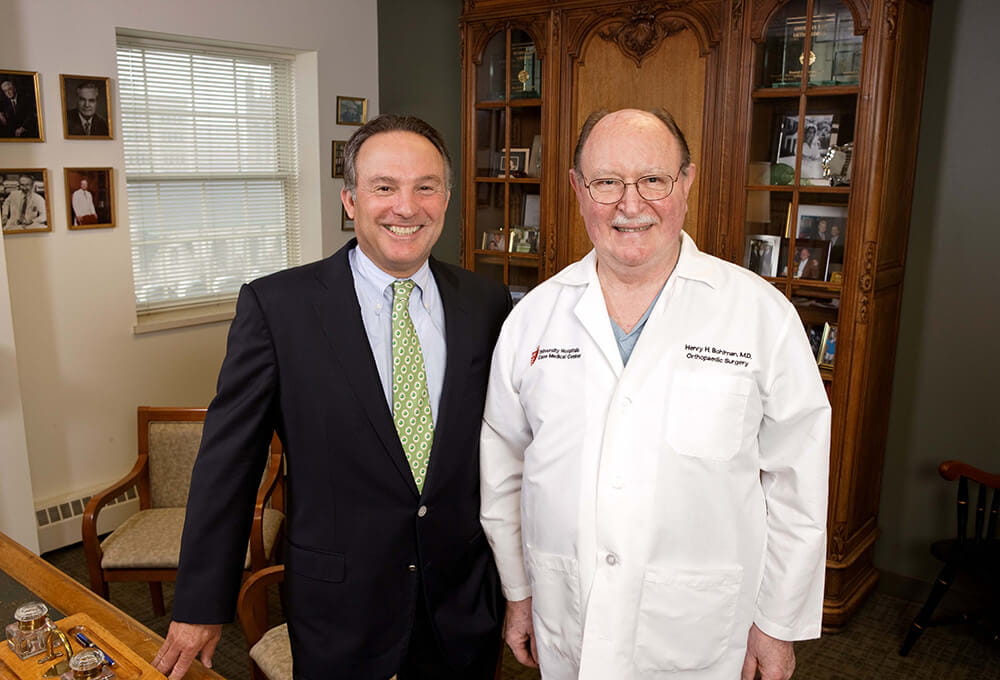 1989: Victor M. Goldberg, MD | Was world-renowned in joint replacement innovation, including biomechanics and implant design. Under his chairmanship, the department led the country in orthopaedic research rankings and NIH funding for several years. A dedicated educator, he spent his entire career at University Hospitals and School of Medicine. The Endowed Chair in Orthopaedic Surgery honors his legacy.

2003: Randall Marcus, MD | Internationally recognized expert in lower extremity reconstructive and trauma surgery who subspecialized in hip and knee replacement and foot and ankle surgery. He markedly grew the department during his 15-year tenure as chair, adding 30 surgeon and physician positions, five basic scientists and eight new practice locations. He also significantly increased endowments, evolving from one endowed professorship to 10. An elected member of numerous national and international orthopedic societies, Dr. Marcus served as president of ABOS and the Association of Bone and Joint Surgeons. Under his leadership, the orthopaedic department was ranked as a top department in the country by US News and No. 1 in funding by the NIH.

Of his 46 years spent at University Hospitals and School of Medicine, he says, “I wouldn’t have wanted to practice anywhere else. We have a tradition of excellence I am privileged to be a part of, and I have no doubt that the future of our department is very bright.”

“As we celebrate our 115th anniversary, we have such incredible respect for the surgeons who have come before us,” now, it is our responsibility to carry that excellence forward for the next 100 years.”

A Snapshot of Some of Today’s Leaders

James Voos, MD | Was appointed Chair of the Department of Orthopaedics at University Hospitals Cleveland Medical Center in 2018. A nationally renowned expert in sports-related injuries of the knee, shoulder and elbow, he is the head team physician for the Cleveland Browns. A visionary leader in orthopaedics and sports medicine, he is dedicated to the safety of athletes and active individuals at all levels of ability. Responsible for the planning, growth and operational management of the department’s clinical activities, he also oversees resident teaching and departmentwide research.

Steven Fitzgerald, MD | Is Chief of the Division of Adult Reconstruction at University Hospitals, Director of High Reliability Medicine for Total Joint Replacement and Assistant Professor at School of Medicine. A nationally recognized expert in hip and knee replacement, his system-level leadership is ensuring that University Hospitals remains at the forefront of clinical and technological innovation in the rapidly evolving field of total joint replacement.

Michael Glotzbecker, MD | Is an international expert in the treatment of pediatric scoliosis. Chief of the Division of Pediatric Orthopedic Surgery at University Hospitals Rainbow Babies & Children’s Hospital and Clinical Associate Professor at School of Medicine, he holds the George H. Thompson Chair in Pediatric Orthopaedic Surgery. With a gift for putting his young patients at ease, he also has a special research interest in improved clinical outcomes and infection prevention.

Michael Salata, MD | Is a native Clevelander and graduate of Case Western Reserve University School of Medicine. A renowned orthopaedic surgeon specializing in joint preservation, cartilage restoration and meniscus repair, he is Chief of the Sports Medicine Division at University Hospitals Cleveland Medical Center and Assistant Professor at School of Medicine. He is also the Associate Orthopaedist Team Physician for the Cleveland Browns and an active contributor to literature advancing the field of sports medicine.

What opportunities does Dr. Voos envision will propel the future of the Orthopaedics Department at University Hospitals and School of Medicine? He offers three possibilities.

“As we celebrate our 115th anniversary, we have such incredible respect for the surgeons who have come before us,” Dr. Voos says. “Now, it is our responsibility to carry that excellence forward for the next 100 years.”