An innovative surgical procedure is expanding treatment options for select patients with adolescent idiopathic scoliosis (AIS). This August, University Hospitals Rainbow Babies & Children’s Hospital became the second site in Ohio and one of about 20 nationally to offer ApiFix®, a less-invasive alternative to spinal fusion that preserves motion and function.

“In a traditional spinal fusion, vertebrae are permanently fused to correct the spinal curve, and therefore no longer move,” says Michael P. Glotzbecker, MD, Chief of the Division of Pediatric Orthopaedic Surgery and George H. Thompson, MD Distinguished Chair in Pediatric Orthopaedic Surgery at UH Rainbow Babies & Children's Hospital. “The ApiFix procedure differs from traditional spinal fusion by harnessing and retaining some of the flexibility available in the spine and allowing for movement and correction over time.”

Utilizing a posterior approach, surgeons perform a lateral midline incision to expose the spine and place three pedicle screws into anchor points along the concave side of the curve. Next, a rod is attached and tightened onto the screws. Polyaxial joints enable the device to offer 40 degrees of spherical range of motion. Toward the end of the procedure, an instrument is introduced to elongate the rod and achieve curve correction.

The unidirectional, self-extending rod passively accommodates patient growth over time. Typical length of surgery is 90 minutes to two hours, as compared to four hours for a routine idiopathic fusion. Patients return home in one to two days and resume normal activities in four to six weeks, compared to four to six months of postoperative restrictions with traditional spinal fusion.

"One of the benefits of the ApiFix procedure is that it corrects the curve and holds the spine in a straighter position, but still offers two areas of mobility within the device itself,” says Christina Hardesty, MD, Pediatric Orthopaedic Surgeon at UH Rainbow Babies & Children’s Hospital. “The goal is to leave the spine so well straightened that there isn’t a need for additional correction, but you may gain a few more millimeters.”

Dr. Hardesty and Dr. Glotzbecker first performed the novel procedure on an 18-year-old female. “She met the threshold for surgery but wanted to remain mobile,” Dr. Hardesty says. “She was interested in a procedure that didn’t definitively fuse her thoracic spine.” Now back at school, the patient was able to return home the day after surgery and is doing well. Additional patients are scheduled for the procedure in the coming weeks. 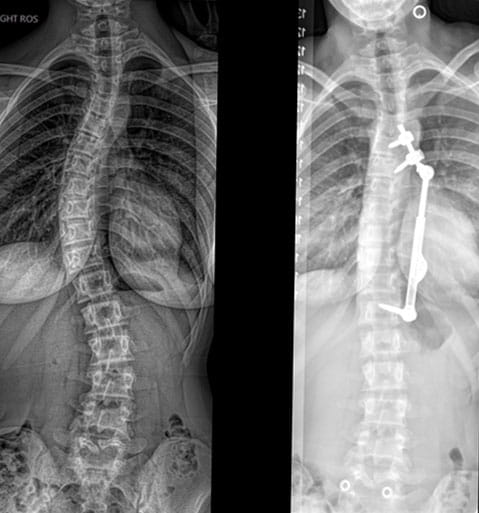 Patient eligibility criteria for ApiFix include:

Possible contraindications for the procedure include curvatures affecting the cervical spine or curvatures that are stiff and inflexible.

With nine years of clinical study, more than 500 ApiFix procedures have been performed worldwide. “The early onset scoliosis community is pretty small, and we have talked with surgeons and followed the procedure over time to ensure that patients were achieving good outcomes,” Dr. Hardesty says. “The future direction in the treatment of scoliosis is to limit the amount of fusion you are creating, and ApiFix is one more way we’re advancing that care.”

“When it comes to options for kids with scoliosis and spine issues, there is not one single solution that is best for every patient,” Dr. Glotzbecker adds. “To be the leading spine center in the region, we have to offer a full range of treatments and technologies, and this is just one of them. At Rainbow, we can take care of any patient, no matter how complex the problem.”