From UH trainee to Chair of the UH Department of Radiology

Donna Plecha’s career in medicine has taken her from radiology clinician to Department Chair of Radiology at UH Cleveland Medical Center. And it shows how an upward trajectory doesn’t always occur with the rhythm one plans for, or expects. 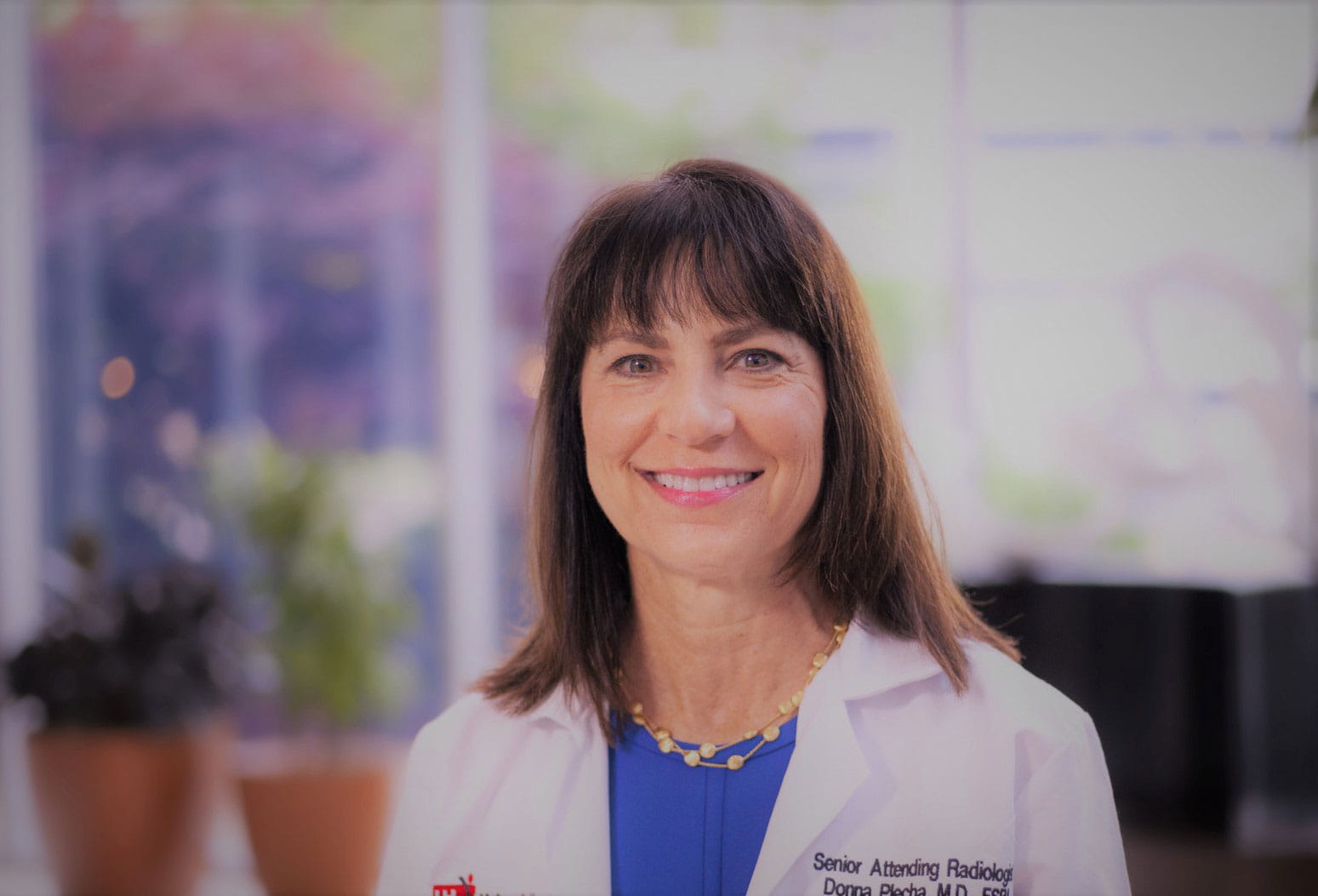 When Dr. Plecha was up for her promotion to Associate Professor of Radiology in 2013, the promotion committee wondered about her first 10 years or so as a doctor. What had she been doing, why wasn’t she academically productive?

Well, she’d had twins and another baby 20 months later. “At one point, all three children were under the age of 2,” she explained. “So for a while, I was a part-time physician.”

Still, she was doing exactly the kind of work at UH she’d trained for and wanted to do. “I always liked direct patient contact, and in radiology, you have that as a breast imager,” she says.

When she was working part-time, though, “If someone had told me I’d ever be chair of a department and a full professor, I’d have said I can’t believe that would ever happen.”

Donna Plecha grew up in Barrington, IL, just outside Chicago. Her dad was a partner in what was at the time one of the “Big 8” accounting firms, and her mother was a stay-at-home mom. No one in her extended family had been a physician, but already in high school, that’s what Donna planned for.

“I always liked math and science, which wasn’t typical for girls at the time, but also I’ve always been someone who likes to learn,” she says. “And I thought that in medicine, you can be a lifelong learner because medicine changes all the time. I wanted to be

She majored in biochemistry during her undergrad years at Northwestern University, and spent summers working in a medical research laboratory, as well as doing independent study. One of her mentors in the lab was a woman. “I was doing research on cell biology and we were looking at mutating cells,” she says. “And I mutated a cell line that helped her in her research focusing on B-lymphocyte activation. “

Not that Donna needed a sign, but that was “a pretty great thing,” she says.

“We were discovering new things,” she says, and she still has that excitement about research.

She went to medical school at Loyola University for two years, but then transferred to Case Western Reserve University School of Medicine, as her future fiancé was a student at CWRU. She graduated with her medical degree in 1988, and then did her residency training in UH’s radiology department, followed by a breast imaging fellowship, also in that department.

And she had no doubt that she wanted to stay at UH, which already had a rich history of innovations and improvements in radiology. “Our department chair in the early 2000s, Dr. John Haaga, performed the first image-guided biopsy in the world,” she said. “I knew I had the opportunity to grow in a department like this. UH is still a leader in image-guided procedures.”

But she also remembers a time when there was very little research going in breast imaging here when she became Chief of the Division of Breast Imaging, and it was difficult to cover all the clinical sites with breast imaging services, since UH grew so rapidly as a system in the past seven years.

“Yet I also knew I had the support here to make us a true academic division,” she says.

One of the most significant changes in breast imaging under her leadership was the move from what used to be the typical mammogram, to a 3-D mammogram (also known as tomosynthesis), which provides a three-dimensional and therefore more precise image of the breast – making it easier to spot cancerous growths.

“We participated in a multi-site clinical trial so women who came to UH could get a 3-D mammogram, even before the FDA had approved it,” she says. Now, it is the standard of care at UH, which is not the case at every hospital system.

She encourages women professionally in a variety of ways, including residents, “who are the future of our department. I also want to increase the number of women in medical school who are considering a leadership path.”

As division leader, Dr. Plecha hit the ground running: “I started recruiting with two physicians right out of their fellowship programs. We were able to start relationships with two vendors that helped support some early research, and the amount of research we did began to expand. As time went on, I was at the point where I was one of the top radiologists bringing substantial grant and vendor dollars into the department, and I was able to be promoted to full professor.”

She well knew, however, a dismaying statistic about women in radiology. “In this country, 25 percent of radiologists are women, but when it comes to academic chairs, only 6 to 8 percent are. You wouldn’t think radiology is a male-dominated profession, but it is. For me, as a woman doctor, it was important to take the opportunities offered – and I thought it was important for those women who would come behind me too.”

She encourages women professionally in a variety of ways, including residents, “who are the future of our department. I also want to increase the number of women in medical school who are considering a leadership path.”

So she started a group in her department for women in radiology, and there is also a national group for them. “Both are designed to grow the number of women in radiology leadership, and to help foster that,” she says. Drs. Erin Alencherry (UH GMEI '16, GMER '20) and Pauravi Vasavada lead the UH group.

“It’s made a big impact on increasing the diversity in our residency classes, and strengthening bonds, as well as starting mentorship for women residents,” says Dr. Plecha.

Recalling her own first years as a clinician, “I tell women they don’t need to be on an academic path right away, but that they might consider some kind of role that will help them grow. That’s how I had the opportunity to become a leader.”

She adds, “I’ve been fortunate to forge relationship with vendors, with PhDs in our department, surgeons, oncologists and with other radiologists, including those at other institutions, so we can collaborate. Our breast team here at UH is changing the way we practice medicine, and improving the standard of care.”

One example is “fast breast MRIs”, which take less than 10 minutes. They are a supplemental screening method for women with dense breasts, which can make it harder to find cancerous growths. Fast breast MRI detects 2-3 times the breast cancer compared to mammography.

“We are incredibly lucky to have such a rich health care presence in Cleveland, and such a history of discovery,” says Dr. Plecha. “UH has been a great place to grow up professionally – we have such a collaborative culture with other departments, and we always have patients as our focus.”

She and her husband, Dr. Ferdinand Plecha, a vascular surgeon, live in Strongsville, where in non-pandemic times, they take advantage of Cleveland’s cultural offerings, such as the theater district, art museum, and orchestra. They also are avid users of the Metroparks.

Personally, Dr. Plecha well knows the toll of breast cancer and is grateful for the vast progress in breast imaging. Her mother and three aunts all had breast cancer.

“My mom always got screened, and she did fine and survived into her 80s – she was cured,” Dr. Plecha says. “Her sisters didn’t get screened, and they all died of breast cancer.”

Some patients tell Dr. Plecha that she probably doesn’t understand how nervous they are when they get mammograms.

“But I tell them I do get nervous, every time I get a mammogram,” she says. “I understand exactly how they feel. But I get one every year.”