An enhanced inpatient unit and several current and upcoming first-in-clinic trials for pediatric cancer and blood disorder patients are among the recent developments in the Division of Pediatric Hematology and Oncology at UH Rainbow Babies & Children’s Hospital.

The hospital’s new Andrew Uhrman Inpatient Unit, part of the Angie Fowler Adolescent & Young Adult Cancer Institute, opened in early August, completing Angie’s Institute with a home-like environment for inpatients and their families. The expansive patient rooms have enough space to readily accommodate visiting family and friends. The floor also includes new age-specific lounges for kids and teens and, for patients who are well enough for physical activity, designated activity and exercise areas.

According to John Letterio, MD, Division Chief, Pediatric Hematology & Oncology, and Professor of Pediatrics at Case Western Reserve University School of Medicine, no detail has been left to chance.

“For example, the design of the floor is such that it incorporates a lot ambient light into the space, into the individual rooms and into the quarters in the space,” he says. “The lighting on the floor actually changes in the evening, trying to mimic what’s happening in outdoor spaces. That helps people maintain the cycle of their day, if you will. There’s also a tremendous amount of original artwork pieces that are within the patient rooms and in the corridors. These features can help distract patients from why they’re in the hospital to try to make it a more uplifting, bright environment.”

The expansive size and different “zones” of each patient room also mean that a parent can stay overnight there with a child or teen undergoing treatment, while still giving the patient his or her own “space.”

“We have a separate space for the care providers within the family of the patient,” says UH Rainbow pediatric hematologist Sanjay Ahuja, MD. Dr. Ahuja is also Professor of Pediatrics at the School of Medicine. “The rooms separate out their space, including a separate television at times.” 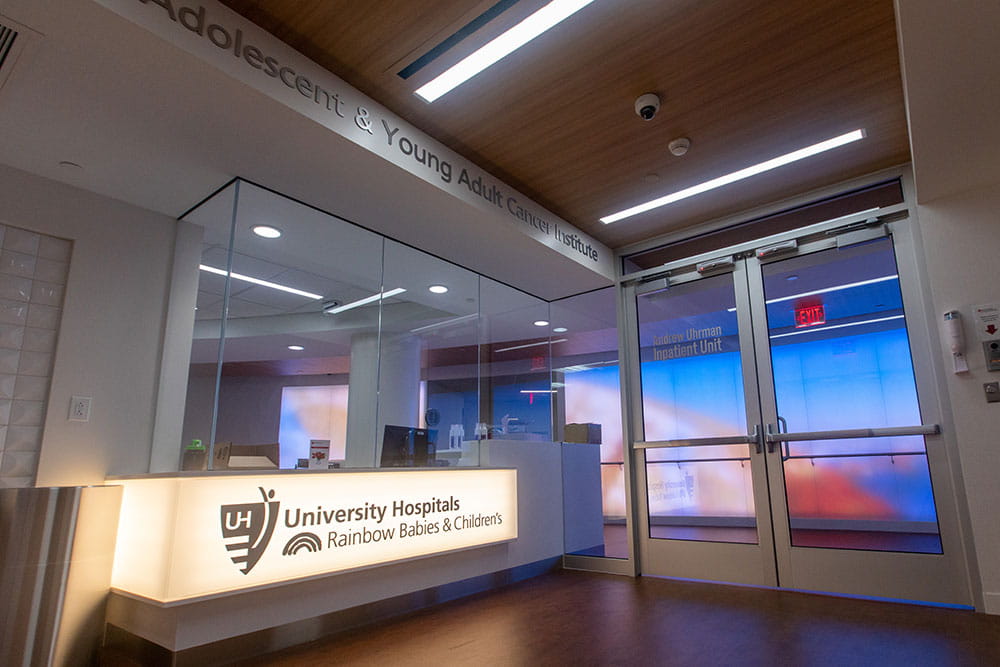 Beyond these enhancements to the physical space, there are also promising developments within the UH Rainbow Division of Pediatric Hematology & Oncology in terms of research, innovation and clinical care.

Dr. Ahuja, who leads the hemostasis and thrombosis program, points to two recent events with implications for pediatric patients with blood disorders.

“Building on the success of ClotChip technology, a locally developed point-of-care clotting monitor, our team is now developing a four-channel device,” he says. “It’s four microfluidic channels test different aspects of the coagulation pathways that may be impaired or defective in complex coagulopathies that happen when you’re treating critically ill children with cancer and blood disorders, as well as trauma. It’s in the early stages of development right now, but we just received an award from the Case-Coulter Translational Research Program and we are now pursuing funding through the Department of Defense.”

Dr. Ahuja and his team are also among the first in the U.S. to enroll patients in a novel gene therapy trial for patients with hemophilia B, delivered through a new adeno-associated viral vector made by Freeline. Over the past decade, virus-based gene carriers have gained increasing attention in both basic, pre-clinical and clinical research, and are now among the most promising vector systems for gene therapy applications.

“This is obviously going to benefit our patients and our community in general,” he says. “Current data suggests that this gene therapy restores Factor IX expression to near-normal levels in patients with gene mutations that result in complete absence of the factor. According to Dr. Ahuja, early data suggest gene therapy restores factor levels for at least 10 years. “It’s meant to be a cure, but obviously we don’t have lifetime data yet.”

In the cancer space, pediatric oncologist Alex Huang, MD, PhD, and Professor of Pediatrics at the School of Medicine, is also working to bring research from bench to bedside for pediatric patients. He has a special interest in refractory and metastatic osteosarcoma – one of pediatric oncology’s most intractable cancers.

“We have tried many, many ways to treat patients with this devastating disease,” he says. “The field and the community right now are desperately searching for the next new thing, because nothing has really worked for patients with disease that has spread to many sites in the body.”

Dr. Huang is one of the country’s leading osteosarcoma physician-scientists, serving on the Children’s Oncology Group (COG) Osteosarcoma New Agents Task Force and Bone Tumor Steering Committee. In his lab, he’s pursuing several innovative approaches to the disease. One involves a drug that has long been approved for patients with multiple sclerosis and inflammatory bowel disease – natalizumab.

”From mouse studies, we’ve developed an understanding of the factors that are very critical for these tumor systems to survive.  These factors serve as new targets for therapy and we have identified new ways to block these factors,” he says. “It turns out that one of the agents that can do that, natalizumab, is already FDA-approved.”

Dr. Huang and his team, including pediatric oncologist Kristen VanHeyst, DO, and Assistant Professor of Pediatrics at the School of Medicine, approached the drug manufacturer about using it in an osteosarcoma clinical trial, and they ultimately got the answer they wanted: yes. A Phase I trial of natalizumab in recurrent, refractory or progressive pulmonary metastatic osteosarcoma will open at UH Rainbow Babies & Children’s Hospital in the first quarter of 2021.

“That’s going to be very gratifying,” Dr. Huang says. “This project has gone from mouse studies to patients in record time. It’s preclinical to clinical translation. It is an extremely gratifying opportunity for Dr. VanHeyst, our former trainee at UH Rainbow, for whom this effort will advance her clinical translational career and build a national reputation, both for her and for Angie’s Institute. Because of this project, she’s also been invited by COG to participate in this Osteosarcoma New Agents Task Force.”

In another instance of seeking answers for osteosarcoma in unexpected places, Dr. Huang and Mei Zhang, PhD, an Assistant Professor of Biomedical Engineering at Case Western Reserve University, have identified a naturally derived compound from oat bran as a potential novel cancer therapeutic.

“It turns out that the constituent of the oat bran, the outer shell of the oat, is highly immunogenic and can stop tumor growth in mouse models of osteosarcoma, melanoma and pancreatic cancer by eliciting robust anti-tumor immune responses,” Dr. Huang says. “The biopolymer we’ve identified, BG34-200, possesses an unusual capacity to enter myeloid immune cells via CD11b molecule and trigger them to become potent, immune-stimulating cells that promote tumor immunity. BG34-200 was shown to be highly effective when administered intravenously in reducing early pulmonary metastatic osteosarcoma in immune competent mouse models.”

Already, this project has attracted funding from the State of Ohio’s Third Frontier project, Hyundai Hope on Wheels and from the Case-Coulter Program. More importantly, this novel therapy has just received approval for both Rare Disease and Orphan Drug Designation from the FDA, a huge benefit for both the clinical and the commercial development of BG34-200.  Dr. Huang says if pre-clinical research progresses as expected, the goal is to offer a Phase I clinical trial for osteosarcoma patients in late 2021 or early 2022.

For Dr. Letterio, the Director of Angie’s Institute, all of these projects demonstrate UH Rainbow’s capacity to do true laboratory-based clinical investigations and translate them into clinical practice. He, too, is involved in such efforts. He’s leading an academic-industry partnership focused on the development of a personalized cell-based cancer vaccine tailored to the individual genomics of a patient’s tumor – a multidisciplinary effort involving several biotech companies. Each company provides essential expertise, such as genomic analyses of each patient’s tumor, as well as expansion of highly specialized cells, known as dendritic cells, that are used to educate the individual patient’s immune system to recognize their specific cancer. Still another biotech is providing an investigational therapeutic, an immune system booster, that will be delivered with the dendritic cell vaccine.

“It’s a wonderful academic-industry partnership that will bring a very personalized therapy,” he says. “This represents a unique approach emerging from our research programs here in Cleveland, and that will be in the clinic first here at Angie’s Institute.”

“There are not many places that have physician-scientists who are facile in that entire continuum of therapeutic and diagnostic development,” he adds. “It starts with people like Dr. Huang and Dr. Ahuja who are driven to make a difference; their discoveries at Angie’s Institute will positively impact the lives of patients at University Hospitals and beyond.”

For more information about the Division of Pediatric Hematology & Oncology at UH Rainbow Babies & Children’s Hospital or to refer a patient, please email Peds.Innovations@UHhospitals.org.