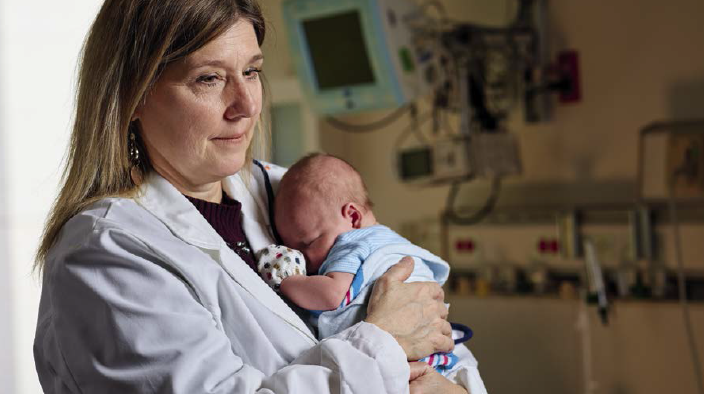 2017 UH Annual Report to the Community and Report on Philanthropy

When a newborn’s peaceful slumber is interrupted by a distinctive, irritable cry beyond what most babies produce, UH nurses and physicians often recognize the symptoms of opiate withdrawal.

Their compassionate care of babies with neonatal abstinence syndrome (NAS) goes beyond the strict weaning protocol to include comforting the infant and educating the mother.

Traci Craver, RN, CNP, Clinical Nurse Manager, Neonatal Step-down Unit, UH Rainbow Babies & Children’s Hospital, said NAS newborns are generally much fussier, exhibit light and sound sensitivity, and have feeding issues. “Right at the beginning, we provide nonpharmaceutical measures,” she said. “ If the baby has been exposed in utero, we dim the lights and the babies are snuggled and wrapped. They are held and fed frequently.”

Nurses and eight trained volunteer “cuddlers” care for the babies. Volunteers must have at least one year of dedicated experience at UH, said Traci. “These volunteers are trained to understand the signs of NAS, and provide swaddling and feeding. Sometimes the babies need to be held up to three hours until the next feeding.”

Sadly, some babies remain inconsolable and do not respond to the nonpharmaceutical measures to calm down. That’s when NAS babies begin a 10-day medication dosing regimen. “We watch them for three days on a dose, and once they receive a stable Modified Finnegan Neonatal Abstinence Score, they are weaned every day and scored every three hours,” said Traci. “Sometimes they plateau and sometimes they go backward, so it takes about two weeks. They have to be off 48 hours to ensure that they don’t rebound.”

Over the past two years, around 70 NAS babies have been seen each year, representing about five percent of NICU admissions, said Traci. “There are more who stay in UH MacDonald and go home not requiring treatment.”

Mothers of NAS babies may be currently opiate-addicted – either from street drugs or opioid medications – or in treatment. When mothers are provided a replacement drug in treatment, such as methadone, they may not know that their baby will still experience opiate withdrawal once born. Sadly, after delivery, some mothers never visit their babies and some of these infants will wind up in foster care, said Traci.

On a bright note, about 70 percent of NAS babies will stay with their mothers after hospital discharge, requiring a care plan from nurses and social workers. “We try to keep the family together and teach the parent to care for this baby and understand his or her needs,” said Traci. “We are their partners in care.”