Sedated oral endoscopy with biopsy has been the conventional method for diagnosing BE, but high cost and patient reluctance have hampered screening efforts. “The recommendation for upper endoscopy over the past 30 years has failed to detect most of the Barrett’s esophagus out there,” says Dr. Chak. “We have developed methods to eradicate these precancerous cells before they progress to dysplasia — either preventing cancer or catching it early — but the missing piece has been an effective strategy for early diagnosis.”

A rare but aggressive form of esophageal cancer, EAC has rapidly increased in U.S. prevalence over the past four decades. Just 20 percent of individuals survive five years past the onset of symptoms. BE, a recognized complication of gastroesophageal reflux disease (GERD), is a known precursor to EAC.

Commercialized through a licensing agreement with Lucid Diagnostics, EsoCheck is the only minimally invasive, nonendoscopic method for detecting BE that is approved for use in the U.S. The simple, affordable system uses an inflatable silicone balloon attached to a catheter that the patient swallows. Once inflated, the balloon’s proprietary ridges brush against the lower esophageal wall to collect cell samples.

The companion EsoGuard DNA laboratory test then analyzes the sample for two methylated biomarkers to determine a diagnosis. Clinical trials have found EsoGuard to be 90 percent sensitive in detecting BE. Alternatively, the cell samples can be subjected to other commercially available laboratory testing. EsoCheck screening takes less than five minutes and can be performed during an office visit by a physician or trained non-physician. 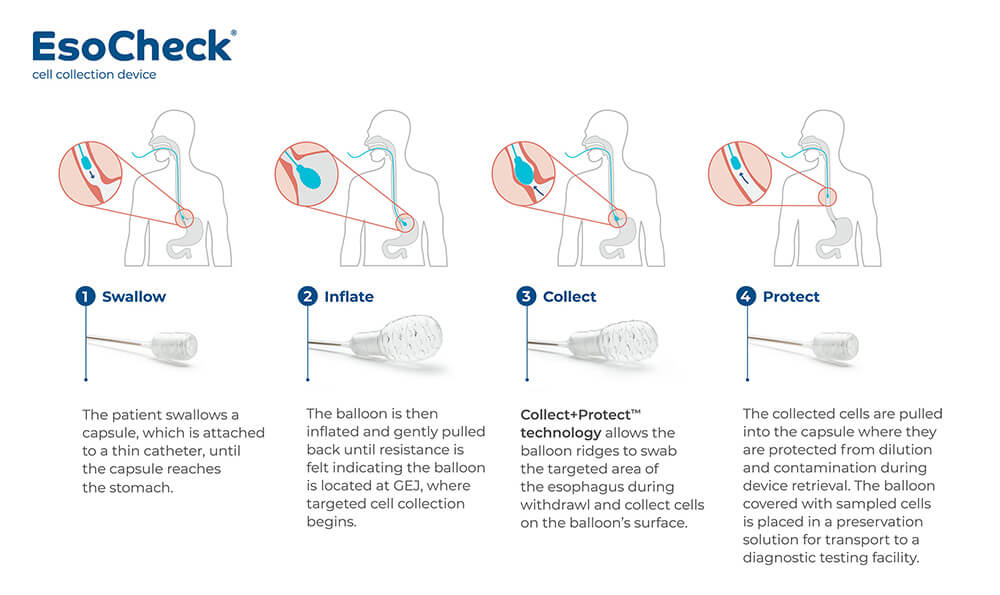 Who Should Be Screened?

Currently, the ACG recommends a one-time screening for patients with chronic GERD symptoms and three or more of the following risk factors.

Lucid Diagnostics is developing strategies to reach underserved individuals at risk for BE, setting up test centers in various cities and expanding the methodology for EsoCheck. “Now that this device has been commercially available for over a year, we’re hearing from people whose Barrett’s esophagus or high-grade dysplasia was diagnosed because of EsoCheck,” says Dr. Chak. “Just hearing that someone’s cancer might have been prevented because of something that we’ve developed here in Cleveland is terrific.”

Beyond early screening and detection for BE, the research team under the leadership of Dr. Chak and Kishore Guda, DVM, PhD, Associate Professor at the Case Comprehensive Cancer Center, has identified that a key molecular signal, the Ephrin B2 (EphB2) Tyrosine kinase pathway, is activated early in the development of EAC and contributes to cancer growth. The team’s findings were published in the November 2022 issue of the journal “Gastroenterology.”

“This discovery paves the way to better understand how esophageal cancer arises while uncovering potentially new targeted therapeutic avenues for this aggressive and refractory malignancy,” says Dr. Chak. “We are continuing to work with our oncology partners at UH to develop new clinical trials targeting this pathway in EAC as well as in patients with gastric cancer, where we found EphB2 to be similarly activated.” Along the way, he continues to grow the Barrett’s Esophagus Patient Registry, one of the only familial registries in the country dedicated to improving detection and treatment options for BE.