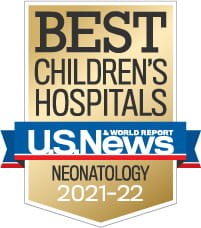 Keeping central line-associated bloodstream infections (CLABSIs) at zero over an extended period is a clear and straightforward quality goal every hospital unit attempts. But taking the goal from aspiration to reality requires a complex orchestration of many different teams and processes, plus a willingness to innovate and be open to new ideas.

The Neonatal Intensive Care Unit (NICU) at UH Rainbow Babies & Children’s Hospital is a case in point. The last CLABSI in the UH Rainbow NICU occurred in early October 2020, almost a year and a half ago. Four other units at UH Rainbow have also not had a CLABSI for more than a year, with more units close to sharing those successes.

How did this happen? In the UH Rainbow NICU, this achievement got its start when the initiative of the clinical staff was facilitated with a course in the hospital’s expansive quality improvement curriculum.

“We had a Peripherally Inserted Central Catheter (PICC) team specific to the NICU that had traditionally been our neonatal nurse practitioners and longtime nurses who would place all of our PICC lines,” says UH Rainbow neonatologist Mary Nock, MD, Co-Director of the UH Rainbow NICU. “A few of the nurses who were doing this became more interested in a more concerted effort at reducing CLABSIs. A number of us had already taken the Rainbow quality improvement course, but there were some new nurses who were interested in taking it. We all took it again, with those folks taking it for the first time focusing on reducing CLABSIs. In true quality improvement methodology, we actually tried a number of things to have bedside nurses more involved in discussion about the central lines, their integrity, their dressing changes, and duration. We tried a number of different interventions, and some really didn't work. But we did a good job as a group bouncing back from that and taking what we learned from those efforts and trying something different the next time around.”

The group ultimately coalesced around the idea of establishing the role of a central line nurse to keep a laser-like focus on central lines in NICU patients – their clinical need, their placement, their integrity and dressing changes. The central line nurse began rounding with the medical team each day, asking persistent questions: What's the need for the line? When do we think we can take it out? Is it in a good central position? How does the dressing look?

“This helps keep the medical team aware,” Dr. Nock says. “We’re the ones deciding when to take it out, when to put it in. So that really did help.”

“That has worked really nicely,” Dr. Nock says. “These nurses have really built an expertise around central line placement and positioning, and CLABSI risk. We have a lot of conversations with them, the attendings, the fellows, the medical team, trying to focus on what the best thing is with the central line for our patients. We have celebrated successes along the way. And I think the central line nurse role has been really transformative.”

The UH Rainbow NICU team has also initiated other new quality interventions to benefit its tiny patients. For example, the team created an evidence-based guideline for umbilical venous and arterial catheters – a thorny problem in neonatology. Leave it in too long, and you risk infection. Take it out too soon, and you subject fragile neonates to unnecessary and painful needle sticks that may spike their blood pressure and possibly cause intraventricular hemorrhage.

“We did a thorough literature review and had a lot of discussion in our division about how long it was safe to leave them in,” Dr. Nock says. “As a group, we got together and put together some length of placement guidelines.”

Working with colleagues in Pediatric Endocrinology, the team has also established a protocol for repeat testing of very low birth weight infants for congenital hypothyroidism before they are discharged from the hospital – beyond the initial test that is part of the Ohio Newborn Screen.

“Their Ohio Newborn Screen can be falsely normal based because of the physiology of thyroid hormones in very low birth weight babies,” Dr. Nock says. “We did find a number of babies that really needed treatment. We've had a protocol that's been pretty steady for at least three years now. We're just really working to make sure that we keep up with it, that we're testing all these babies before they go home. Our protocol is to do it at two to three weeks of age. There’s just been more and more literature that has cemented that this is a very important thing to do, plus more literature about the timing of when to do it.”

Ohio still does not require this second testing, but that hasn’t stopped the UH Rainbow NICU team from sharing its quality improvement results with other colleagues across the country.

“We have disseminated it as we've done this, talked to other places to let them know what we're doing and what we're finding: VLBW infants that have congenital hypothyroidism with normal state newborn screening. It is a cause of profound developmental delay if it's not treated. I think that all of us know now how important this is.”

Dr. Nock says this project is emblematic of the results-focused approach to quality improvement present at UH Rainbow.

“It’s one more example of a QI project with truly impactful results for our patients,” she says.

For more information on these quality improvement projects from the NICU at UH Rainbow Babies & Children’s Hospital, please email Peds.Innovations@UHhospitals.org.