“Many medical procedures can aerosolize pathogens if the patient has a viral infection such as SARS-CoV-2 or influenza,” says N. Scott Howard, MD, an airway surgeon and Director of the Voice, Airway and Swallowing Center within the University Hospitals Ear, Nose & Throat Institute. “AGPs released during intubation and other common procedures pose a significant risk to healthcare workers because airborne particles small enough to bypass ordinary surgical masks can linger for an extended period.”

In partnership with fluid dynamicist Bryan Schmidt, PhD, and his team within the Department of Mechanical & Aerospace Engineering at Case Western Reserve University, Dr. Howard has received a National Institutes of Health (NIH) Trailblazer R21 Award to investigate a novel airflow visualization method capable of detecting AGPs in clinical settings. The three-year grant, exceeding $500,000, will enable the team to quantify aerosolization risk in simulated and in-vivo conditions and recommend procedural modifications that improve provider safety.

Adapting a visualization tool called background-oriented schlieren imaging (BOS), Drs. Howard and Schmidt have overcome cost and scaling obstacles to develop a prototype capable of capturing aerosol plumes issuing from the mouth of a manikin during jet ventilation.

“BOS is a centuries-old technique used in fluid mechanics, but expanding it to healthcare is an incredible opportunity,” Dr. Schmidt says.

Although relatively simple in concept, schlieren imaging typically requires cost-prohibitive parabolic mirrors. “A point light source bounces off a mirror, over the target, and a second mirror reflects the image distortions to a special camera setup,” Dr. Howard says. “These setups can only visualize a small area, which is not useful in a clinical environment.”

Instead, the team has designed a method that employs a light-sensitive camera, a high-definition projector and an ambient-light-rejecting screen to create the necessary background pattern and allow for similar visualization of the airflows. The result is a portable, replicable system suitable for clinical settings that demand much larger fields of view. Generated air plumes are visualized by computing the apparent displacement of the background using an image-processing algorithm. The state-of-the-art software underpinning the project was developed by Dr. Schmidt in collaboration with NASA scientists. 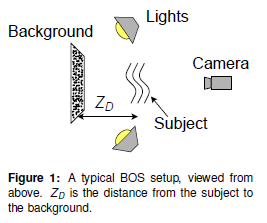 Example processed BOS image of jet ventilation on a manikin.
Last fall, Drs. Howard and Schmidt presented their proof of concept and early findings to the American Academy of Otolaryngology and the American Physical Society of Fluid Dynamics. By year’s end, they also hope to release a publicly accessible version of their software through the NIH platform.

“Every specialty has unique AGPs they are concerned about,” Dr. Schmidt says. “We are really excited to get this processing code out there and watch it take off in the hands of other physicians and scientists.”

The initial investigations are focused on jet ventilation, an AGP that delivers high-pressure oxygen to manage complex airways during surgery.

“Currently, there is no established, unambiguous way to evaluate the risks associated with AGP plumes, nor is there a rigorous method to assess risk-mitigation strategies,” Dr. Howard says. “By adjusting parameters during jet ventilation, we were able to demonstrate how the airflow changed based upon different scenarios.”

One discovery was that suction plays a significant role in reducing plume size. The team continues to vary factors, including studying supraglottic versus infraglottic suction and measuring volume of the plume while using a Hunsaker Mon-Jet tube for subglottic ventilation.

“Ventilating below the vocal cords using a Hunsaker tube appeared to produce much less volume of air,” Dr. Howard says. “We also found that higher pressures correlated with larger plumes, and higher frequencies produced smaller plumes but at a faster rate per minute.”

They also plan to study two additional procedures that carry an urgent need for risk mitigation — intubation/extubation and tracheostomy.

Prior to medical school, Dr. Howard studied aerospace engineering at the U.S. Military Academy, and he saw the value of teaming with Dr. Schmidt to apply the principles of BOS to medicine.

“We have phenomenal resources through the engineering department at Case Western,” he says. “Bryan is an exceedingly bright and innovative engineer, and our ENT leadership has made it a priority to ensure that we have the necessary resources to continue to learn and provide recommendations that improve safety for the people performing these AGPs.”

For more information, contact Dr. Howard at N.Scott.Howard@UHhospitals.org or Dr. Schmidt at Bryan.E.Schmidt@case.edu.