Screening for prostate cancer reduces cancer-related mortality, says Jonathan Shoag, MD, a urologist with the University Hospitals Urology Institute and a member of the Case Comprehensive Cancer Center. He is on a mission to counter misconceptions about screening, use his research to help clinicians improve how they screen for, diagnose and treat prostate cancer, and reduce morbidity from screening.

“All healthy men should have at least baseline prostate cancer screening” Dr. Shoag says. “We now screen smarter and are able to diagnose prostate cancer with less morbidity than before. Too many men — particularly from minority populations — develop advanced disease, and many die of prostate cancers which, if caught early, would have been curable.”

Dr. Shoag says the PSA blood test has been around since the 1980s, and by the early 1990s had become quite common. However, two large, randomized control trials published in 2009 in the New England Journal of Medicine (NEJM) raised questions about the utility of the test in preventing mortality from prostate cancer.

“One of the trials actually did not have a control group,” says Dr. Shoag. “And both trials reported with far too short follow-up, showing only nine years of data from the time of screening.”

The average man starts screening in his 50s or 60s, but the average age of death from prostate cancer is 80. It should be clear that saying screening doesn’t prevent many deaths in men followed for only nine years is inadequate, he notes.

Because of this, Dr. Shoag performed long-term modeling of prostate screening outcomes and found that if a man was followed for 25 years instead of nine, the benefits of screening are substantial, even when using very conservative estimates. Furthermore, the number needed to treat to prevent a death is likely in the single digits, he says.

Dr. Shoag’s research was published in the NEJM last year1. 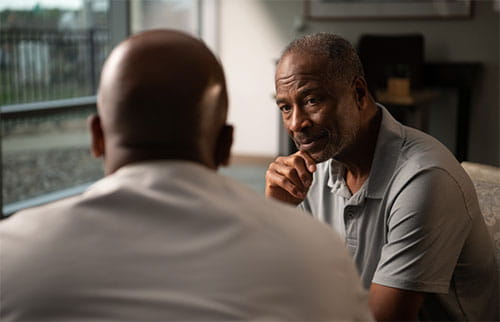 “We’re using a barbershop-type model and performing baseline PSA testing in African-American men between the ages of 40 and 49,” he says. “In addition to the PSA test, we’ll also do polygenetic profiling to understand their risk. We’re hoping to set up a dedicated pathway to follow these results and track these particular men, with the goal of implementing a best practices screening program we can implement more broadly across the community. We’ll also be connecting these men to primary care.”

This is a multi-year, multi-organizational effort led by Erica Trapl, PhD, at Case CCC, with Dr. Shoag as a primary investigator.

Most urologists have been trained to perform transrectal prostate biopsies. However, this procedure comes with risks of infection that, in rare cases, can be serious.

“We’re trying to minimize morbidity of a prostate cancer diagnosis with transperineal biopsies, which are performed through the skin and lower the risk of infection to close to zero,” Dr. Shoag says. “We give patients the choice of having the procedure with sedation or local anesthesia.”

Dr. Shoag says transperineal biopsies are standard in the United Kingdom and Australia, but are not widely used in the Midwest in the United States. He is the first physician in Northeast Ohio to use the PrecisionPoint Transperineal Access System to perform prostate biopsies.

Incorporating MRI in the screening process

University Hospitals is a world leader in prostate MRI, having recently recruited Leonardo Kayat Bittencourt MD, a prostate radiologist who sits on the international committee that makes the criteria for prostate MRI.

Prostate MRI offers several advantages, including saying whether a lesion is present to guide the decision on whether a biopsy is beneficial. If a biopsy is performed, an MRI can also tell the surgeon where to target the needle to get a better sample.