A steady diet of Motrin following a root canal and a bacteria that can predispose a person to ulcers led to a Saturday night bedside endoscopic procedure in the ICU that likely saved a renowned UH doctor’s life. 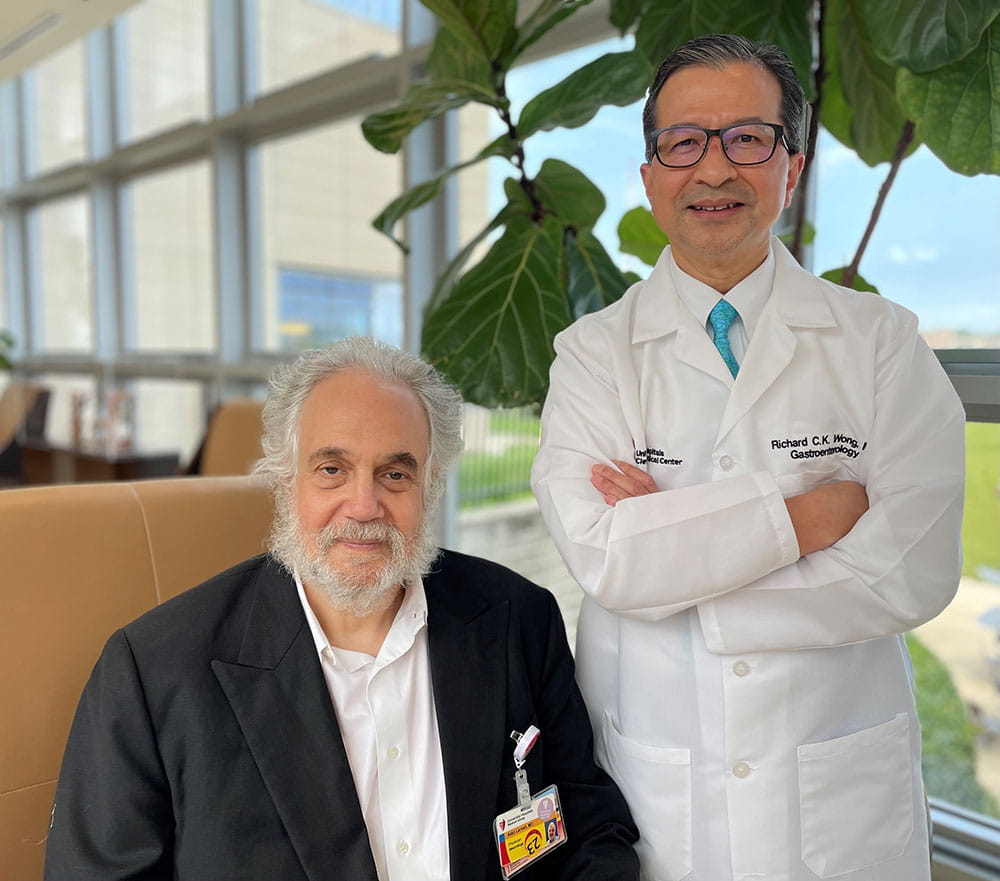 Neurologist Alan Lerner, MD, Director of UH’s Brain Health and Memory Center, likens his recent hospitalization to an “epic battle” in which a skilled gastroenterologist persisted until he found the bleeding ulcer that had caused him to lose eight units of blood. And he gained the perspective of a UH doctor on the receiving end of care, as a patient – and a recipient of blood at a time when the crisis for donations is reaching dire proportions.

Dr. Lerner came to the ED at UH Cleveland Medical Center on June 2 complaining of weakness, pain and melena, or black, tarry stools consistent with gastrointestinal bleeding. Doctors found two ulcers in his stomach, and three ulcers and erosion in his duodenum. A biopsy also revealed the presence of Helicobacter heilmannii, an uncommon and concerning bacteria with a causal relationship to gastrointestinal diseases. Dr. Lerner was treated medically with a proton pump inhibitor and discharged home from Lakeside 20 after receiving “excellent care.”

Two days later, within hours of returning home, he collapsed in the bathroom and returned to UH Cleveland Medical Center by ambulance. His blood pressure had plunged to 80/60. His hemoglobin was dangerously low at 5.4, far below the normal range of 14+.

“It was in a life-threatening range,” says Dr. Lerner, who suffered a heart attack in 2017 so is acutely aware of the need for adequate circulation. “I was so hypotensive, it was very scary. I witnessed, as a patient, how UH doctors go above and beyond. It was so dramatic.”

Fortunately, Richard Wong, MD, who specializes in GI bleeds and was a pioneer in U.S. in the use of endoscopic Doppler probes to examine GI bleeding, was the gastroenterologist on call. He came to Dr. Lerner’s bedside in the MICU to perform an endoscopy.

“If you are bleeding from an upper GI source, the stomach or duodenum, you have fresh red blood in the stool and you are hypotensive, that means you are bleeding briskly and you have probably lost at least one liter of blood,” said Dr. Wong. “It also signifies that you are already at a 30 percent chance of dying. We came in straightaway and did this endoscopy at the bedside.”

Over the next 90 minutes, Dr. Wong was engaged in what Dr. Lerner recalls as “an epic battle” to determine the source of the bleeding inside his body. Dr. Wong came across fresh blood in the stomach and duodenum. He found the previous ulcers detected on Dr. Lerner’s first hospital visit and cleared the blood around them, a time-consuming process. Then, pulling back the gastroscope, he caught a glimpse of something more in a tight, angulated area around the corner of the duodenal bulb.

“Something just didn’t seem right that Alan would be bleeding so briskly,” Dr. Wong said. “I caught a brief glimpse, half a second, and I couldn’t see it well.”

Dr. Wong sent one of his technicians from the seventh floor of UH Seidman to the ground floor endoscopy suite in Lerner Tower to retrieve a side-viewing duodenoscope, typically used for endoscopic retrograde cholangiopancreatography (ERCP). Then the source of Dr. Lerner’s bleeding was in full view.

“Finally, I could see it: a 12mm ulcer with a blood clot stuck to it, around this corner that was so acute, so angulated. It was a very challenging procedure.”

Dr. Lerner knows a proper diagnosis can sometimes be elusive, but the best doctors are tenacious. He’s grateful that Dr. Wong trusted his gut feeling that the endoscopy, which initially showed no clear source of bleeding, was incomplete.

As a patient for the better part of a week between two hospitalizations, Dr. Lerner observed the wide range of caregivers who provide not only medical care, but answer call bells, clean the room and bring the tray. He witnessed the critical importance of responding to the call – whether it’s a call bell or a page.

“Being a doctor is no guarantee you won’t get sick,” says Dr. Lerner. “There are tremendous things we learn as doctors when we become patients, about going the extra mile, being there when called upon and answering the call. You’re tired, you’re sick, you’ve been poked and prodded. You see how hard everyone works, and the nurses are a big part of getting well.”

Dr. Wong believes the use of NSAIDs like Motrin are key to the cause of the bleeding ulcer. The oral surgeon’s advice to take 800mg three times daily for two weeks was excessive. Too much ibuprofen, or even aspirin, can cause an ulcer, he said. The presence of Helicobacter heilmannii, which is in the same family as the more common helicobacter pylori, can also trigger ulcers of the gastrointestinal tract and put a patient at risk of developing gastric cancer.

The bacterial infection was treated with antibiotics, and Dr. Lerner is on the mend.

“Alan did wonderfully well after that,” said Dr. Wong.

Dr. Lerner was impressed by the urgency with which the team acted. On a Saturday night in summer, they recognized his dire condition and swiftly responded.

“They didn’t put it off, they didn’t make excuses,” says Dr. Lerner. “And it was not an easy endoscopy by any means. I know things can hide. Dr. Wong trusted his gut feeling and expertise. Only with searching did he find it.”