She also leads the hospital’s efforts in innovation 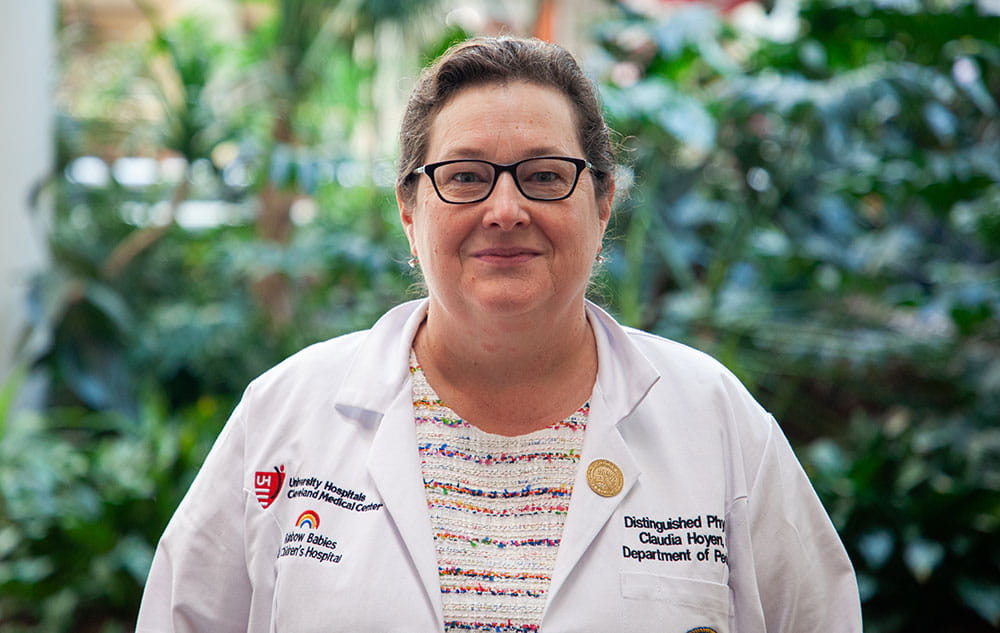 When Claudia Hoyen, MD, trained as a pediatric infectious disease fellow at University Hospitals from 1996-1999, under the direction of Bob Salata, MD, (UH Alum, Internal Medicine Residency 1979-1982) and Keith Armitage, MD, (UH Alum who did his residency training and infectious disease fellowship from 1986-1992) she never could have imagined that she and these mentors, along with later trainee Elie Saade, MD, would ultimately be helping to guide UH and Northeast Ohio through a once-in-a-century pandemic.

But that’s exactly what has happened.

“Bob and Keith trained Elie and me,” she says. “So we have this special relationship among the four of us because we have been together for so long. I feel extremely fortunate at this time to have them as my colleagues, working through this together. This one certainly takes a village.”

During the pandemic, these roles have often overlapped. She and the UH Ventures team, including Brian Rothstein, MD, have partnered with Northeast Ohio companies, including manufacturers, to try to solve the problem of securing scarce PPE – and then decontaminating it safely.

“I am delighted that my path led to Rainbow because it’s where I belong.”

“I’ve been most involved in making sure at a system level that all our providers, including our pediatric providers, have access to adequate PPE,” Dr. Hoyen says. “Like many places, we have rolled out multiple modalities in order to decontaminate the N95s.”

Beyond the standard processes, local collaborations include an effort with the NASA Glenn Research Center in Cleveland to use ozone to decontaminate masks, a project with a food service equipment supplier to use enormous food warmers to leverage heat and humidity for decontamination, and an effort with a Northeast Ohio manufacturing consortium to design and build an innovative and protective station for COVID-19 testing.

“It’s a three-sided, plexiglass booth that has gloves coming out of the front of it so that the person inside doesn’t need to be in full garb,” Dr. Hoyen explains. “They’re just wearing a mask and gloves when they put their hands in the gloves. They swab the person and then wipe it down when the next person comes.”

Dr. Hoyen credits UH Rainbow’s decision about 12 years ago to take a more deliberate approach to innovation – and to support it financially – with these recent successes – and others.

“For years, innovation just happened,” she says. “Departments usually had a little bit of money or some discretionary funds that they could use for innovation. But about 10 years ago, we as an institution decided that innovation wasn’t something that our physicians should have to pursue on their own anymore, and that they needed more support. So developed a process to help our colleagues pursue their passion, dreams and ideas.”

Dr. Hoyen is not alone when it comes to former chief residents and alumni making an impact at UH Rainbow. Her fellow resident Drew Hertz, MD, is Vice President of Community Women and Children Services at UH and Medical Director of Rainbow Care Connection, UH’s pediatric ACO. (More on Dr. Hertz in an upcoming issue of this newsletter.)

Dr. Hoyen was pediatric chief resident at UH Rainbow for academic year 1995-1996 along with current UH faculty member Andrew Hertz, MD and Kathy Mason, MD, who went on to become a board-certified pediatric critical care medicine specialists and is currently with Hasbro Children’s Hospital and the vice chair for education for the department of pediatrics.

For her part, Dr. Hoyen says she still really enjoys the medical detective work that drew her to infectious disease as a specialty so many years ago – even when answers on COVID-19 are elusive and evolving.

“Every day, we are making decisions based on limited data,” she says. “When there are no data, I try to use my experience and that of colleagues to develop solutions for situations that may be relatively similar.”

She’s a regular and reassuring presence in Cleveland media as the pandemic progresses – a role she both relishes and takes very seriously.

“Media outreach is part of practicing medicine, especially when it comes to infectious diseases,” she says. “As an infectious disease specialist, I have an interest in public health so for me, it’s a very natural extension of what I do. It is important for people to truly understand what is going on so that they can make decisions that will help keep themselves and their families safe, whether it’s making sure that they vaccinate their kids or getting a flu shot, or now with the pandemic wearing their mask and are socially distanced. All of those things are, I think, the responsibility that we have as infectious disease specialists.”

Dr. Hoyen says it was childhood experiences as a patient with doctors and hospitals that first got her interested in medicine. Her mom, a former OR nurse who had emigrated from Germany to Milwaukee as an adult, also helped. She encouraged her young daughter to become a doctor.

”I actually knew when I was in second grade that I wanted to go to medical school,” Dr. Hoyen says.

Young Claudia must not have been shy about sharing this dream. When she was accepted to medical school about 15 years later, she got a note bearing the return address of a familiar name.

Since that time, medicine has become an even bigger part of Dr. Hoyen’s family. She met her husband, Harry Hoyen, when they were in college and they both became residents at UH; he is now a hand and upper extremity trauma surgeon at MetroHealth in Cleveland. Their son, Alex, is beginning medical school at Thomas Jefferson in Philadelphia, and their daughter, Elisabeth, is beginning her senior year of high school. The family lives in Cleveland Heights, where Dr. Hoyen jokes it takes less time to drive to UH Rainbow than it takes to find a place to park there.

As she looks back on her career at UH Rainbow – and looks forward to what’s to come, Dr. Hoyen says there have been twists and turns, some borne of leadership changes at the hospital, some borne of changes to health care in general in the past 20 years. But, she says, she’s happy where she’s landed at UH Rainbow and has never been more excited and felt privileged to be here.

“I am delighted that my path led to Rainbow because it’s where I belong.”

You can send a message to Dr. Hoyen at UHAlumniCLE@UHhospitals.org. An Update on Graduate Medical Education at University Hospitals