After more than two years of construction, University Hospitals (UH) is excited to announce the completion of the expanded, and recently named, Wesley Center for Immunotherapy at UH Seidman Cancer Center.

The opening comes after a generous $10 million gift in 2020 from Kimberly and the late Joseph Wesley. “My late husband Joe and I chose to make this gift because we’re firm believers in the power of immunotherapy and want others to benefit from this leading edge innovation.”

"The Wesley Center for Immunotherapy is an incredible, state-of-the-art facility that will be a real draw for scientists because lab space is at a premium, especially lab space that is Good Manufacturing Practice and FDA-compliant for cell therapy production, which is very rare and very expensive.”

Koen van Besien, MD, PhD, UH Seidman Cancer Center Hematology Chief and Director of Wesley Center for Immunotherapy, and the Don C. Dangler Chair in Stem Cell Research says he’s honored for the opportunity to direct the new center. “This beautiful and unique facility will help us to bring top scientists to UH. It will firmly establish us among the leaders in cellular immunotherapy.”

The new expansion more than triples the existing onsite cellular therapy space, allowing for more research and discoveries. It includes: 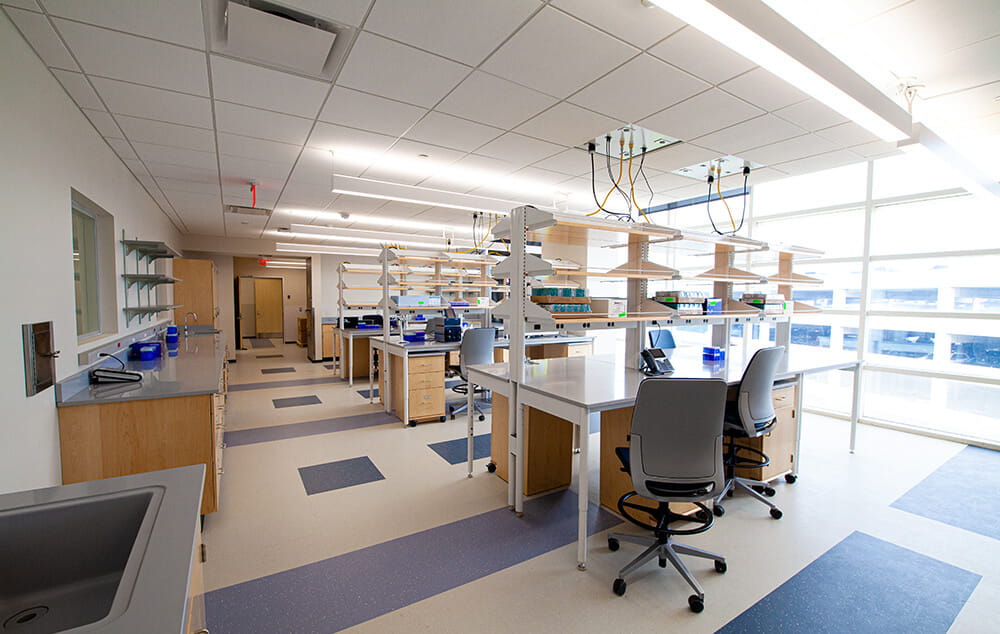 For decades, UH Seidman Cancer Center has led the way in cutting-edge immunotherapy research and has been doing cellular therapy trials since 1995. The existing lab opened in 2005 as part of the CWRU National Center for Regenerative Medicine consortium, which includes UH.

Since then, the Cellular Therapy Lab has manufactured 439 cellular products for UH and other hospitals in the region and nationally, and treated 134 patients with immunotherapy clinical trials.

"The Wesley Center for Immunotherapy is an incredible, state-of-the-art facility that will be a real draw for scientists because lab space is at a premium, especially lab space that is Good Manufacturing Practice and FDA-compliant for cell therapy production, which is very rare and very expensive,” said Ted Teknos, MD, President and Scientific Director of UH Seidman Cancer Center and the Jane and Lee Seidman Chair in Cancer Innovation.

Immunotherapy is the process of empowering a patient’s own immune system to identify and attack cancer cells. Clinical trials have shown increased rates of remission and survival as well as decreased side effects compared to conventional chemotherapy. UH Seidman Cancer Center patients who have had CAR T-cell therapy have had an 80% overall response in complete and partial remission.

"We are uniquely positioned at UH Seidman Cancer Center to lead the cell therapy revolution that is happening in cancer care. Then, with the additional talent that Dr. van Besien brings, it really positions us well to be international leaders in cell therapy,” said Dr. Teknos. "Not only will the Wesley Center for Immunotherapy at UH Seidman Cancer Center help us bring in additional talent, we’ve also created a lot of industry and academic partnerships because the lab is so effective at generating these therapies. These partners then contract with us to generate their products to be used in patients."

UH currently has many clinical trials open at the cell therapy facility which generates CAR T, NK cell and other cell-based therapies. In addition, in a Northeast Ohio first, UH experts are creating cells for CAR T-cell treatment in a one-day manufacturing protocol that can be administered after a four-day preparation regimen. This is an improvement over the previous eight-day manufacturing process and vastly different from getting CAR T-cells from a commercial vendor, which can take three to four weeks for a patient’s specifically modified cells to even arrive. This innovation allows UH Seidman Cancer Center physicians to deliver therapy in a timely manner and to more patients than would otherwise be possible.

According to the Centers for Disease Control and Prevention, cancer is the second leading cause of death in the United States. UH is poised, through its leading laboratory capabilities, strong clinical trial portfolio, and track record of success, to lead the way in addressing these challenges.