What if there were a way to stop — or even reverse — neurodegeneration on a cellular level?

Researchers at the Harrington Discovery Institute at University Hospitals in Cleveland, Ohio are studying a disruptive modification of the tau protein in the nerve cells of patients with traumatic brain injury (TBI) and Alzheimer's disease (AD). One important function of tau is to stabilize microtubules within neurons; in patients with craniocerebral trauma or disease, these microtubular structures can collapse when a process known as acetylation chemically modifies tau (known as ac-tau).

In a study published this spring in Cell1, researchers working in the Pieper Lab at the Harrington Discovery Institute discovered that reducing ac-tau could provide neuroprotection in an animal model of TBI. The team also revealed a potential link between TBI and AD, identified a mechanism-based blood biomarker that could help physicians diagnose and stage TBI, and are testing promising targeted therapeutics. 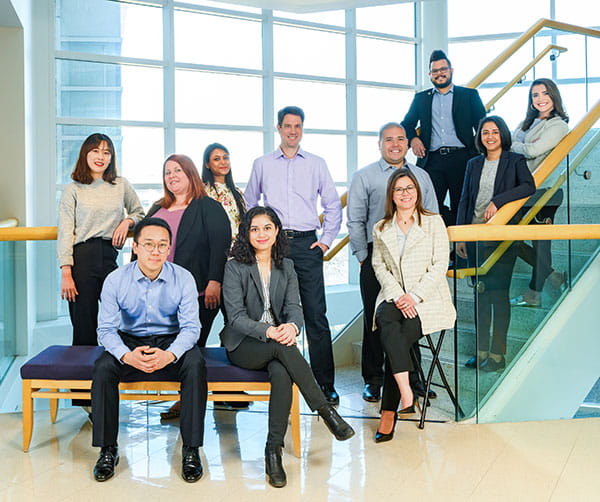 “It hasn’t been previously understood why TBI increases your chances of developing Alzheimer’s disease, but the association is well-known epidemiologically,” says Andrew A. Pieper, MD, PhD, senior author of the study, Director of the Neurotherapeutics Center at the Harrington Discovery Institute and Morley-Mather Chair in Neuropsychiatry at University Hospitals.

“We developed an experimental platform to study elevated ac-tau in TBI and identified a non-canonical nerve signaling cascade in the brain following injury that culminates in accumulation of toxic ac-tau inside nerve cells,” explain Dr. Min-Kyoo Shin, PhD, co-first author on the study. Dr. Pieper’s lab also showed that injury anywhere within the brain triggers this change to spread throughout the entire brain, providing insight into how isolated TBI can cause broad and chronic dysfunction.

By delineating the precise molecular mechanisms that link TBI to accumulation of ac-tau, the team has identified three unique points along the mechanistic pathway that are amenable to therapeutic intervention. Each point was targeted with a different drug, including the U.S. FDA-approved medications salsalate and diflunisal.

“We showed that these two NSAIDs have unexpected neuroprotective activity outside of their traditional use as anti-inflammatory agents," says Edwin Vázquez-Rosa, PhD, co-first author on the study. The intervention independently protected mice from neurodegeneration and neuropsychiatric symptoms after TBI by reducing the accumulation of ac-tau in nerve cells. Additional drugs are also showing promise in lab testing.

Through interrogating a database that included prescribing patterns and diagnoses for over 7.5 million American patients, researchers uncovered through collaboration with Dr. Feixiong Cheng of the Cleveland Clinic Foundation and Translational Therapeutics Core of the CADRC, that the use of salsalate and diflunisal was associated with decreased incidence of developing AD or significant TBI symptoms.

“As compared to aspirin, patients who were prescribed one of these two drugs had a statistically lower chance of developing either Alzheimer’s or a clinically significant TBI during the time they were taking the medicine,” says Dr. Pieper. “Of course, that doesn’t mean that they had less of a chance of suffering from an initial TBI, but it suggests that the medicine potentially protected the brain from further neurodegeneration such that patients were less likely to suffer from a clinically significant TBI. This snapshot in time doesn’t prove causation, but it is a very compelling piece of information.”

Together with collaborators at UH and MetroHealth System in Cleveland, Dr. Pieper's team is also studying ac-tau in college athletes and patients with acute brain trauma to determine if levels reduce as the brain recovers. They are also partnering with investigators at United States Military Academy West Point to study this potential biomarker of TBI, as well as Johns Hopkins University to examine blood samples of participants in the National Institute on Aging’s Baltimore Longitudinal Study of Aging (BSLA).

“Because we have blood samples drawn over a lifetime, we can track ac-tau levels for patients before, during and after diagnosis of a neurological condition,” says Dr. Pieper. “We have shown that ac-tau is more elevated in the brains of AD patients who suffered a TBI much earlier in their life, suggesting that an acute change to tau after TBI could be causing a chronic cascade that accelerates Alzheimer’s disease in people.”

By demonstrating that the magnitude of ac-tau in the blood tightly correlates with levels in the brain in both mouse and human models, the team has identified a long-sought-after blood-based biomarker to track cell deterioration and recovery in the brain.

The team has now meticulously generated genetically altered mice so that the specific sites on the tau protein cannot become acetylated after TBI. By crossing these mice with their AD model mice, they will study whether this inability to acetylate tau will protect them from an accelerated onset of the disease after TBI. Additionally, tests of targeted therapeutics are showing promise in arresting chronic neurodegeneration and completely restoring cognitive function in the laboratory setting.

“For so long, people have assumed that neurodegeneration and disease are just a normal part of aging, but these discoveries suggest a tremendous opportunity to protect people long-term from these conditions,” says Dr. Pieper. “I am joined at the Harrington Discovery Institute with a cadre of scientists keenly focused on the accelerated translation of our discoveries into therapies with meaningful potential to benefit patients.”

Harrington Discovery Institute accelerates promising discoveries into medicines for unmet needs. Physician-scientist and research-scientists face a major gap between promising scientific discoveries and new medicines due to a lack of financial resources and guidance. Interest from pharmaceutical companies and venture capitalists can only be attracted once discoveries have been shown to have strong potential for commercial success.

“Harrington Discovery Institute is a critical and unique accelerator in the drug discovery and development industry,” said Jonathan S. Stamler, MD, President, Harrington Discovery Institute, Robert S. and Sylvia K. Reitman Family Foundation Distinguished Professor of Cardiovascular Innovation and Professor of Medicine and of Biochemistry at University Hospitals and Case Western Reserve University. “We accelerate discoveries from the bench to the bedside through funding, expertise, and de-risking prior to commercialization. The result is better research that produces medicines and the potential for cures.”

Harrington Discovery Institute, launched in 2012, has 149 medicines in the making, 16 medicines in the clinic, and 11 licenses to pharma. In just ten years, its supported more than 60 institutions and launched over 30 companies in its quest for cures.