A Conversation with Dr. Sanjay Rajagopalan

Sanjay Rajagopalan, MD, is the Division Chief of Cardiovascular Medicine at the UH Harrington Heart and Vascular Institute, Division Chief of Cardiovascular Medicine, and Director of the Center for Advanced Heart and Vascular Care. On May 20, 2021, the American Diabetes Association (ADA) visited University Hospitals to film Dr. Rajagopalan and the Center for Integrated Novel Approaches in Vascular-Medicine Disease (CINEMA) for the ADA series “Thought Leadership Film Series.” 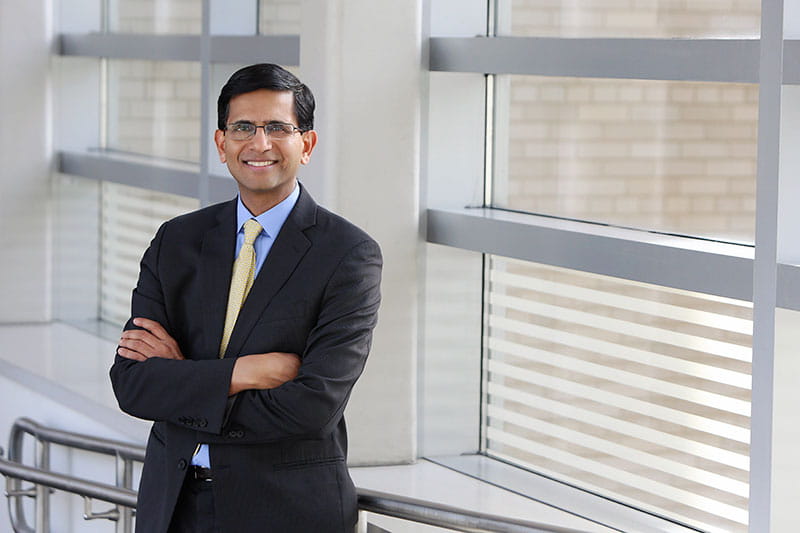 Dr. Rajagopalan explained in his ADA interview that cardiologists are uniquely positioned to assist with the huge seismic shift that is occurring in the landscape of diabetes care. As a result, ADA wants to shine the spotlight on cardiologists in the 2021 series, “Thought Leadership Film Series” to profile partners at the forefront of research and improve the lives of people affected by the disease. ADA believes CINEMA has the potential to make an incredibly valuable addition to this year’s series, as its work could be of great benefit to the diabetes community.

In addition to featuring Dr. Rajagopalan in this important series, he was also recognized earlier this year with the American College of Cardiology Distinguished Scientist Award and was elected as a member of the Association of American Physicians (AAP), the oldest honorific physician organization in the USA. As a result, UH R&E thought it would interview Dr. Rajagopalan to learn more about why he chose to become a cardiologist, the mentors throughout his training, and how he became passionate about patient care and research for the global health issue of diabetes.

Q: Can you tell us a bit about yourself? Where did you grow up? When did you know you wanted to become a doctor?

A: I grew up in India in a middle-class family where education was everything. My father moved to the United States in his late 30’s and completed his masters of education at the University of Georgia in Athens but returned to India. In addition to my Dad, my paternal uncle, a cardiologist in Toronto, had a significant impact on me, especially regarding education. My uncle sparked my earliest interest in medicine, because I saw there was a way to impact people very powerfully.

Before medical school, I thought I wanted to study neuroscience. I applied to a PhD program at the University of Texas but decided at the last minute to get my medical training done. Along the way, I met some very interesting people in cardiovascular physiology. I completed my residency training at the University of Buffalo and met my first mentor, Dr. John Canty. I became hooked on vascular biology while I completed my research fellowship at Emory University. During my time at Emory, I became interested in the mechanisms of atherosclerosis and began my pursuit of understanding blood vessels. I thought imaging approaches for blood vessels coupled with physiologic studies in patients and experimental animal models were important. I felt strongly that having a basic science lab where I could study the blood vessels in detail was critically important. I was convinced that this continuum, from animals to humans, was essential for translational science.

I launched my scientific career as a faculty member at the University of Michigan, where I met two important mentors who helped grow my initial interests in therapeutic modulation of vascular disease, Dr. Elizabeth Nabel and Dr. Bert Pitt. My second faculty position was at Mount Sinai, where I met Valentin Fuster, MD, who was another extraordinary influence on my life. At Sinai, I worked very closely with Dr. Fuster and owe a tremendous debt of gratitude to him. One of the key drivers and main reasons I came to UH was Dan Simon and Mukesh Jain, MD, who were both involved in my recruitment, and it has been a very rewarding relationship with both of them, which I cherish and enjoy.

Q: Are there any mentors/inspirational figures that influenced you to pursue your career path in cardiovascular medicine? What experiences shaped you into the physician-scientist you are?

A: As I mentioned earlier, my uncle was a great practitioner who understood the art of medicine besides being a compassionate and highly evolved spiritual human being. Another very influential mentor was Dr. Valentin Fuster. Dr. Fuster is a giant in cardiology medicine and embodies charisma more than anyone I have known in medicine. What I learned from Dr. Fuster is how to hyperfocus on an individual. He is extremely intent on catering to the needs of each person no matter who you are and had a way of communicating despite his accent!

I realized part of the impact a physician has is ensuring that each patient has a personal connection beyond intellectual explanation of illness. Dr. Fuster provided me with a vignette of what a physician-patient relationship could be and how a physician can be so invested in a patient that he/she is willing to zoom in and hyper-focus on that individual to be there for him/her. It is a unique ability for a physician to have this skill. It is therapeutic, and part of the healing power physicians have. There are very few people who have the personal ability to meet you in the hallway for 30 seconds and connect with a person so quickly and genuinely. That really is the art of compassion, but to see it, live it, and practice it, is another dimension and skill set altogether. It can be learned; I learned some of it. I’ve learned to be mindful of what it takes to be with a patient, which has been very rewarding.

Most physicians will say they start with an intellectual understanding of medicine and think, “I am smart, I can solve problems,” but you quickly realize that is a false narrative. Most problems in medicine can’t be solved intellectually alone and instead also requires a true understanding in a different dimension to solve the problem. Science can only take you so far, but ultimately it is the quality of compassion that makes an impact. Patients know when you are not trying to impress them and when you are genuinely interested in them as a person. The art of compassion should come effortlessly from within.

Q: In addition to patient care, you are dedicated to understanding the global impact of chronic disease. What inspired you to dig deeper into this global health issue?

A: I did not have any notion of studying global health, but about 20 years ago, I found myself in an interesting space. Discussions around climate change, global warming, and air pollution began to take place. I thought it was interesting and started studying the issues as an intellectual pursuit. Over the last ten years or so, we began to think about ways the environment impacted cardiovascular health. In fact, it may come as a surprise to many that 90% of cardiovascular problems and diabetes are environmentally related. Heart disease is affected by where you live, what you eat, what you do, who your parents are, what your zip code is, how you were treated as a kid, what your habits are, etc. We are talking about a massive impact on our health, but we understand so little. What about whether you were abused as a kid? We live in a complete chemical cauldron, and yet we don’t understand any of it. What about all the food processing and additives we eat? We live in a very artificial and highly processed environment. Everything we are exposed to every day is a factor that ultimately may have ramifications.

We are faced with the ultimate existential crisis that is going to dominate our lives (if not already)…climate change. The latter is driven by what we do as humans - thousands of jets flying across the stratosphere and all the commercial vehicles spewing out pollutants and also what we consume. Our footprint is enormous. The connection between humans and what causes climate change is significant. I am very interested in the environment and how science can help understand these factors and in advocating policy changes or health behaviors to reduce the human footprint for the good of the planet.

Q: The Center for Integrated and Novel Approaches in Vascular-Metabolic Diseases (CINEMA) was established in 2019 as a platform to advance the understanding and treatment of cardiac and vascular complications of metabolic disease. How and why was this COE of excellence created?

A: I saw the need for an integrated program to manage a complex problem like diabetes. Diabetes is inadequately and woefully treated. A patient will see a doctor who gives him/her medicine, but the physician does not address all the other issues such as diet and exercise or work with the patient in a way that makes a meaningful difference. We want to provide value to our patients and provide compassionate and holistic care. We must act preemptively to prevent the onset of diabetes and treat those with the disease aggressively.

A:  A big effort in University Hospitals involves the development of a very larger cohort called CLARIFY. CLARIFY is our no-charge program, which I am very proud of. We are establishing CLARIFY Community, a next-generation Cleveland cohort that will be one of the largest prospective cohorts in the world. A cohort where we will genotype and biobank samples to understand the origins of heart disease. The goal of the cohort is to understand the genesis of heart disease by diving deep into the details of a patient's environment.

What they do and eat? How do they live? What are their habits? Do they have trees in their community? What are the air pollution and noise levels in their community? Is there evidence of adverse childhood experiences? Where you live matters, and if you do not have trees in the area, this is associated with a high incidence of heart disease. It becomes very intuitive when you think about it. Nature has a calming effect, provides a sense of relaxation, is a place with cleaner air, and reduces anxiety levels, thus lowering heart disease.

Understanding the associations of the environment with heart disease at this granular level will be transformative. We previously thought that genes shape everything, but it is the other way around. The environment influences our genetic expression. This is known to some of us who work in the field, but most people would be surprised if they were told chemicals cause diabetes or heart disease or change your gene expression. For us to start to understand this aspect of heart disease, the role played by your environment would be great for Cleveland.

Q: What is the career advice you would give to young faculty who want to be scientists?

A: Follow your heart as much not as much your mind!. How do you do that? Foster individuals to seek their passions and what truly inspires them. How do you inspire young children? Providing an unconditioned environment with nature, being a “mindful” (actually more mindless or in other words stop being a control freak!) parent, provide the environment that gives them the mechanism to realize who they really are. How do we educate people? Heart disease and our eternal connection with our physical environment should be taught in elementary school. Heart disease prevention should not be in the clinic, but in schools where we can teach students to partake in healthy behavior, respect what they eat, be “mindful” of what they do, and eat. Heart disease can be cured by teaching the value of exercise, eating healthy, and being outdoors. There should be a considerable shift in what we teach in the classroom. I would like to do this in the future.

To end our conversation, we thought it would be fun to learn a few fun facts about Dr. Rajagopalan in a round of “Five in Five”!

Tags: Physician Recognition, In The Spotlight