Q: Dr. Arruda, the CASTLE-AF trial, published in The New England Journal of Medicine in February 2018, highlights the value on ablation of atrial fibrillation in patients with heart failure. Can you summarize the importance of this study?

The CASTLE-AF investigators randomly assigned patients with symptomatic paroxysmal or persistent atrial fibrillation (AF) who did not have a response to antiarrhythmic drugs, had unacceptable side effects, or were unwilling to take these drugs to undergo either catheter ablation or medical therapy (rate or rhythm control) for atrial fibrillation, in addition to guidelines-based therapy for heart failure. All the patients had New York Heart Association class II, III, or IV heart failure, a left ventricular ejection fraction of 35 percent or less and an implanted defibrillator. The primary end point was a composite of death from any cause or hospitalization for worsening heart failure.

Q: Dr. Arruda, as you mentioned, ablation of AF in patients with heart failure has been of great interest to you and your team at UH. Can you tell us more about your study?

A: Of course, it’s my pleasure to share our experience. Catheter ablation for AF has been shown to improve left ventricular ejection fraction (LVEF). We investigated the value of catheter ablation in patients presenting with congestive heart failure (HF) with low LVEF and AF, who met criteria for an implantable cardioverter defibrillator (ICD) for primary prevention of sudden death.

We found that among the 61 patients, 37 did not meet criteria for an ICD after the catheter ablation. Patient with NICM had higher freedom from ICD indication than those with ICM (74 percent vs. 32 percent, P = 0.004). Patients with NICM free from AF or atrial tachycardia (AT) recurrence had significant improvement in LVEF and NYHA class compared to those with recurrence, whereas there was no difference in patients with ICM. During a median follow up of 3.5 years, LVEF improvement was associated with long-term freedom from AF / AT recurrence. 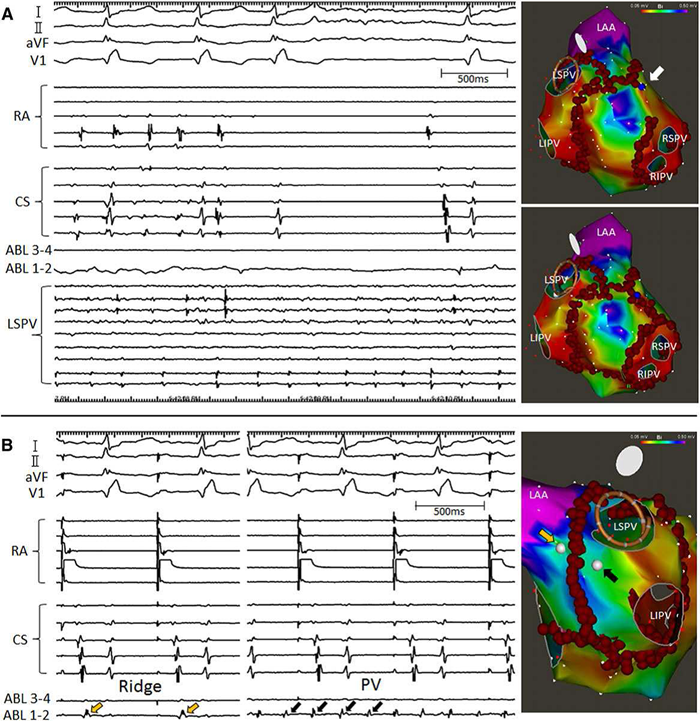 Panel A: Note AF termination during ablation at Low Voltage Area (LVA) in a patient with persistent AF. Left: AF persisted after a wide circumferential lesion around the left-sided pulmonary veins (PV). Subsequently, AF terminated while targeting LVA at the roof (white arrow) before isolating the right-sided PVs or creating additional lines. This highlights the fact that LVA outside the PVs may contribute to AF pathogenesis and its maintenance.

Panel B: The signals (EGMs) in the ablation catheter after restoration of normal sinus rhythm, showing that the AF inside the isolated left-sided PVs (black arrows) organized into the AT. EGMs outside the left-sided PVs showed the paced atrial signals (yellow arrows).