The Evolution of Academic Medical Centers

This is a good time to step back and consider what an academic medical center is, how relationships between teaching hospitals and schools of medicine vary throughout our country, and how and why they are evolving.

It is appropriate in part because of the recent success in renewing our affiliation agreement with Case Western Reserve University, but it is also important to review in light of the evolution of factors that are at play nationally in the healthcare sphere.

It was in 1895 when our Lakeside Hospital signed a formal affiliation agreement with the Medical Department of what was then Western Reserve University. The Cleveland philanthropists and leaders of our hospital, Samuel Mather and Jeptha Wade, later bought the land needed for our expansion at what is now known as University Circle. Mather, the hospital’s board chairman, also gave Western Reserve University Medical School $500,000 toward a building fund for the medical school, to create an entire medical complex that would include our hospitals. (In the early 1920s, more capital funds were raised to build Maternity Hospital and Babies and Children’s Hospital on the campus.) When Lakeside Hospital moved into its new building in the late 1920s, the hospital’s name changed to University Hospitals of Cleveland. .

A historical note:  This seal for Cleveland City Hospital (the forerunner of Lakeside Hospital) was first used in 1866. The four Latin words, translated, are benevolence, science, pity and charity. This seal served as the mark of University Hospitals of Cleveland on all printed material, plaques and awards. It was used until the mid-1970s. 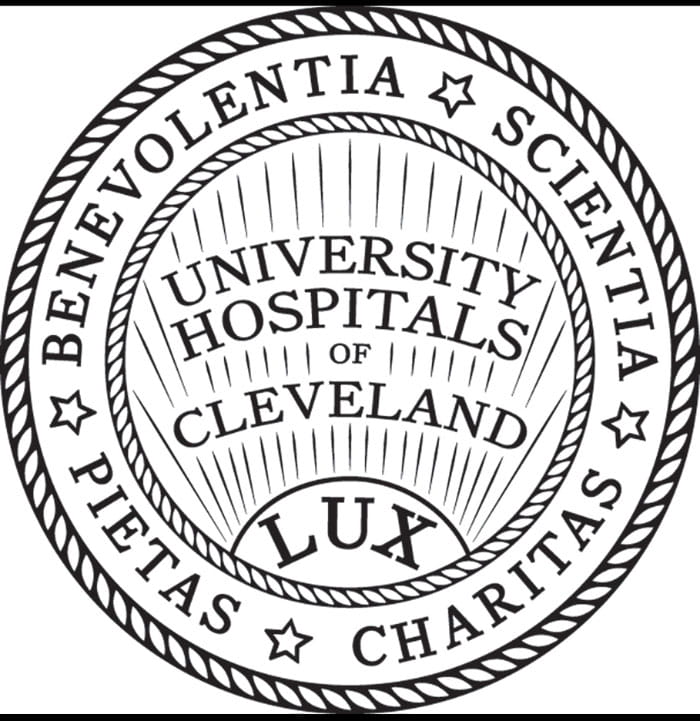 As much as the practice of medicine has been transformed in the century since our affiliation with CWRU School of Medicine began, I would say that the last decade has brought far more radical change. We, and all academic medical centers and teaching hospitals, have had to adapt to an environment that continues to rapidly change.

It’s also important to note that, across the country, the models that exist for the relationships between medical schools and teaching hospitals are extremely diverse. On one end of the spectrum of academic medical center organizational models is what might be deemed a simple and exclusive relationship – such as that of the University of Michigan, in which the university owns both the school and the hospital.

On the other end is Harvard’s Medical School, which has evolved over the past century to develop relationships with many independent hospitals, including Massachusetts General, Brigham and Women’s Hospital, the Dana-Farber Cancer Institute, and Boston Children’s Hospital.

I would say, however, that University Hospitals is moving on a path that is more similar to the Harvard model, and I expect this will be happening elsewhere in the country.

Here’s why we are moving ahead in a new way: first, because we want to redefine and advance in all three areas of our mission, patient care, teaching and research. So while we will remain strongly aligned with the CWRU School of Medicine, we will be in a multi-affiliate relationship.

Why is this important? Because will now be able to broaden and re-imagine our role in academic medicine, and we want to invest even more into it through an evolved, multi-affiliate model. We need to continue to augment our ability to serve our local, national and global communities, and we need the freedom to do that through other affiliations that we will develop.

We expect this to put us on equal footing with other Cleveland academic medical centers in the School of Medicine’s new multi-affiliate model. But, not insignificantly, we anticipate that other affiliates of the School of Medicine will assume more equitable responsibility in supporting the school.

This evolution also expands the potential to grow our global impact through biomedical and clinic research. We gain flexibility and freedom in developing new relationships to advance health care, and this will certainly lead to innovative collaboration with other institutions. In the current health care environment, this is absolutely crucial – just as the growth of our system has been.

We are proud of our institution and its historical name, therefore we also felt it was appropriate to change the name of our flagship hospital to University Hospitals Cleveland Medical Center, which is a more appropriate name for a teaching hospital in the medical Mecca that Cleveland has become. It is one that is especially apt as we return to our long standing name as we celebrate our 150th anniversary, and also in line with our naming nomenclature, as it applies to the many new UH hospitals which make up our system.

Remember, as UH’s impact grows, so do the opportunities to develop new health care solutions, more jobs and greater prosperity. And for you, our academic physicians and physician–scientists, we expect this new flexibility will open new avenues of support and collaboration to explore the frontiers of health care.

It also will promote new financial models to support research and discovery in the pursuit of new therapies and cures.

It is important to note, however, that under our new agreement, most things will stay the same: our patients will continue to receive the highest quality care from the same UH physicians in the same UH locations. UH physicians who were on the School of Medicine’s faculty will remain on the faculty and continue to teach the school’s medical students. Medical residents and fellows will continue to match to UH and train at our main campus and enjoy our longstanding affiliation with Case Western Reserve University. The collaboration between UH and the School of Medicine will continue, especially in collaborating on research.

We recognize that change is always challenging. But to thrive in the extremely competitive environment in which health care finds itself, we must remember that the rewards go to the nimble, to the adapters, to those are who are energized by the freedom to continue to evolve and innovate.

As always, if you have questions and concerns, please reach out to me at Cliff.Megerian@UHhospitals.org.