Age is Just a Number

Patients deemed extremely elderly are a growing segment of the American public. The U.S. Census Bureau estimates that the number of Americans age 90 and older will quadruple by the year 2050.

As the population of older Americans grows, so, too, do the numbers of extremely elderly patients with aortic stenosis.

In the past, some structural heart disease experts have been hesitant to refer these patients for surgical procedures – even minimally invasive ones. However, recent studies are challenging these perceptions.

Results from the PARTNER I trial, published in the Annals of Thoracic Surgery in 2015, showed that transcatheter aortic valve replacement (TAVR) can result in acceptable short- and mid-term outcomes among patients age 90 and older.

Its investigators concluded that “age alone should not preclude referrals for TAVR in nonagenarians.” A single-institution study, also from 2015, reached a similar conclusion. Its group of 95 nonagenarian patients undergoing TAVR had a 30-day mortality rate of 3.2 percent – far less than the 14.5 percent mortality rate for this age group predicted by The Society of Thoracic Surgeons.

Dr. Attizzani and UH cardiac surgeon Basar Sareyyupoglu, MD, recently had the opportunity to emphasize this point. Their patient, a 102-year-old woman, was admitted to UH Case Medical Center after a week of dizzy spells, shortness of breath and an episode of syncope. Her echocardiogram revealed severe aortic stenosis, with a peak gradient of 73 mmHg and a mean gradient of 40 mmHg. 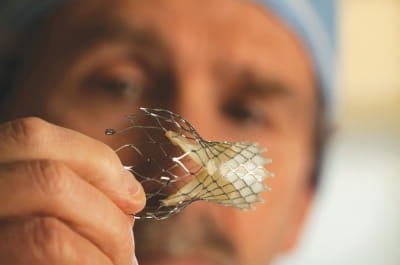 The patient underwent a TAVR procedure under conscious sedation, as has been standard practice at UH since 2012. Although the minimalist approach to TAVR is used routinely in Europe, nearly 95 percent of U.S. hospitals still subject their TAVR patients to general anesthesia. The UH Harrington Heart & Vascular Institute heart team has pioneered the minimalist approach in the U.S. and recently reported the outcomes of the first 207 TAVR patients. Results show that the minimalist approach was not only safe and effective, but also significantly lowered costs and patients’ length of stay, compared with TAVR performed under general anesthesia. The Valve & Structural Heart Disease Center at UH has performed more than 600 TAVR procedures and is the nation’s first training site for the minimalist, percutaneous, conscious-sedation approach to TAVR. 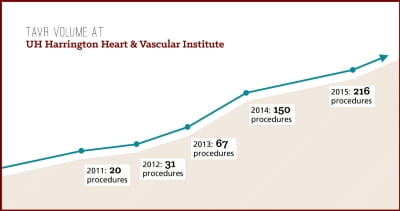 Although research shows this approach benefits nearly all patients, it may have even more advantages for those who are elderly. “Recovery is easier for patients who already may be debilitated or frail,” says Angela Davis, RN, BSN, Nurse Coordinator, Valve & Structural Heart Disease Center, who worked with this patient. “Many have impaired renal function. Not having to clear the medications used for general anesthesia can reduce their length of stay by up to a day. Patients this age may also be experiencing some dementia or memory loss. They don’t want to worry about anything that might exacerbate that.”

After her TAVR procedure, the patient’s echocardiogram showed normal aortic valve prosthesis structure and function, with no evidence of aortic valve regurgitation. “She’s now back to her normal routine,” Dr. Attizzani says.

For more information about the minimally invasive approach to TAVR employed at UH or to refer a patient, please call 216-844-3800.