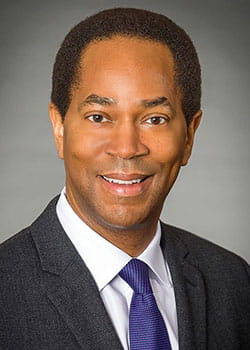 Craig became chairman and CEO on June 1, 2016. He was appointed a member of the company’s board of directors and named Eaton’s president and chief operating officer on September 1, 2015.

Formerly, Craig served as vice chairman and chief operating officer of the company’s Industrial Sector from February 2009 to August 2015. Craig joined Eaton in 2000 as senior vice president and group executive of the Fluid Power Group.

He previously worked at General Electric Company, where he had served as corporate vice president and president, GE Lighting Services Ltd., since 1999. There he led the company’s lighting business in Europe, the Middle East, Africa and India.

Craig started his career with General Electric in 1983 and later served as corporate vice president and president of GE Plastics, Greater China, and then of GE Appliances, Asia, from 1997 to 1999.

Craig earned a bachelor’s degree in psychology from California State University, San Bernardino, and a master’s degree in business administration from Pepperdine University.