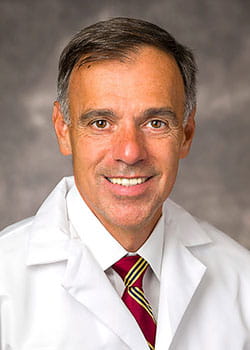 Dr. Joseph F. Sabik III was appointed to the role of Chair of Department of Surgery at University Hospitals in 2016. Prior to joining University Hospitals, he served as the Chairman of Thoracic and Cardiovascular Surgery and Director of the Cardiothoracic Residency Training Program in the Sydell and Arnold Miller Heart & Vascular Institute.

Dr. Sabik is board-certified in surgery and thoracic surgery and has specialty interests in adult cardiac surgery, valvular heart disease, coronary artery disease, surgery of the thoracic aorta, minimally invasive cardiac surgery, and off-pump coronary artery bypass surgery. He is widely published in leading professional journals and a frequent lecturer at national and international conferences. Most recently, he was co-principal investigator for the landmark EXCEL trial, which compared drug-eluting stents to open-heart surgery for select patients with left main coronary artery disease. Results were published in the October 31, 2016, issue of The New England Journal of Medicine.

Dr. Sabik earned a BS in Life Sciences from Massachusetts Institute of Technology and received his medical degree from Harvard Medical School. He completed his surgical internship and residency at Massachusetts General Hospital, where he was named Chief Resident in Surgery. During his surgical training, Dr. Sabik was appointed a Clinical Fellow and a Research Fellow in Surgery at Harvard Medical School and a Research Fellow in Cardiovascular Surgery at Children’s Hospital, Boston. Following his general surgery training, Dr. Sabik completed a residency in thoracic and cardiovascular surgery at Cleveland Clinic, and during his final year of training was the Chief Resident in Thoracic and Cardiovascular Surgery. In 1996, he was appointed to the Cleveland Clinic Department of Thoracic and Cardiovascular Surgery as a staff physician. He was named department chair in 2008.