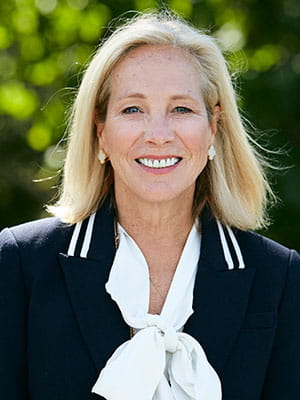 Dee Bagwell Haslam plays an active role in several companies and in the communities in which she lives. Dee and her husband Jimmy, as owners of the Cleveland Browns and investor-operators of the Columbus Crew SC, established a clear, concise direction for the organizations, focusing on three primary goals that properly respect their fans. Their vision is to build a consistently winning team, provide a great experience for the fans and give back to their communities.

The Browns Give Back strategy is centered on education, youth football and community engagement. Dee is actively involved in creating impactful solution-based programs to promote attendance, school choice and volunteerism in Cleveland, Columbus and Knoxville.

Dee spent her business career in the television production business as CEO of RIVR Media, they have produced hundreds of hours of programming including, the well-known “Trading Spaces”. Dee is also part of the family ownership group of Pilot Company.

Her community involvement in Cleveland and Columbus, also includes serving on the Board of Directors of The Rock and Roll Hall of Fame, University Hospitals System, United Way of Greater Cleveland, Greater Columbus Partnership and The Cleveland Orchestra.