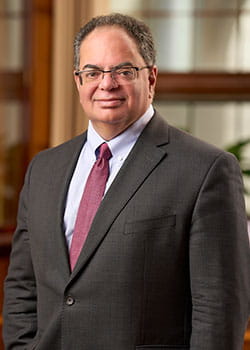 Cliff A. Megerian, MD, is Chief Executive Officer of University Hospitals (UH), a comprehensive health system with annual revenues of $5.3 billion, 23 hospitals (including 5 joint ventures), more than 50 health centers and outpatient facilities, and over 200 physician offices located throughout 16 counties. He assumed this position in February 2021. He is also the Jane and Henry Meyer Chief Executive Officer Distinguished Chair. Prior to that, Dr. Megerian served as the system’s President, a position he was appointed to in December 2019.

Previously, Dr. Megerian served as President, University Hospitals Physician Network and System Institutes, where he was charged with managing the clinical integration strategies, policies and practice guidelines for more than 2,500 UH employed physicians as well as the operations and infrastructure for 14 UH system institutes. These clinical care institutes bring highly trained sub-specialists together from multiple disciplines to collaborate on the best treatment for patients -- promoting uniform, standard care protocols and the sharing of best practices.

Dr. Megerian is also a Professor in the Department of Otolaryngology, Head and Neck Surgery, at Case Western Reserve University (CWRU) School of Medicine where he was Chair from 2012-2018 and held the Julius McCall Professorship at CWRU, as well as the Richard and Patricia Pogue endowed Chair in Auditory Surgery and Hearing Sciences at University Hospitals. As a surgeon, Dr. Megerian co-founded UH’s Cochlear implant program and he and his team have performed over 1,500 cochlear implant surgeries, making it one of the largest programs in the country. He joined UH in 2002. Upon arriving in Cleveland he also served on the physician staffs of the Louis Stokes Cleveland Veteran Affairs Medical Center and Metro Health System Medical Center.

Prior to UH, Dr. Megerian served as Director of Otology and Neurotology at the University of Massachusetts Medical Center, where he also served as Director of Residency Training, Medical Director, Cochlear Implantation Program, and Co-Director, Center for Skull Base Diseases. He also served on the medical staff of Massachusetts Eye and Ear Infirmary and Boston Medical Center.

Dr. Megerian's clinical career has been devoted to the management of hearing loss, chronic ear disease, cholesteatoma, otosclerosis, vertigo, and other otology and neurotology issues. He is also an expert in the diagnosis and treatment of acoustic neuroma. He has published over 130 peer-reviewed manuscripts and abstracts and has served as visiting professor at numerous medical schools and institutions throughout the world. His research interests in the pathogenesis of Meniere’s disease have been funded by a number of agencies including the NIH and DRF. He sits on the Editorial Board of key journals in his field and has been selected by the FDA to serve as a consultant in the regulation of Ear, Nose and Throat Devices. He has been appointed by the American Academy of Otolaryngology to represent the Academy on the Joint Committee on Infant Hearing (JCHI).

Dr. Megerian is a graduate of the University of Michigan Medical School and completed a residency in otolaryngology-head and neck surgery at University Hospitals of Cleveland and at Case Western Reserve University. He completed a research and clinical fellowship in otology and neurotology at Harvard Medical School, Massachusetts Eye and Ear Infirmary. In 2009 he completed a certificate program in health care management at Weatherhead School of Business at Case Western Reserve University. In 2017, Dr. Megerian was elected for a six-year term on the American Hospital Association’s Regional Policy Board. He was recently elected to the board of the Ohio Hospital Association.