The Division of Neonatology at University Hospitals Rainbow Babies & Children’s Hospital is internationally recognized as a leading educator of pediatricians and neonatologists. Program graduates hold senior positions in neonatology at leading medical institutions worldwide. The division has a rich tradition of writing and editing leading textbooks in the field including: Neonatal-Perinatal Medicine (Fanaroff, Martin, and Walsh), Care of the High Risk Neonate (Klaus and Fanaroff), Procedures in Infants and Children (Walsh and Krug) and Neonatology at a Glance (Fanaroff and Lissauer).

The Neonatal Intensive Care Unit (NICU) at UH Rainbow Babies & Children’s Hospital has nitric oxide, ECMO and a full complement of pediatric subspecialists and surgeons available for our patients. A new, state-of-the-art NICU at UH Rainbow Babies & Children's Hospital opened its doors in spring 2009. The NICU has approximately 1,200 admissions each year, including nearly 200 very-low-birth-weight infants and a broad variety of neonates transported to Rainbow from community hospitals and other tertiary units.

We are a founding member of the National Institutes of Health Neonatal Research Network which has performed landmark clinical trials providing the foundation for the practice of evidence-based medicine. Avroy Fanaroff, MD, Professor Emeritus, played a leadership role in the NICHD Neonatal Research Network since its inception. Michele Walsh, MD, Division Chief, and Anna Maria Hibbs, MD, currently guide these efforts.

The Division has numerous strengths and areas of interest. Maureen Hack, MD, (deceased) was a world-renowned pioneer in studying the long-term neurodevelopmental outcome of low-birth-weight infants and her protégé, Deanne Wilson-Costello, MD, now leads these efforts. Medical follow-up of the fragile NICU graduates is led by Monika Bhola, MD, and colleagues. Dr. Bhola also leads our Neonatal Simulation Center. Richard Martin, MD, is a leader in the field of the neurobiology of breathing, focusing on the control of breathing and airway maturation in neonates. Moira Crowley, MD, leads an active neonatal ECMO program and Dr. Walsh is the neonatology lead for the Ohio Perinatal Quality Collaborative. Thus, in addition to diverse NIH-supported research, many faculty members in the division are performing creative clinical studies and quality improvement projects with the potential for significant impact in understanding pathophysiology and management of neonates. 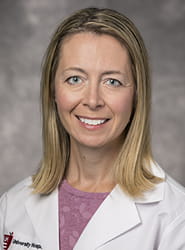 Letter from Our Directors

Learn more about our training facilities including our NICU, nurseries and high-risk clinic.

Life in Cleveland Has So Much to Offer

Whether you are interested in exploring the rich cultural history of its neighborhoods or eating at one of its many award-winning eateries, Cleveland has something for everyone.