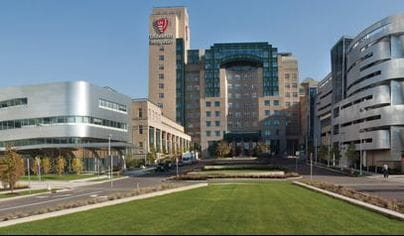 University Hospitals, named one of the nation's top 10 health systems by Thomson Reuters serves the needs of patients through an integrated network of hospitals, outpatient centers and primary care physicians.

At the core of our health system is University Hospitals Cleveland Medical Center, ranked again this year among the nation's best by U.S. News & World Report and is the primary affiliate of Case Western Reserve University School of Medicine. The 1,032 bed complex offers 24 hour emergency care with separate facilities for children and adults.

Lerner Tower opened in February 1994 as a medical/surgical in-patient facility with 210 private rooms. The Department of Neurological Surgery shares its floor in Lerner Tower and a nineteen-bed intensive care unit with the Department of Neurology. The Mather Pavilion, which also opened in 1994, mainly houses adult operating rooms, outpatient suites and ancillary services. In 1997, University Hospitals was pleased to open Rainbow, Babies & Children Hospital building, Horvitz Tower. The Department of Neurological Surgery has four newly-built operating rooms, including an intraoperative MRI machine, and are fully equipped to perform microsurgical, stereotactic and endoscopic surgery. The Center for Emergency Medicine and the Marcy R. Horvitz Pediatric Emergency Center on the UHCMC campus opened in 2011 and provides 24 hour emergency care to adult and pediatric patients in a state-of-the art facility.

UH is home to some of the most prestigious clinical and research centers of excellence in the United States and the world, including the UH Harrington-McLaughlin Heart & Vascular Institute, UH Neurological Institute, UH Transplant Institute, UH Eye Institute, UH Digestive Health Institute and the UH Urology Institute.

Located in the middle of the CWRU campus, University Hospitals Cleveland Medical Center is adjacent to undergraduate, graduate and professional facilities. Resident physicians are members of an exciting university community. University athletic facilities are open to resident physicians. A campus film society and theater provide additional entertainment opportunities. The hospital campus is a short walk from restaurants and Cleveland's world-class museums. 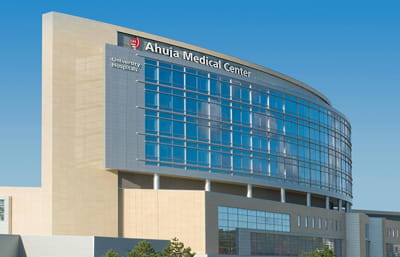 University Hospitals Ahuja Medical Center is one of our community based hospitals in the eastern suburbs of Cleveland. The UH Neurological Institute (NI) experienced a significant increase in new patient volume a few years ago, particularly a steady increase in neurosurgical volume.

Due to this growth, the NI successfully launched the expansion of neurosurgical services at UH Ahuja Medical Center. Our physicians perform complex surgical procedures including skull base surgery, aneurysm clippings, deep brain stimulator implantation and brain tumor resections at UH Ahuja in addition to cervical and lumbar spinal fusions. We now provide around-the-clock neurological expertise to patients presenting at the UH Ahuja Emergency Department as well as inpatients who are transferred to UH Ahuja with complex neurosurgical conditions that were previously only able to be treated at UH Cleveland Medical Center. It has become a rotation for our chief residents which gives them a more independent practice experience and helps with the transition to practice. 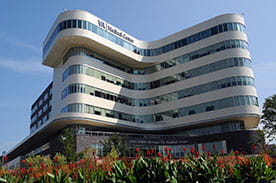 Residents rotate through the VA in their third and fourth years and gain valuable experience treating primarily degenerative spinal conditions in the operating room and in the ambulatory setting both pre- and post-operatively.

During the senior resident years, trainees are offered a unique experience to work on refining their skills in spinal neurosurgery. Stationed at two satellite hospitals within our hospital system - University Hospitals St. John Medical Center and Southwest General Medical Center - the residents are able to see how community practice is run outside of the academic center. Focusing on resident education in advanced training focused in spinal disorders, the rotation features an apprenticeship model where residents participate in clinic twice a week with three operative days to refine surgical skills. Beginning with the workup of the patient, the resident can follow the patient's care all the way through the post-operative outcome and outpatient follow-up during this rotation. The case complexity is diverse but focused to the treatment of spinal disorders. Residents can also elect to spend time performing an enfolded spine experience during their off-service time to advance their surgical skills and focus on the treatment of spinal conditions further.