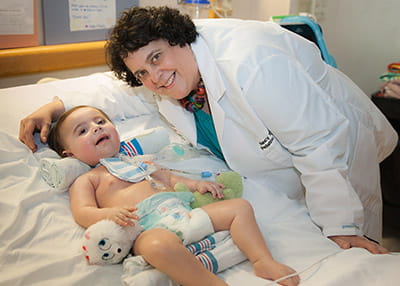 Spinal muscular atrophy (SMA) is a neurological disease caused by a defect in a specific gene called the survival motor neuron 1 (SMN1) gene. SMA is considered the No. 1 genetic cause of death for infants but, thankfully, is quite rare, affecting approximately 1 in 10,000 babies.

At University Hospitals Rainbow Babies & Children’s Hospital, our dedicated specialists embrace new treatment options as they strive to provide a comprehensive, team approach to the treatment and care of SMA patients of all ages.

The gene that causes SMA is recessive, which means that both parents must carry the abnormal gene for their children to be at risk for the disease. When this is true, one in four pregnancies will result in SMA. One in every 50 adults may be a carrier of the recessive gene.

In patients with SMA, both copies of the survival motor neuron gene 1 (SMN1) are defective. As a result, these genes do not produce a protein that is required for the proper function of the nerves in the spinal cord which control muscle movement. Without this protein, the muscles do not receive the messages they need to move properly so they become wasted and progressively weaker. This can include those muscles necessary for breathing and swallowing so the condition has the potential to be life-threatening.

Some patients may never sit or walk unaided, or, if they do learn, may lose these skills as the disease progresses. Cognitive function is not affected by the disease.

SMA may become symptomatic at different stages of life and is categorized as four types:

Signs of SMA present in the first three to four months of life and may include sucking/swallowing problems and severe progressive muscle weakness. This is the most severe form of the disease with a typical life span of 2-6 years. Death is most often due to respiratory failure.

This type of SMA has a later onset of symptoms that progress more slowly. Children develop the ability to walk, but many lose this skill over time. The symptoms appear between 18 months of age and adolescence. Symptoms include clumsiness, difficulty walking and muscle weakness. Patients typically live well into adulthood.

This type of SMA affects adults in the 30s and 40s and results in a mild to moderate walking disability.

The symptoms of SMA Type 1 show up within the first six months of a child’s life. Early diagnosis is key to treating SMA. As time passes the motor neurons are lost and can’t be restored. The earlier treatment can be started, the better chance for slowing the progression of this disease.

Parents who are planning a pregnancy can learn if they are carrying genes for inherited disorders by analyzing small samples of blood or body tissues gathered from a cheek swab or blood draw. Expecting parents can also consider genetic testing during pregnancy. Early diagnosis can be completed through standard newborn screenings. Although progress has been made, there are still many states that do not include SMA as a part of standard screening completed for newborns.

Historically, SMA has been considered virtually untreatable with medical management used primarily to ensure adequate nutrition and avoid or delay respiratory failure. With the recent breakthrough in treatment such as gene replacement therapies, the specialized team at UH Rainbow Babies & Children’s is pleased to offer new hope for SMA patients and their families.

Gene therapy can be a fitting treatment for diseases caused by a single gene mutation, like SMA. It targets the cause of disease by delivering a working copy of the gene into motor neuron cells. Treatment is delivered by a one-time intravenous ( IV) infusion into the vein to reach the cells that need the SMN (survival motor neuron) protein that the faulty gene is not producing. A vector, which is virus without the parts that cause disease, delivers the new working gene into the cells. If given early in the course of the disease, this treatment can potentially halt the progression of this disease and in some cases, when given before symptoms develop, ( pre-symptomatically) can result in normal motor milestones for the child.

In December 2016, the FDA approved the first prescription drug for the treatment of adults and children with spinal muscular atrophy. The medication, Spinraza (nusinersen), is injected directly into the fluid surrounding the spinal cord and has shown great promise when used to treat infants. Improvements in motor milestones such as head control, sitting, rolling, crawling, standing and walking have been reported.

In May 2019, the FDA approved the second drug, Zolgensma (Onasemnogene abeparvovec), which is a viral vector gene replacement therapy. It is approved for clinical use in the U.S. for children under 2 years old with all types of SMA. In clinical trials for SMA type 1, researchers described improvements in respiratory and motor function, which lead to fewer and less lengthy hospitalizations compared to what patients traditionally face.

Learn more about virtual visit
Schedule Online
Back to Top