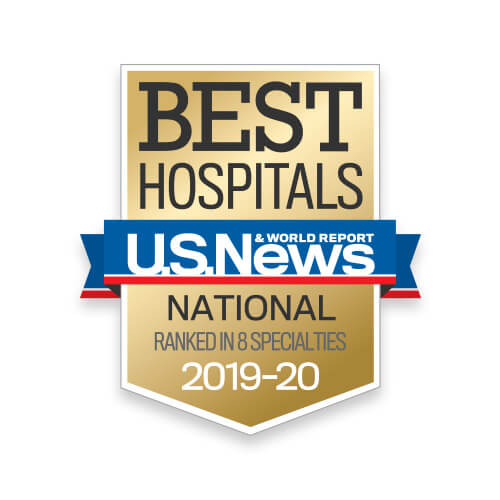 The annual Best Hospitals rankings and ratings, now in their 30th year, are designed to assist patients and their doctors in making informed decisions about where to receive care for challenging health conditions or for common elective procedures.

UH Cleveland Medical Center ranked in the top 50 nationally in:

Our Orthopedics specialty was rated as high performing.

Every top 50 ranking places UH in the top 1 percent of hospitals nationally. Only a small fraction rank highly in as many categories as UH Cleveland Medical Center.

“Every specialty ranking by U.S. News & World Report reflects the tireless efforts of the entire UH community – physicians, nurses, caregivers and volunteers. I thank them for their hard work and dedication that have made this achievement possible. Our commitment to excellence continues, as we carry out our vital vision: Advancing the Science of Health and the Art of Compassion,” said Thomas F. Zenty III, Chief Executive Officer of University Hospitals.

For the 2019-20 rankings and ratings, U.S. News evaluated more than 4,500 medical centers nationwide in 25 specialties, procedures and conditions. In the 16 specialty areas, 165 hospitals were ranked in at least one specialty. In rankings by state and metro area, U.S. News recognized hospitals as high performing across multiple areas of care.

“For 30 years, U.S. News has strived to make hospital quality more transparent to health care consumers nationwide,” said Ben Harder, managing editor and chief of health analysis at U.S. News. “By providing the most comprehensive data available on nearly every hospital across the United States, we give patients, families and physicians information to support their search for the best care across a range of procedures, conditions and specialties.”

The U.S. News Best Hospitals methodologies in most areas of care are based largely on objective measures such as risk-adjusted survival and discharge-to-home rates, volume, and quality of nursing, among other care-related indicators.